Yep, Sitting on Senator Ted Cruz's Lawn Will Get You Arrested As Climate Change Protesters Discover

Photo by Reggie Mathalone
Jenna Hanes, forefront, was among eight protesters arrested Monday at Sen. Ted Cruz's home.
Members of a group of activists who walked all the way from New Orleans to Houston to bring awareness to climate change, experienced an up close and personal with Houston police Monday who arrested eight of them after repeatedly telling the protesters to get off the grass at Sen. Ted Cruz's house.

Calling themselves Generation on Fire, the Sunrise Movement group says it wants to draw attention to both the climate and the economic crisis and has what it thinks is a solution of benefit to both concerns. They want President Biden to establish a Civilian Climate Corps as part of his American Jobs Plan whose members would go to work fighting the effects of climate change. Preferably no later than the end of the summer.

Cruz, noted for his climate change denials, does not agree there has been global warning. Hence he was a target on the march taking in hundreds of miles. While even most Republican politicians now agree there have been man-made effects on climate change, Cruz has stood fast in his beliefs, issuing some pretty entertaining claims from time to time.

You have to wonder if Cruz's neighbors ever get tired of the protests outside his house.
Photo by Reggie Mathalone
Carrying signs saying:  “Our Homes Flood, Our People Freeze, Cruz Abandons Us,” and “Whose Side Are You On, Biden?", members of the group want Biden to stop negotiating and instead go ahead and hire 1.5 million people for the climate change corps.

The Cruzes' dog Snowflake, who became famous after being left behind at home during the height of Winter Storm Uri when the Cruz family decamped to Cancun, could be seen watching from the front door.

Many of the marchers stayed on the right side of the law (and in the public right of way or the sidewalk, thereby avoiding arrest. But a few plunked themselves down on the Cruz front lawn and refused to budge until they were led away in handcuffs.

Cruz's home wasn't the only stop on the march from the Superdome in New Orleans, The group also stopped off at the $9.5 billion plastics facility in St. James Parish, LA.

This is the third Sunrise Movement escalated action directly targeting federal politicians in recent weeks including Biden at the White House and Speaker Pelosi’s San Francisco home and it will not be the last. Sunrise Movement is using this protest as a call to action, recruiting young people from across the country to join them for an even larger rally in DC on June 28.

Here are some more scenes captured by photographer Reggie Mathalone at the Monday protest:

Time's up.
Photo by Reggie Mathalone 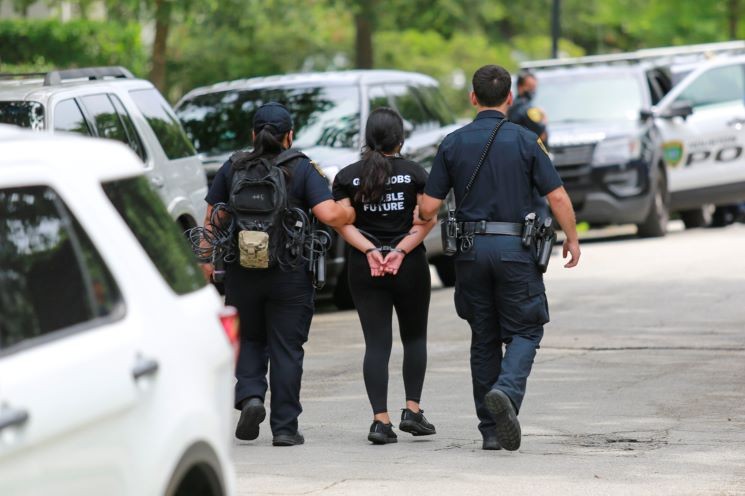 A walk and a ride to the station.
Photo by Reggie Mathalone

At least the protesters got the attention they wanted to get across their message.
Photo by Reggie Mathalone

Clearly the police and the protesters share a lot of the same fashion color choices.
Photo by Reggie Mathalone

And yes Snowflake, who was left behind when the Cruzes flew to Cancun during winter storm Uri, watched over it all once again from behind the front door.
Photo by Reggie Mathalone
California Privacy Policy California Collection Notice
Do Not Sell My Info
Use of this website constitutes acceptance of our terms of use, our cookies policy, and our privacy policy The Houston Press may earn a portion of sales from products & services purchased through links on our site from our affiliate partners. ©2022 Houston Press, LP. All rights reserved.