Landry’s Signature Group continues its Houston Chef Series, a celebration starring the restaurant group’s award-winning executive chefs this summer. This year's theme is “A Global Culinary Adventure,” and the second to last dinner features a menu inspired by Italian cuisine from chef Jim Krauss at The Palm, 6100 Westheimer.

White Linen Night in the Heights

Tropical bar and lounge Space Cowboy, 100 West Cavalcade, will host a White Linen Night party from 5 to 10 p.m. over at its home at the Heights House Hotel. The party will feature several vendors including OSO Coffee Co., Planet Churro, Space Cowboy Snowcones, Houston artist Mark Deleon and more, and Space Cowboy executive chef Lyle Bento will be roasting a whole kalua pig to go with drink specials at the bar.

Landry’s Signature Group closes out its annual Houston Chef Series with an all-star Grand Finale Dinner at Vic & Anthony's, 1510 Texas. The menu will take a trip around the globe with all Landry’s Inc. Signature Group chefs. Cost is $199 per person.

Dog and BBQ lovers can play with rescue pups and celebrate DOGust at Woodshed Smokehouse, 3728 Wakeforest, every Sunday in August. Chef Tim Love's Levy Park smokehouse is hosting the rescue awareness days with Lola's Lucky Day, a Houston nonprofit that rescues stray dogs in Texas and finds them homes in Wisconsin, Go on site with small groups of rescue dogs from noon to 4 p.m. Woodshed will offer a free appetizer and peanut butter milk-bone with any purchase during the events. 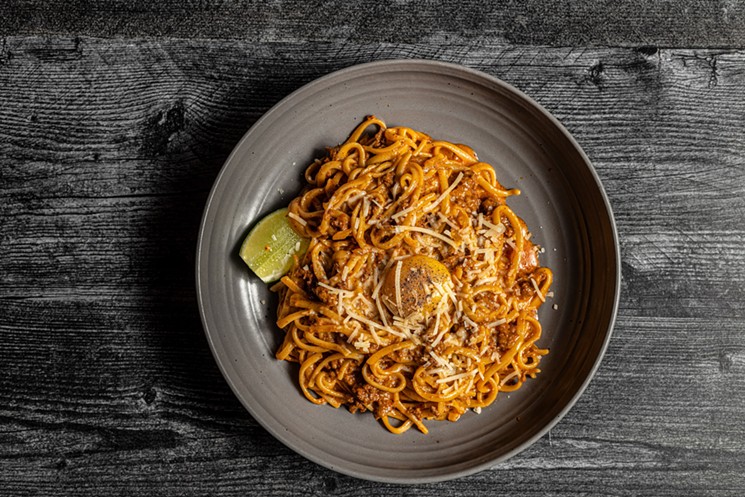 You'll find this decadent chorizo and egg carbonara on the HRW menu at Mastranto's.
Photo by Christa Elyce Studios
All month long

Houston Restaurant Weeks is back, running through Labor Day while supporting restaurants and raising funds for the Houston Food Bank. New to the lineup this year are exciting spots like Fegen’s, Xin Chào, and downtown’s The Nash, alongside neighborhood favorites and HRW classics like Alice Blue, B&B Butchers, Davis St. at Hermann Park, Mastrantos, Rainbow Lodge and more. Peruse the entire library of participating restaurants and their HRW menus to start booking reservations now.

In honor of National Deli Month, Kenny & Ziggy’s New York Delicatessen & Restaurant, 2327 Post Oak, will be offering a multi-choice, three-course menu during lunch and dinner ($38), with 10 percent of each meal sold going to the Holocaust Museum Houston and providing funds for its education programs. The offer is available throughout the month of August.

Enchilada of the Month at Sylvia’s Enchilada Kitchen

Sylvia’s Enchilada Kitchen, 6401 Woodway, 1140 Eldridge Pkwy, continues its six-month “Enchilada of the Month” adventure, which kicked off in July. For August, chef-owner Sylvia Casares has created the Armstrong, a nod to the South Texas ranch and town near her own birthplace in Brownsville. The Armstrong features house corn tortillas filled with traditional carne guisada, topped with gravy, cheddar cheese and onions and served with rice and beans or a Caesar salad $17.50 plus tax and gratuity.

Craft Creamery chef/owner Steve Marques partnered with BOH Pasta & Pizza to create a pizza inspired by his past popular burger from The Burger Guys. Made with ground beef, bread and butter jalapenos, onion bacon jam and pickled mustard seeds, The Burger Guys Houston Burger Pizza is available now at BOH, 409 Travis, and will run a minimum of two weeks. The specialty pizza is part of BOH’s guest chef series where 100 percent of the proceeds from sales of the pizza will go to Ty Grossie, a former long-time employee’s medical expenses as he is fighting cancer. BOH will also be serving Craft Creamery’s spumoni ice cream for its anniversary this month.

Eighteen36, 2221 West Alabama, launched a new craft cocktail menu with a percentage of proceeds going to Special Olympics Texas. The drinks are handcrafted to resemble the five Olympic rings, each one featuring a bright color and unique flavor profile, from the Sazerac and pomegranate-kissed Triple Jump to the Saint James Rhum Blank and Blue Curacao-spiked High Dive.

FM Kitchen & Bar, 1112 Shepherd, 907 Westheimer, will be showing the Olympics on all TVs at both locations and offering a "Lunch of Champions" special featuring a choice of FM Burger, Fried Chicken Sandwich or FM Club; side of fries, tots or side salad; and a Eureka Heights Buckle Bunny for $15.

New York Deli and Coffee, 9720 Hillcroft, will be offering a “Going For The Gold!” breakfast special during the 2021 Tokyo Olympics. Inspired by Simone Biles’ breakfast preferences as told to Women's Health Magazine, the plate features two golden scrambled eggs, cinnamon rolls and a beverage of choice. The children's plate can be purchased for $5.95 and comes with mini-cinnamon rolls; and the adult plate comes with a large cinnamon roll for $6.95.

The Rustic, 1836 Polk, 1121 Uptown Park, will be offering a “Shot for the Gold” ($4) made with Hornitos Plata, pineapple and orange Juice, gold Luster Dust and Tabasco throughout the Olympic Games.

Studewood Cantine, 1111 Studewood Place, will offer a free shot of its house gold tequila, 100 percent agave Agavales, for those in the restaurant when the USA wins gold. There will also be a self-serve nacho bar for $15 Monday-Wednesday during Olympic programming.

Fuzzy’s Taco Shop has added the Hatch Green Chile Taco to its menu for a limited time, featuring shredded spicy pork or shredded chicken with Fuzzy’s signature garlic sauce, avocado slices, feta and cilantro with a made-in-house Hatch green chile sauce on a warm flour tortilla. Guests will be able to enjoy the new taco through Sunday, August 29.

The Return of Omakase at Kata Robata

Omakase is back at Kata Robata, 3600 Kirby. Chef Manabu “Hori” Horiuchi's menu fluctuates based on the types of fish that he sources each day from Japan, but it’s always a mix of cold and hot dishes. There are only eight omakase tastings a night (not available on Sundays or Wednesdays), and the price averages $150-$200.
California Privacy Policy California Collection Notice
Do Not Sell My Info
Use of this website constitutes acceptance of our terms of use, our cookies policy, and our privacy policy The Houston Press may earn a portion of sales from products & services purchased through links on our site from our affiliate partners. ©2021 Houston Press, LP. All rights reserved.