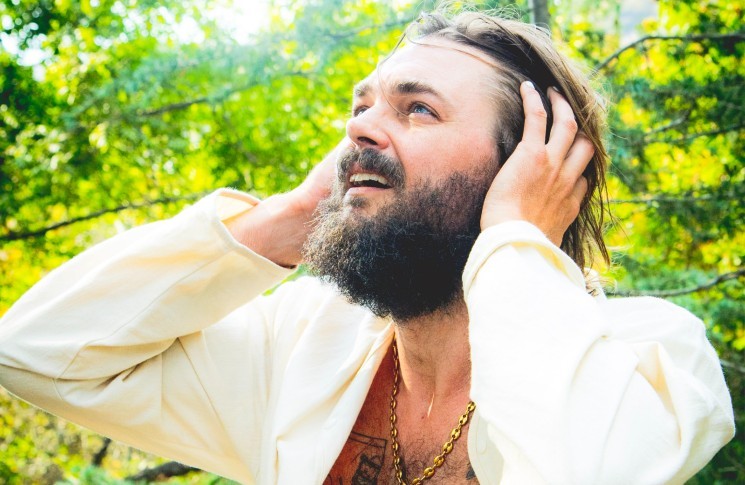 Photo by Greg Feiner, courtesy of UTA
Nick Thune
Nick Thune answered the requisite COVID question with a perfectly Nick Thune joke. Asked about performing stand-up comedy during the pandemic, he mentioned he’d done only a few shows this year ahead of his Velvet Loafers Tour, which began the last week of July with five shows in San Diego. During quarantine, he focused on his other artistic interests, of which there are many, we learned.

“I just decided to worry about the things that I could worry about and doing stand-up wasn’t one of them so I just kind of let it go. And I think that was a good thing,” he said. “Everybody was like, ‘Aren’t you afraid of being rusty?’ It’s like, listen, shit doesn’t rust, okay?’”

That wry, sometimes self-deprecating humor is what fans have come to expect from Thune, who brings the tour to The Secret Group Tuesday, August 17. He took a few moments from a well-earned vacation to chat with the Houston Press about his work as a comedian, actor, filmmaker, musician and novelist.

“Writing during anytime is never a concern for me in the sense that I never sit down and force anything out. I’d never sit down and be like ‘Okay, it’s quarantine, I better do something.’ I’m basically constantly creating,” he shared. “Like right now, I’m editing three videos on my phone that I’ve been making for the last month and I’m writing a novel on the side that I step into every week for a couple of days maybe. I’m writing the novel but as I’m writing, I’m writing stuff that’s not going to make it in the book and jokes come out of me in that form and they also do in the form of making films.


“I’ve learned to less focus on sitting down trying to write jokes and more trying to create art and knowing that jokes are going to come out of that,” he summarized.

It’s a creative process that obviously works for Thune, an artist who has worked steadily since he arrived in California from his home state of Washington. From TV projects like the second season of HBO's Love Life to frequent late night talk show appearances, in films like Knocked Up, Venom and Dave Made a Maze and in stand-up specials for Comedy Central, NBC and Netflix, Thune’s had many irons in the American entertainment fire over the last decade.

He prefers a less fiery analogy, though, one on the other end of the climate spectrum.


“Here’s the thing about it. It’s the snowball that’s going down the mountain, you know? As long as you’ve got something and you start rolling, stuff’s just going to get stuck,” he said and offered an example. “I was flying up to New York to film this little thing on an HBO show and on the plane I got an email from The Tonight Show saying, ‘Hey, you’re going to be in New York, do you want to do The Tonight Show?’

“As long as I just keep rolling down the hill, stuff’s gonna get stuck to me. I’ve stopped being picky,” he said. “I tend to think the things that are going to get stuck to me, that’s an opportunity, and I love opportunities because it gives me a chance to try something new, different, you know? I filmed a movie this year that’s not a kid’s movie but it’s like a teenager movie and I worked with teenage girls for a month and it was fun. It just was a totally different thing for me and I loved it.”

That’s a Netflix project titled Mixtape, a coming of age film Thune believes will hit the streamer during the holiday season. We noticed he does lots of acting work with kids. He’s a one-time summer camp counselor and his affinity for working with young actors comes through on film, particularly in The Right One, a 2021 film now airing on Hulu and streaming on demand.

“It brings the most honest part of yourself out. Kids just see right through bullshit. Authenticity, that’s currency with kids,” Thune said. “When kids see somebody that’s being authentic they watch and they want to know and you feel like you’re actually teaching them something.”

Those lessons apply not only to his work life but his personal life, too. He has a 7-year-old son he’s trying to navigate through an increasingly puzzling world. As he teaches his son, he’s learning even more about being genuine, which is good for the jokes. For instance, he said, his son made an observation during a recent vacation.


“He was like, ‘Your hair’s getting long. You should get it cut or else people might think you’re a woman.’ I laughed and I was like, ‘I don’t care what people think I am.’ And he’s like, ‘You don’t care what people think you are?’ And I said, ‘No. Honestly, whatever they think of me it’s not my business.’ It’s just not. The fact that I’m living rent free in their head is enough for me.

“It’s funny, the things about the quarantine that brought comedy to me is paying more attention to the things my son is doing than I ever would have,” he continued. “For instance, realizing that he’s been using YouTube on his iPad and going into the history thing, I’m like, I wonder what’s going on here? It’s pretty much Minecraft videos except one video, a 30-minute-long video that proves that the Earth is flat.

“It’s like he watched the whole thing, I can see it right there, he watched it ‘til the end,” and we traded laughter as he continued. “My concern there was I don’t even think I’ve mentioned to him yet that the Earth is round. So, this could be the first information that he’s getting about the shape of the Earth. To me, if that’s the first thing you’ve heard, there is nothing more obvious than, of course the Earth is flat. Look around. It’s all flat! Of course, it’s flat.

“And then now I’m looking like some conspiracy theory hippie, like, ‘No man, it’s round! C’mon dude! It’s like gravity and the Earth and it’s rotating, man!’ It’s like, ‘Oh, great, Dad is a round-Earther.’

“Those are the things that I could pull from what was happening around me. That’s, for me, the best inspiration for things that people are going to connect to would come from.”

Thune said he’s performed in Houston a bit so he knows the city a little and, it would seem, the city knows him, too. On his Instagram page there’s a promo video for the Houston show by none other than Houston rapper Fat Tony.

“I know Fat Tony because I just am a fan and reached out once and said, ‘Man, I love what you do, if you’re ever in L.A. I want you to perform on a show with me or something,’” he said, though schedules haven’t allowed that dream team-up yet. “In that way we kind of glommed onto whatever the other was doing. I love finding people like him that I am just so inspired by. He has a song called ‘Jeremy Bixby’ that is one of those songs that I’ve listened to so many times and it’s like telling a story and is exactly what I do in such a different way though, and I love it.”


Thune will be following in Fat Tony’s footsteps soon, in a manner of speaking. He’s recording an album of original music, expanding on the guitar playing he’s done in past comedy routines.

“I’m recording it right now in Lake Arrowhead in two-to-three day chunks at a time,” he said. “I’ve written 50 or 60 songs over the past six years, maybe more than that, but 50 or 60 songs that I can pull up pages where I’ve handwritten them down and there are chords and thoughts. This guy I really like, James Henry, Jr., I was like, here’s all these songs, and I played him some and showed him voice notes and pages and was like, ‘Is this music? Could this be real music?’”

“I’m hoping to have it out right in the new year,” he said of the album. “I’m in no hurry to rush it out but I also want to finish the project, whether somebody else wants to release it for me or it's self-released.”

Look for a common element in those songs, he said. As a songwriter he found that the opening line to any song set the theme for the rest of it. It’s the same approach he’s employed for the novel he’s writing.

“I sat down as an exercise to just start writing a story, without any preparation,” he said. “Every night I tell my son a story before bed and some of them are based on my life but a lot of them are just made up and I like to do that. So, I sat down having zero plan and now I’m probably halfway through the story of an art critic who is sent to Saint Paul, Minnesota to evaluate a 12 year-old’s piece of art that sold for $200,000. It turns into this kind of investigative reporter type thing and it’s been really fun. After I finished the first 20 pages then I could map out the whole story based off what I had just written. It was so random and fun.”

No one would consider an avalanche random or fun. But, Nick Thune is possibly the exception, the fast-moving human snowball who keeps growing with each new project he allows himself to try.

“It’s just a fun thing to keep doing, like writing all those songs. Eventually, something is going to be done.”

Nick Thune visits The Secret Group, 2101 Polk, on Tuesday, August 17. The show is presented in part by House Party Comedy with proceeds benefitting pangolin research. Doors at 7 p.m., $15-$17.
California Privacy Policy California Collection Notice
Do Not Sell My Info
Use of this website constitutes acceptance of our terms of use, our cookies policy, and our privacy policy The Houston Press may earn a portion of sales from products & services purchased through links on our site from our affiliate partners. ©2021 Houston Press, LP. All rights reserved.