The Teens on Reservation Dogs Want Out, But on Their Own (Sometimes Comic) Terms 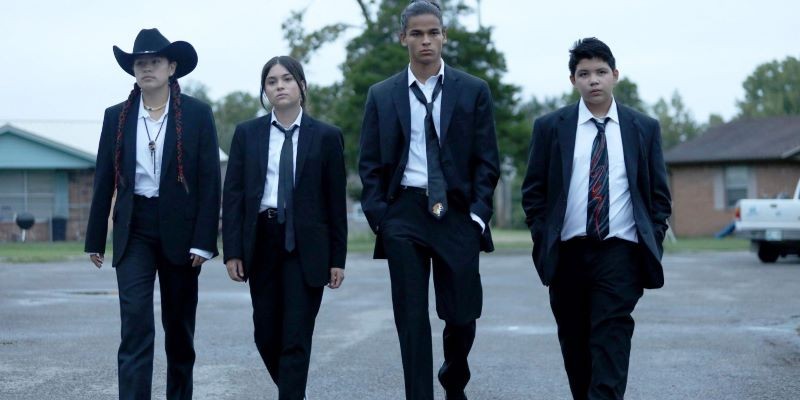 Screenshot
Looking for a way out of Oklahoma, in sometimes hilarious fashion.
Reservation Dogs is Taika Waititi and Sterlin Harjo’s Native American-centered comedy about a group of teens living on a reservation in Oklahoma. Harjo, a native American filmmaker, and Waititi, one of the most in-demand entertainment entities, have created a hilarious and uncompromising, true-to-life series about Native American life.

The Quentin Tarantino-inspired name is appropriate for the bold nature of the show and its mischievous angsty teenage protagonists. It drops its audience in a world that’s fully fleshed out with interesting characters, with some great performances in a setting rarely explored in TV or film.

The FX show is about a group of teens living on a Native reservation in Oklahoma who steal and commit other crimes to save up enough money to move to California. The Reservation Dogs include their self-appointed leader, Bear (D’Pharaoh Woon-A-Tai), Elora Danan (Devery Jacobs), Cheese (Lane Factor), and Willie Jack (Paulina Alexis). The kids are trying to get out of the reservation as fast as possible, trying to avoid succumbing to what they see around them and escaping before it’s too late. Of course, the angst of being a teen is very present, but it’s used to explore what the Native experience is like and some of its problems.

There is a sense of morality and responsibility to the community littered throughout the show’s comedic tendencies and coming-of-age scenarios. Teens wanting to get out of their small hometown to which they are “stuck” is a common trope, but it has never been told like this or about this specific community.

The show is a lot like its FX contemporary Atlanta, one of the best shows of the past decade. Like Atlanta, Reservation Dogs is able to exist in its own world and tell specific stories and get weird with its material. It has an overall narrative, but its episodes aren’t beholden to moving a story along: they can just be individual adventures with their beginning and end and unique stakes. The second episode is basically the group spending a day at the local clinic selling meat pies — in turns funny, heartwarming and emotional.

Officer Big, played by Zahn McClarnon (Westworld), is a hilarious and aloof police officer who never fails to entertain every time he’s on-screen. There’s a meth gang led by a white guy who believes he’s Native American, played by Kirk Fox (Parks and Recreation.. The all-knowing twin rappers are a stream of constant joy whenever they appear. Mose and Mekko serve as a community gossip hub on bicycles that give the group the name Reservation Dogs.

The funniest recurring character has to be the Warrior Spirit (Dallas Goldtooth) who tries to give Bear advice and steer him in the right direction, but all he succeeds in doing is talking about how he once saw General Custer and how he fell off his horse and died right before the Battle of Wounded Knee. The Warrior Spirit might be a clown, but he gives some good advice when he can get around to sharing it. The show isn’t shy about exploring spirituality and isn't afraid to have fun with Native culture.

Uncompromising in its depiction of Native American beliefs and life, Reservation Dogs doesn’t aim to make its audience comfortable by watering down some of its harsher elements. This show is a real surprise and is deserving of the high praise it’s been given.

Reservation Dogs is available to watch every Monday on FX and stream on FX on Hulu.