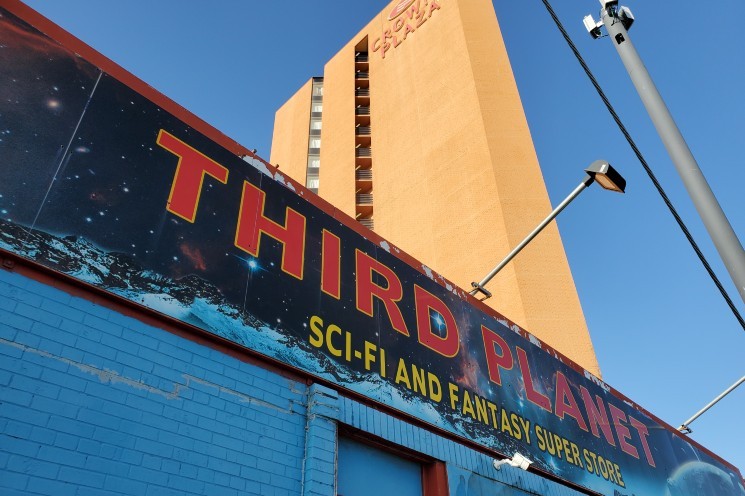 Third Planet is like an underdog superhero its dedicated patrons might stumble onto while digging through its vast comic book collection. From the beginning, 46 years ago this month, the Kirby District retailer of comics and collectibles has had to fight its way past archenemies, namely a society that wasn’t quite ready to accept geek culture and the city’s unpredictable boom or bust economy.

As the state’s oldest privately-owned comic book shop, Third Planet hasn’t stayed in business because of make-believe superpowers. It’s in tune with what its “Planeteers” crave, whether it’s the latest issue of a comic or a vintage copy from decades ago. The shop’s commitment to collectibles is storied, with an accumulation of models, toys, trading cards, T-shirts, movies, posters, role playing games and action figures that’s the envy of E-bay surfers everywhere. On a recent visit, we overheard two of the shop’s knowledgeable, friendly staffers discussing the collectible value of a Ruth Bader Ginsburg action figure (yes, it’s real and spectacular). From RBG to RPGs, Third Planet has its finger on the pulse of the latest comic shop trends.

Adding to its lore as underdog superhero, Third Planet even has its own Lex Luthor-like nemesis in  neighboring Crowne Plaza River Oaks Hotel. A widely reported row between the shop and the looming hotel took on mythic battle status when Third Planet filed suit — in viral comic book fashion — against the hotel’s corporate ownership this year. It alleges damages to the store, including roof damage from fire extinguishers and other items being dropped onto it, by unruly, unchecked guests of the hotel. That battle aside, in Houston’s CBU (ahem, “Comic Book Universe”), Third Planet’s blue cape waves bravely for those who turn to it for help.