Photo by Lorretta Ruggiero
Maria Rita's provides a feast for a good price.
School is back in session and so is the chaos that surrounds the back-to-school frenzy. Throw in a dose of pandemic craziness and it's a wonder we haven't all lost our minds. For my family, it is my son's senior year of high school and my daughter's senior year at the University of Houston. We spent last weekend moving her into her campus apartment amid a downpour that quickly flooded the streets around Calhoun and University Boulevard while drenching families pushing blue carts filled with bedding, toilet paper and enough snacks to get students through the semester. 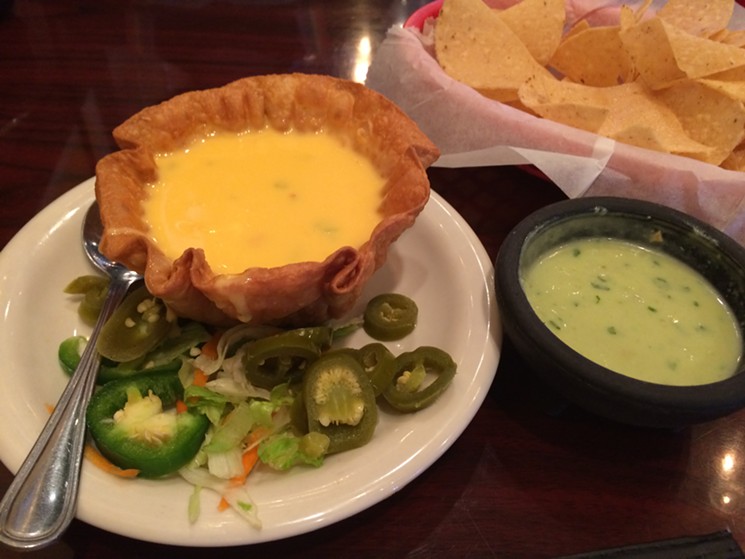 "You can even eat the dishes."
Photo by Lorretta Ruggiero
After moving furniture around and filling our daughter's small kitchen with utensils and non-perishables, we were hungry for linner, the lunch/dinner meal that our family usually has when we dine out. My husband, Classic Rock Bob, was thirsty for a margarita so we decided on Tex-Mex which is our usual default family dine-out because it pleases everyone. We looked online for nearby restaurants but I suggested we try Maria Rita's Tex-Mex off the Gulf Freeway. I had written about it previously when it opened a couple of years ago but I had never had the opportunity to try it. I have driven past it on the way to Galveston numerous times, never noticing it from the freeway. It was 17 minutes away from UH, according to Google Maps, so that seemed doable. 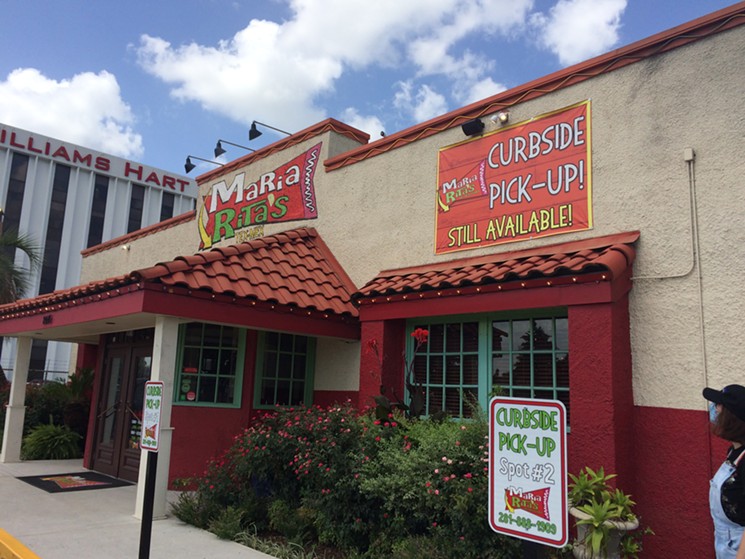 A little oasis along the Gulf Freeway.
Photo by Lorretta Ruggiero
Once we hit the road, the skies opened again making the drive down Interstate 45 rather arduous. We made a U-turn under the freeway and then arrived at our destination. The building has the attractive look of a Mexican cottage with flowers and plants all around. It looked out of place among the blight of the Gulf Freeway's various businesses.

The interior was just as cute with Western and Spanish movie posters lining the brightly colored walls. There was a hand sanitizing dispenser in the entryway which we each took advantage of. We were seated at a booth with clear dividers between ourselves and other diners. Our masked server came to take our order, speaking to us in Spanish. We answered in English because our Spanish is limited but that didn't seem to matter. Spanglish it was to be, with us relying on our daughter's much better grasp of the language. 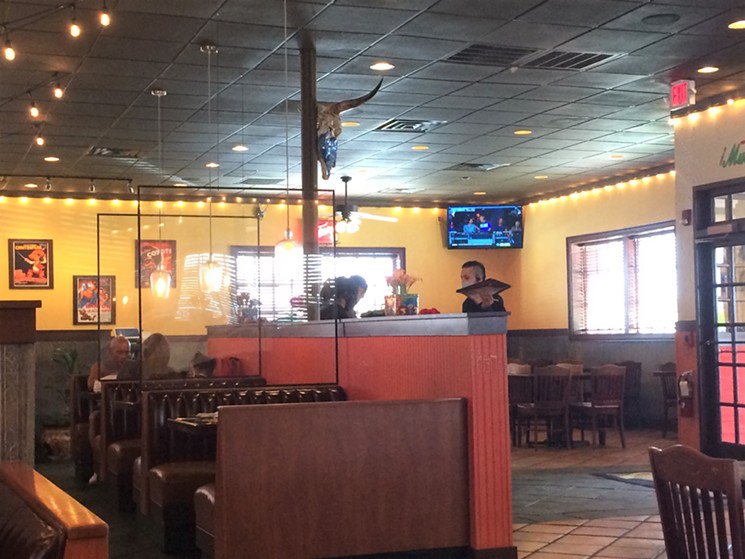 The interior is bright and clean.
Photo by Lorretta Ruggiero
It was happy hour so we asked about the difference between the $5 Maria Rita and the $3 house margarita. The only difference seemed to be an extra shot of tequila so we opted for the house rita. Our daughter, a newly-minted 21-year-old, ordered a strawberry swirl margarita. The teenage boy had to be content with lemonade, much to his chagrin. We added a happy hour Queso Clasico to our order, then perused our menus.

Another server came by to double check that our order was correct and soon our original server returned with our drinks and queso. The house margaritas were served in mugs and were a bit on the lime-y side. My daughter loved her strawberry swirl version and the freshness and sweetness of the strawberry puree helped to cut through the tart lime. The queso was served in a fried flour tortilla bowl and was nice and thick. There were jalapenos, both fresh and pickled, on the side. The large portion size and the quality were very good for a $5.68 price tag. For the happy hour price of $2.84, it was a steal. 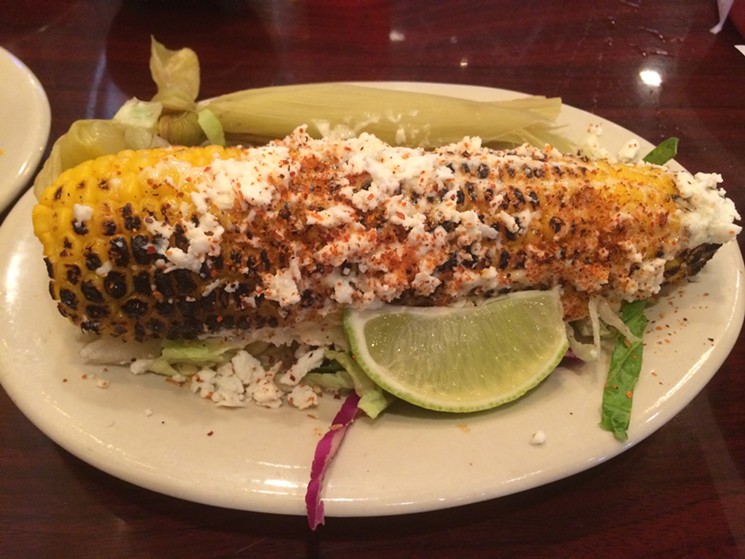 The prettiest elote in Houston.
Photo by Lorretta Ruggiero
The chips themselves were thin and crispy and there were two salsas accompanying them. Classic Rock Bob preferred the red sauce which was slightly smoky but still retained the flavor of a fresh salsa. The green sauce was tomatillo-forward and I liked it a lot, as did my daughter. The teenage boy just mindlessly shoveled chips in his gullet which he does at home as well.

We placed our dinner orders and the food came out quickly. My daughter loves elote and the version at Maria Rita's is a thing of roasted beauty. No mini cobs here. This was a large roasted cob of corn with its husk tied together, topped with a little mayo, queso fresco and Mexican spices. My daughter went at it like a hungry little mouse. She and I ordered beef fajitas for one to split and it was enough for the both of us, though it only arrived with two tortillas. Usually, most restaurants give at least three per order. However, the tortillas are homemade and amazingly good at Maria Rita's so maybe the restaurant is a little less free with them. We asked for another order and again received two. 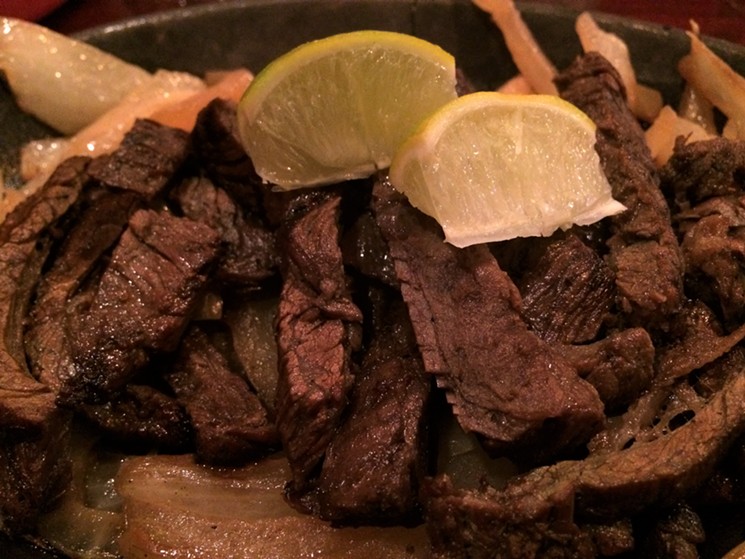 Even with the meat crisis, Maria Rita's delivers quality beef.
Photo by Lorretta Ruggiero
Our beef fajitas were delicious and reminded me of early days when I worked in a restaurant that marinated its skirt steak in sherry wine. My son's Tex-Mex Burger ($11.49) looked fabulous as well. It was a large portion of beef fajita meat, topped with some bacon and loads of melted Monterrey Jack cheese on a toasted bun that was slightly sweet. I tasted a bite of my son's burger and the beef was extremely tender and flavorful. The cheese was too much for me but to a teenage boy, it was heaven. The burger came with a side of battered fries that were pedestrian but fine. It was also served with a little pico de gallo and a scoop of guacamole which can be added to the burger or enjoyed with the chips. And it's pretty tasty guacamole. I normally avoid restaurant guac because it usually has a chemical aftertaste but Maria Rita's does not. It is tinged with a spice that was unrecognizable to me, maybe toasted cumin. Whatever it was, it gave the guacamole a unique flavor. Burger meets fajitas and it's a wonderful thing.
Photo by Lorretta Ruggiero
The charro beans were creamier than most that I have eaten elsewhere. My daughter especially loved the chunks of bacon throughout. She also appreciated the fact that it was not filled with onions, a texture issue for her with that particular allium. That meant that I had the grilled onions on the fajita plate all to myself.

We were all very happy with our selections except for Classic Rock Bob. He ordered the Burrito with shredded chicken and thought it was rather dry and flavorless. It was covered in melted cheese and queso, a bit of overkill, particularly since we had queso for an appetizer. What he hadn't realized was that the burrito could be ordered with a choice of different sauces like gravy or poblano cream sauce. I think one of those would have saved it for him. The decor at Maria Rita's is fun.
Photo by Lorretta Ruggiero
Too bad, so sad for CRB but the rest of us couldn't stop complimenting our dishes. I ordered a sangria swirl margarita because the house margarita had been too heavy on the sweet and sour mix, even for someone who has a fondness for sucking fresh limes with salt. The mix of sangria helped to give it more balance.

We left with a small to-go box with just enough fajita meat, onions and rice for a one-person meal the next day. I made sure that one person was me. 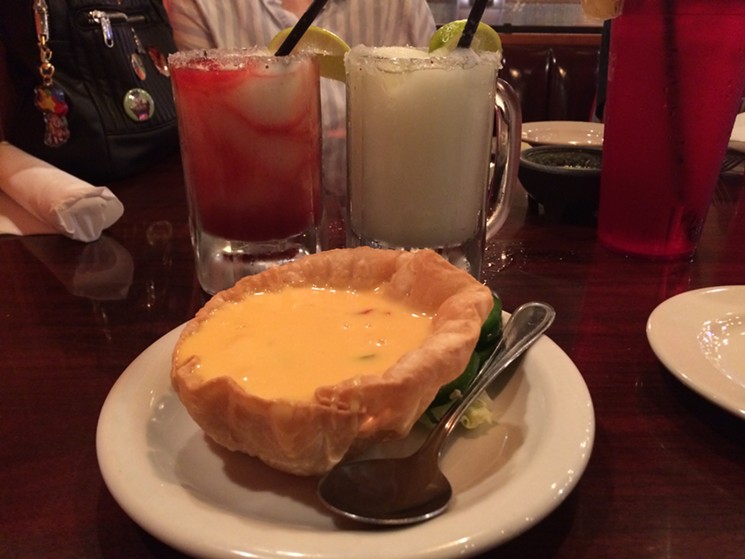 Queso and ritas twice in one week is a treat.
Photo by Lorretta Ruggiero
A few days later, I was back at UH to take my daughter shopping for essentials. It was late afternoon and we were both hungry. Those beef fajitas were on my mind. I don't normally eat Tex-Mex two times in one week but the proximity of Maria Rita's to where we were was just too tempting.

It was still lunch time when we arrived. My daughter couldn't resist ordering the elote ($3.75) again and this time, it was an even bigger beast. We split the lunch beef fajitas (($10.98), an order of chicharrones ($3) and I asked for an a la carte pork tamale with chili gravy, though I was tempted to try the tomatillo sauce instead.

My daughter, a creature of habit, stayed with her strawberry margarita but I opted for the Maria Rita to see if it would be a little better than the house rita. It was a good call. The Maria Rita was stronger and the sweetness from the DeKuyper orange liqueur helped to tame the sweet and sour base. These babies snap, crackle and pop.
Photo by Lorretta Ruggiero
Our fajitas were again delicious. The pork tamale was fine but I was hoping the chili gravy would be a bit spicier. Maybe my taste buds have been affected by years of Tex-Mex and Cajun food. The chicharrones took a few extra minutes we were told because they were still being fried. They arrived at the table with the Valentina sauce on the side, which was a better idea than the drizzle promised on the menu. They would occasionally crackle while we were dining, living up to their name. We ended up taking them home to snack on, later. For $3, we wished we had ordered an extra serving. Mangonada-it's what's for dessert.
Photo by Lorretta Ruggiero
Though I was getting rather full, I ordered a mango margarita. The server read my mind. "Do you want it with Tajin on the rim? " she asked. I clapped my hands with delight and replied in the affirmative. It arrived in its sunset-colored glory and was a perfect dessert for me. The restaurant does have several sweets like sopapillas and churros plus an ice cream machine with free soft serve cones for those who don't end their meals with margaritas. Tortilla soup rides home unscathed.
Photo by Lorretta Ruggiero
I ordered a bowl of tortilla soup to go and was surprised with a large container of soup, a side of tortilla strips, and some chips and salsa as well. The soup had huge chunks of chicken and also rice and corn. Avocado is extra but I had some at home already. For $7.24, I was bringing a feast home to CRB.

Maria Rita's is truly an enjoyable and delicious dining experience as well as being a great value for the quality of food and service. Our family has four or five different Mexican restaurants in our rotation and we always wish we could choose our favorite items from each to make the perfect Tex-Mex destination. Maria Rita's comes pretty close to being that one.

Lunch specials: Monday through Friday, 11 a.m. to 4 p.m.
Happy Hour: Monday through Friday, 2 p.m. to 6 p.m.
California Privacy Policy California Collection Notice
Do Not Sell My Info
Use of this website constitutes acceptance of our terms of use, our cookies policy, and our privacy policy The Houston Press may earn a portion of sales from products & services purchased through links on our site from our affiliate partners. ©2022 Houston Press, LP. All rights reserved.