The bill previously passed through committee earlier this week on Tuesday, and House Republicans seemed intent during the bill’s debate Thursday to speed the process along as much as possible. Democrats attempted to do the opposite, by offering multiple amendments and asking long-winded questions seemingly intent on delaying the passage of a bill they knew would ultimately pass.

And pass it did, just after 11 p.m. after debate on more than 60 amendments and along a mostly party-line vote; state Rep. Lyle Larson (R-San Antonio), who voted against the bill, has said his fellow Republicans’ election legislation is based on “a lot of political BS,” primarily former President Donald Trump’s repeated, refuted insistence that voter fraud cost him the 2020 election.

There will be one more largely ceremonial House vote on the bill Friday, but given Thursday’s successful House vote, it’s all but certain the bill will eventually reach the desk of Gov. Greg Abbott, months after Democrats’ first walkout effort killed the initial version of the bill back in May during the regular session.

State Rep. Andrew Murr (R-Kerrville), the new House bill’s author, said at the outset of Thursday’s hearing “I do not believe that this bill suppresses votes,” and insisted it instead was designed to create “uniformity” across the state’s election laws.

But his bill as passed still included provisions Democrats argued will indeed suppress the votes of Texans, particularly Black and Hispanic Texans who took advantage of Harris County’s one day of 24-hour early voting and drive-thru voting during 2020, two voting methods the House bill bans outright. The bill also creates additional hurdles to voting by mail, and Democrats believe the final version still allows too much power to partisan poll watchers.

Early during the bill’s debate, House Speaker Dade Phelan (R-Beaumont) asked members to keep things civil during what he clearly expected to be a contentious day of debate. He then specifically made it known that he “would appreciate members not using the word ‘racism’ this afternoon,” a notable ask considering Democrats have called the bill “Jim Crow 2.0” due to the ways they allege it will make voting more difficult for voters of color.

But later that afternoon, while debating a Democratic amendment to the bill put forth by state Rep. Rafael Anchía (D-Dallas), his colleague Gina Hinojosa (D-Austin) did just that in a question about past federal court rulings referenced by Anchía in which the Texas Legislature was found to have passed laws that intentionally discriminated against minorities.

“Intentional discrimination against people of a certain race: is that racism?” Hinojosa asked, prompting more than a few gasps from her fellow representatives. After Anchía said he thought that was a fair interpretation, Phelan banged his gavel. 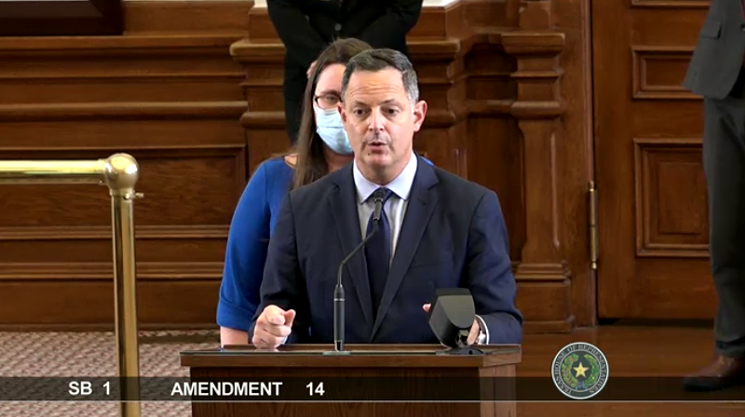 State Rep. Rafael Anchía (D-Dallas) outlined Texas' history of discriminatory election laws on the House floor Thursday.
Screenshot
Anchía argued the Democrats’ case against the bill: “I am convinced that because our elections were safe, secure and successful, that are not here really to deal with what I might term the pretext of the policy goals of incidents of fraud, or likelihood of fraud,”

"We know that the likelihood of fraud in a Texas election is a rounding error of a rounding error — maybe even of another rounding error. It is so infinitesimal so as to be a lower percentage than even being struck by lighting. Yet the governor declared it an emergency item.” — State Rep. Rafael Anchia (D-Dallas)

Ahead of Thursday’s floor debate, Murr pre-filed an amendment to his legislation Wednesday night, which he told House members “contains several of the changes I have discussed with many of you.” His amendment was ultimately approved.

Murr’s amendment adjusted the bill to increase the penalty for an election judge who refuses to allow a poll watcher to be present at a polling place “intentionally or knowingly” up to a Class A misdemeanor, which could come with a one year jail sentence.

Murr’s amendment also added language requiring election officials to notify folks who cast ballots by mail with inaccurate identifying information about their mistakes and notify them of how to correct them to ensure those votes are counted, as long as there is still enough time for that voter to submit another mailed-in ballot.

It also allows — but doesn’t require — those officials to inform voters who made similar efforts if there isn’t enough time for them to cast another mail-in ballot, and requires county voting officials to allow voters to correct that identifying info (typically the last four digits of someone’s social security number or a driver’s license number) through an online form.

While Murr’s amendment softened some of the penalties and provisions Democrats have taken issue with, the bulk of the measures so opposed by House Democrats that led to two straight quorum-breaking walkouts are still included in the bill.

Those include banning 24-hour voting and drive-thru voting (new voting options introduced during the pandemic by Harris County and used mostly by Black and Hispanic voters), adding stiffer penalties for people who make mistakes when assisting disabled voters fill out absentee ballot applications, and several provisions granting poll watchers more freedom to move throughout polling places which critics claim could lead minority voters to be harassed by overeager conservative volunteers.

Radical right-winger state Rep. Bryan Slaton (R-Greenville) tried to introduce an amendment that would have authorized an full-on audit of the 2020 election in Texas, but before he could even read it out loud on the House floor, Texas House Democratic Caucus Chair Chris Turner (D-Grand Prairie) blocked it from being considered through a procedural tactic called a point of order (Slaton ultimately withdrew the amendment once it was clear it was doomed).

In a rare but mostly symbolic win for state Rep. John Bucy (D-Cedar Park), his amendment adding language that ensures disabled voters won’t be denied “reasonable accommodations” for voting was approved. It was one of the only Democratic amendments accepted, as Republicans were in lock-step to avoid allowing substantive changes to the bill.

Later in the evening, another successful amendment from state Rep. Jacey Jetton (R-Sugar Land) brought the House bill more in line with the version Lt. Gov. Dan Patrick’s Senate passed earlier this month. Jetton's amendment added Senate-written provisions for video monitoring of vote counting in large counties and periodic checks of the state's voter rolls to suss-out potential undocumented immigrants. If the Senate thinks the House’s election bill is close enough to the version it passed, it could vote simply to approve the House version and send it immediately to Abbott.

But even given Jetton’s amendment, another round of backroom conference committee negotiations on this latest version of the election bill is likely. That’s the same secretive process that saw controversial measures added to the regular session version of the GOP election bill that would push back Sunday early voting hours far enough to effectively end popular “Souls to the Polls” voting drives by Black churches after their Sunday services, and that gave judges the power to overturn an election even if there wasn’t proof fraudulent votes made a difference in its outcome.

Both were removed from the version of the bill put forth during both special sessions, and neither House nor Senate Republicans have claimed responsibility for who tried to add those measures in the first place.
California Privacy Policy California Collection Notice
Do Not Sell My Info
Use of this website constitutes acceptance of our terms of use, our cookies policy, and our privacy policy The Houston Press may earn a portion of sales from products & services purchased through links on our site from our affiliate partners. ©2022 Houston Press, LP. All rights reserved.