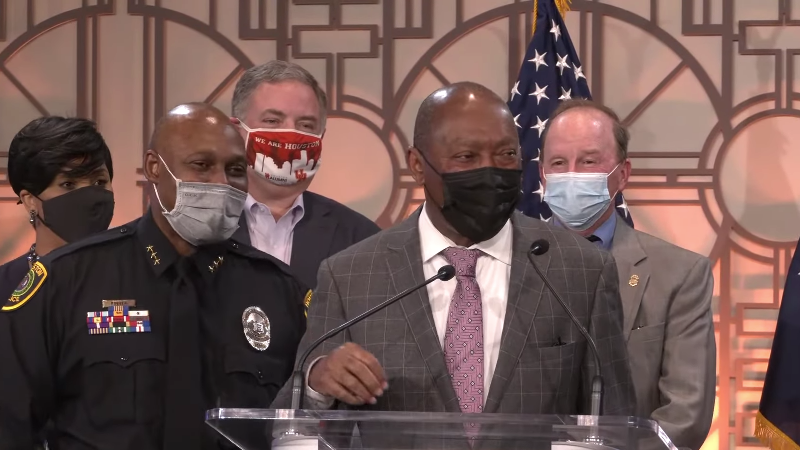 When answering a question about tracking vaccinations among HPD employees, Mary Benton, Turner’s Director of Communications, told the Press in a statement Thursday that “Neither the Houston Police nor Houston Fire Department tracks the number of their employees who are vaccinated. Anecdotally, it is believed to be at or below 50 percent.”

“For health and safety reasons, Mayor Turner has not ruled out a vaccine mandate for all city employees,” she continued.


“Neither the Houston Police nor Houston Fire Department tracks the number of their employees who are vaccinated. Anecdotally, it is believed to be at or below 50 percent. For health and safety reasons, Mayor Turner has not ruled out a vaccine mandate for all city employees.” Mary Benton, Communications Director for Houston Mayor Sylvester Turner

“As the Delta variant spreads through our community and overwhelms local hospitals, Mayor Turner strongly encourages all city of Houston employees to get vaccinated against COVID-19. The mayor requires all employees to wear face masks at work, especially where they cannot socially distance,” Benton said.

Benton’s confirmation that Turner is still open to a city employee vaccine mandate comes just over a week after Turner hinted during a City Council meeting that he was considering issuing such an order. “I’ve got city employees, for example, who haven’t gotten vaccinated. I will tell you, in short order they will.” Turner said August 25.

“People are encouraged to get it. However, that’s where it ends. You don’t have to report it, nobody’s asking,” she said.

“People are encouraged to get it. However, that’s where it ends. You don’t have to report it, nobody’s asking.” - Jodi Silva, Houston Police Department Public Information Officer

“Unfortunately, we have no reliable way of tracking vaccination rates among our employees,” Spencer told the Press in a statement. “We have hosted several employee vaccination events throughout the agency, and we have conducted internal educational campaigns to encourage vaccination.”

Multiple representatives from Harris County Judge Lina Hidalgo's office did not respond to repeated requests for comment from the Press on HCSO’s policy not to track employee vaccinations.

Many Houstonians and Harris County residents may be surprised that their local law enforcement agencies aren’t keeping an official tally of how many of their employees have received a COVID-19 vaccine, especially given that many of those workers are rank-and-file officers interacting with potentially vulnerable members of the public on a daily basis.

But if the anecdotal HPD vaccination rate of 50 percent or less quoted by Benton is accurate, Houston would join the ranks of other major American cities where any given adult resident is more likely to be protected by a COVID-19 vaccination than the police officers working in those communities.

According to The Guardian, the Los Angeles Police Department reported that as of June 8, 51.8 percent of its employees were either fully or partially vaccinated, compared to the 65 percent of eligible Los Angeles residents (those 12 and older) who’d taken at least one coronavirus vaccine dose at the time.

Gov. Greg Abbott has vocally opposed vaccine mandates from government agencies, and has issued multiple executive orders forbidding them. Just hours after Turner made his comment about vaccines during the August 25 City Council meeting, Abbott issued a new executive order that stated “No governmental entity can compel any individual to receive a COVID-19 vaccine.” That order made sure to explicitly say it covered all coronavirus vaccines “regardless of regulatory status.”

It’s an important distinction given that Pfizer’s vaccine has received full approval from the U.S. Food and Drug Administration. A previous Abbott order only forbade government bodies from mandating vaccines under emergency-use authorization. He issued his most recent order just days after the Pfizer vaccine was fully approved by the FDA in an obvious attempt to close what some viewed as a potential loophole for fully approved vaccines.

Even given Abbott’s latest order, Turner is clearly still weighing whether or not to challenge the governor and mandate vaccinations for city employees. Turner has already flouted another executive order of Abbott’s that forbids government mask requirements by issuing a mask mandate for city employees in early August.

Turner and the city haven’t faced retaliation or a legal challenge from the state over that particular issue — so far.
California Privacy Policy California Collection Notice
Do Not Sell My Info
Use of this website constitutes acceptance of our terms of use, our cookies policy, and our privacy policy The Houston Press may earn a portion of sales from products & services purchased through links on our site from our affiliate partners. ©2022 Houston Press, LP. All rights reserved.