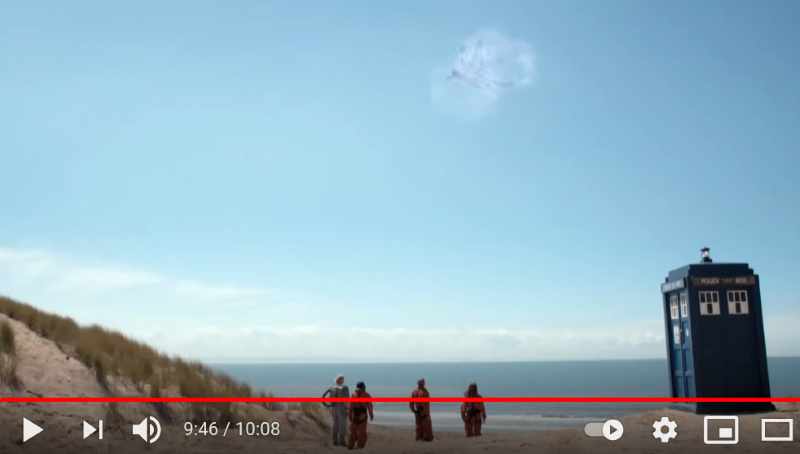 Screenshot from "Kill the Moon".
I know what you're going to say, but hear me out...
I don’t want to write a post-mortem on Doctor Who showrunner Chris Chibnall’s time just yet. We have one (short) season left and a trio of specials after that. However, the Chibnall era has been plagued by one sin that I deeply hope the next person on the helm doesn’t commit: too much normalcy.

“What?!” screams the toxic fanboys so loud it disturbs other people listening to their Joe Rogan podcasts. “Normalcy?! These past two seasons of Doctor Who have been a radical departure into social justice madness!” Calm down, squire.

Twists in Doctor Who come in two flavors: lore dependent and lore independent. An example of a lore dependent twist is “The Genesis Ark is full of Daleks” or “Missy is The Master.” They’re shocks that only work within the context of greater fandom.

There’s nothing wrong with a lore dependent twist. Most long-running television shows have them. However, they can be kind of a crutch used to limp past original ideas. For all that I love Jodie Whittaker as the Thirteenth Doctor and thought a woman taking over the role was long overdue, it’s a very lore dependent move. The idea of a woman time traveler in a show about time traveling is not shocking to anyone else.


Nor has a lot of the “social justice warrior” aspects really done more than jump scare audiences with their ideas. Gays and trans people in the future? Not controversial except in the context of this show’s history. Corporate greed and government police states? That’s just Tuesday.

On top of all this was the overreliance on lore dependent twists in Series 12. First The Master returned, then we got another hidden incarnation of The Doctor, then Frankenstein was inspired by the Cybermen (an idea so on the nose I’m certain it’s been shot down before), then we’re back on Gallifrey, then there’s this weird move to canonize the Morbius Doctors, then the Time Lords are Cybermen, and on, and on. It often read like fan fiction.

Doctor Who works best when it has lore independent shocks at least as often as the lore dependent ones. A great Doctor Who adventure should be something you can drop a new viewer into and they’ll grasp it almost immediately. There’s a reason “Blink” is recommended by so many fans as a jumping off point. You don’t need to know anything about Doctor Who except that it involves time travel in a blue police box to get started.

And, a really great Doctor Who episode should also sound like a crazy person thought it up. Again, “Blink,” is a deeply silly adventure when described: stone angels are secretly time-eating monsters that freeze when you look at them and The Doctor has to beat them using Easter Eggs in DVDs. The whole point of science fiction is that it gets to be batshit insane.

That why I was initially so excited about Chibnall. He wrote “Dinosaurs on a Spaceship,” which lives up admirably to its title and throws an English beach in the middle of a spaceship and Nefertiti on for good measure. I’m not going to go so far and say “Kill the Moon” and it’s whole “the moon is an egg” thing is secretly a good episode, but it is at least an interesting one. People still argue about it today. Think about “Gridlock,” where an entire civilization is based around waiting in traffic, or “The Empty Child” with its space-faring con man and lonely boy gasmask zombies. Those are Ideas with a capital I.

The Chibnall era has taken so few chances like that. Monsters have been very generic, and threats are often so morally unnuanced that hardly anyone could argue against stopping them. Bright spots like “It Takes You Away” where an omni-dimensional god in frog form rules a mirror world on the other side of a labyrinth where knife moths eat you if you don’t have a balloon are few and far between.

I get the impression that Chibnall felt that casting Whittaker was such a stretch that he dared not go much further. Sometimes this worked well. Series 11 and its working-class attitude and smaller stories was a perfectly serviceable season with a few bright spots, but it was also for the most part incredibly safe for science fiction. The season opened with “The Woman Who Fell to Earth,” and in a way Thirteen kind of stayed on the ground too much.

Look, lore dependent episodes can be marvelous. “Let’s Kill Hitler,” “Day of The Doctor,” The End of the World,” and “A Good Man Goes to War” are all examples of lore dependent masterpieces. Those stories are needed. However, the next phase of Doctor Who is really going to need to weirdness like robots who want to use the brain of Madame de Pompadour to repair their spaceship or minotaur in a prison shaped like a hotel that shows people their worst fears. Lore independent ideas add to the show instead of just remixing it.

For all that people pretended that Chibnall radicalized Doctor Who, in reality he played things far too timidly. He rarely did something truly out there, and in the last season he regressed to messing with the canon to shock audiences. The result was a tail-swallowing mediocrity that rarely dared the unknown. The comparative realism of Series 11 was a nice palate cleanser, but it’s time to really see something weird again.
California Privacy Policy California Collection Notice
Do Not Sell My Info
Use of this website constitutes acceptance of our terms of use, our cookies policy, and our privacy policy The Houston Press may earn a portion of sales from products & services purchased through links on our site from our affiliate partners. ©2021 Houston Press, LP. All rights reserved.