How Do the Houston Texans Get To Seven Wins? 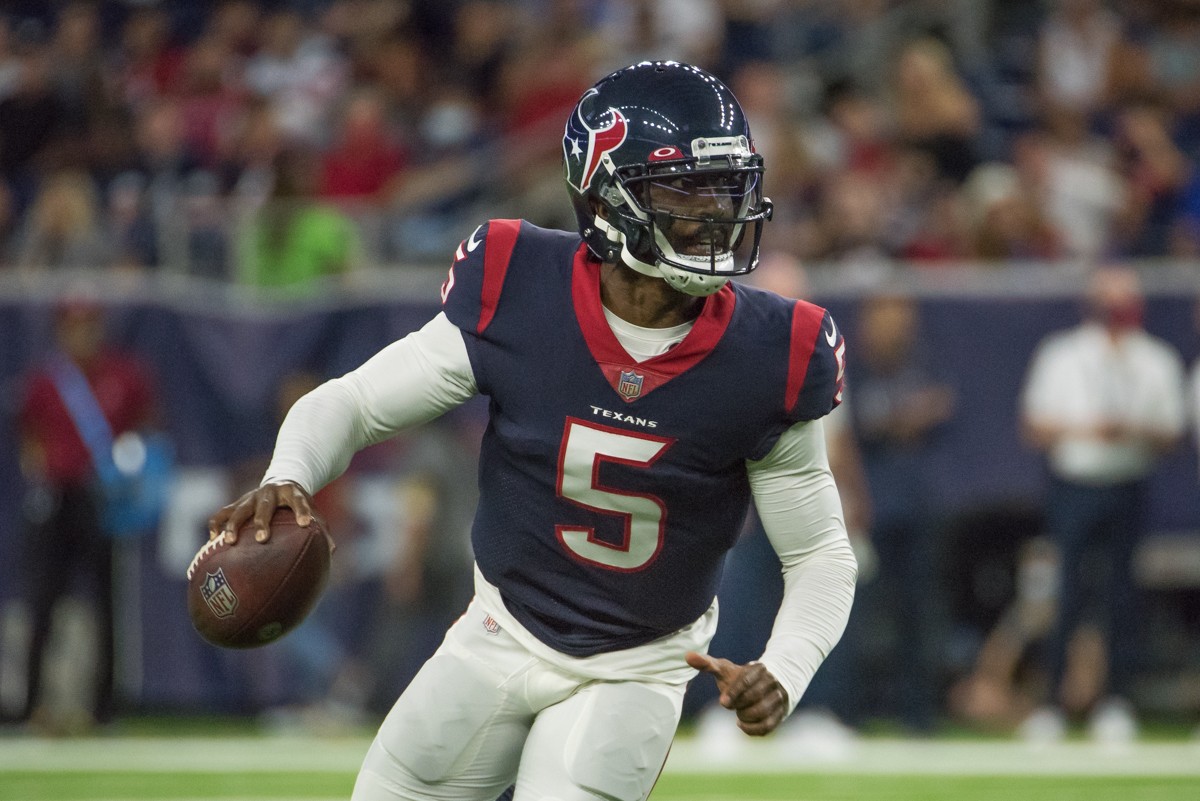 Photo by Jack Gorman
If the Texans are going to exceed expectations in 2021, they will need Tyrod Taylor healthy for 17 games.
Here in Houston, we can wring our hands over the Deshaun Watson situation all we want to, and go about in pity for ourselves, knowing that with Watson's career here likely over, the ceiling for the Texans is somewhere around "pleasantly mediocre." The truth of the matter is that this wasn't going to be a good team even WITH Watson.

That said, what exactly is the floor and the ceiling for the 2021 Houston Texans? Well, ESPN.com recently ran simulations of the 2021 season — 20,000 of them, to be exact — for each of the 32 NFL teams. They took the middle 90 percent of those 20,000 simulations (eliminating the major outliers), and established the "floor" and the "ceiling" for all 32 teams.

Here is what they came up with for the Texans:

Biggest variable: Does new coach David Culley have the ability to turn this team — which is expected more to have a top-five pick in the draft than make the playoffs — into a group that rallies together and is able to rebound from a four-win season? It will be a tough task for the Texans to get to seven wins, especially without QB Deshaun Watson, and much will depend on whether this new roster built with a mindset of rebuilding the culture can actually work right away. — Sarah Barshop

OK, initial thoughts. First, that ceiling seems high, and I'm not saying that to be a jerk. The ceiling is three wins, and yet this is a team I could easily see going 1-16 or 2-15. To be clear, I've already bet that they will win more than 4.5 games, so I'm not a staunch curmudgeon when it comes to assessing the Texans, but I can read a roster. They have almost no high end talent.

Second, of the two scenarios, I think the floor is more likely than the ceiling. (For the record, I have them winning five games this season.) Winning seven games is going to require, without any exception, these four things to happen:

Tyrod Taylor must stay healthy and start the whole season
I'm assuming Deshaun Watson is not playing for the Texans this season. Also, rookie Davis Mills is not even remotely close to being ready to start an NFL regular season game. That puts it all on Taylor, who should protect the ball well enough to give the Texans a chance in more games than the experts think. Taylor has to play all season. If Mills gets inserted as a starter, the season goes down the tubes.

They need to have a top five special teams unit
Field position and kicking game will be key for this Texans team, so reprising the form on special teams that they had in 2018 and 2019, when they were one of the top units in football, according to Football Outsiders' DVOA metric, is essential.

Now, what is the exact road map to seven wins? Here is the Texans entire schedule, including the betting lines for each of the games. The Texans, as you will see, are underdogs in all 17 games, as of right now:

MUST WINS: vs JAC, vs CAR, vs NYJ, at JAC
These games are non-negotiable. They HAVE to win these four games, if they're getting to seven wins — sweeping Jacksonville, beating the Panthers at home on a short week, and beating the Jets who are the smallest favorite on the schedule, a one point favorite at NRG Stadium.

MOST LIKELY REMAINING PATH: I think the most likely path to other three wins would be to flummox a rookie QB in Week 5 (Mac Jones, New England Patriots, at home), steal another home game with a moderate spread (like the Colts -7 in Week 13, or the Chargers -6 in Week 17), and then hope that the Titans are resting their starters in Week 18, gearing up for play-off run.