Apollo Chamber Players Opens Season 'With Malice Toward None' 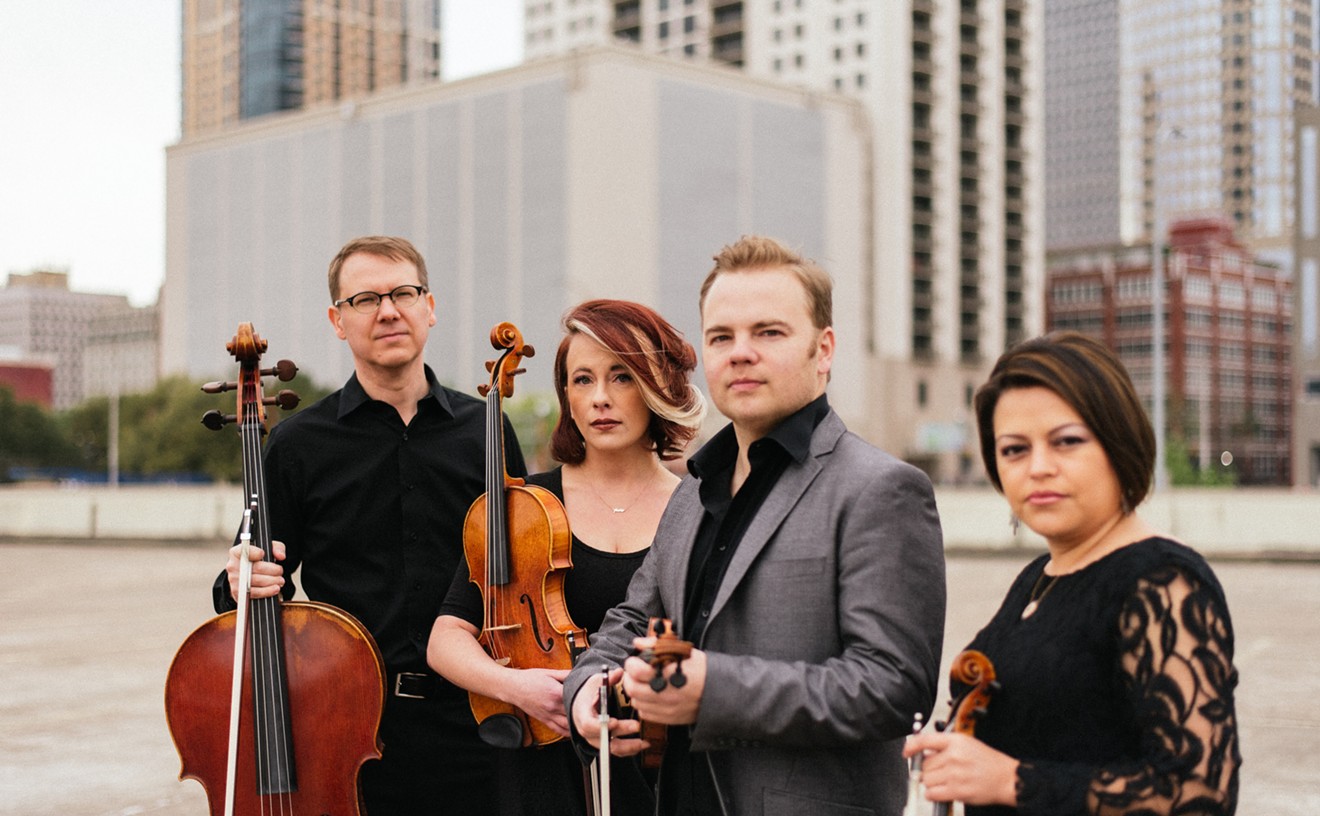 Photo by Katy Cartland
The four-person string quartet Apollo Chamber Players has big plans for its 14th season, including the opening concert, With Malice Toward None.
Some things just naturally go together. Peanut butter and jelly. Coffee and cream. For Apollo Chamber Players, that magical pairing is Ludwig van Beethoven and Abraham Lincoln. The group will present With Malice Toward None as its season opener on Saturday at The MATCH with a question and answer session at 7 p.m and concert at 7:30 p.m. The show will feature the titular piece, in a nod toward this curious complement of President and composer, as well as the world premiere of Fantasia Symphony No. 7 by Beethoven/Tracy Silverman and Beethoven's String Quartet Op. 18 No. 6.

Apollo's Founder and Executive Director Matthew Detrick helps explain this unexpected yet poignant coupling between these two well-known names for the first concert.

"This title references Lincoln’s second inaugural address and trying to heal the country from civil war by showing there can be reconciliation and betterment of society. We channeled Lincoln’s philosophy. That resonates with politics and social justice. Lincoln’s words ring true even more today, than in 1865," he explained. "Beethoven was an inspiration to the composer of 'With Malice Toward None,' who used fragments of Beethoven’s string quartets in this piece. It pairs Lincoln and Beethoven with their philosophy, especially Beethoven’s thought that art should be a force for good."

Apollo Chamber Players has been using music to speak toward a broader meaning for most of its existence. The group's mission is to challenge the traditional notions of classical chamber music presentation and audience engagement by highlighting the rich cultural influences and folkloric traditions of various world cultures. Through this idea, the group aims to engage the global community of Houston with music inspired by specific cultural/ethnic/indigenous traditions. 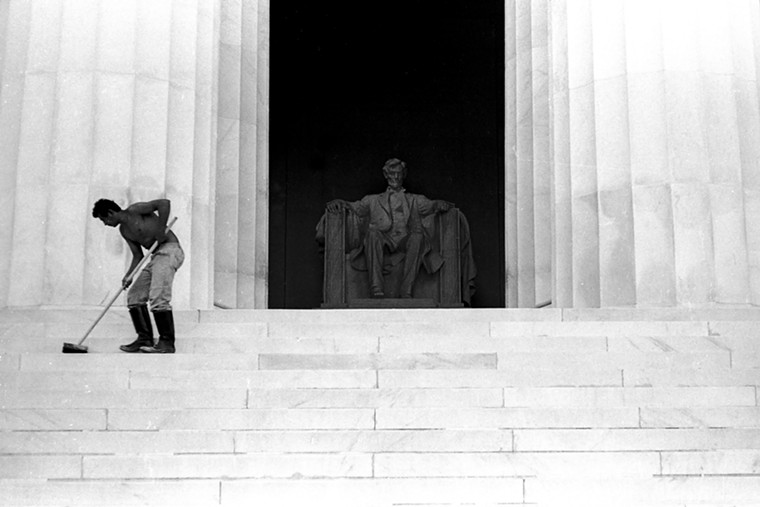 The Lincoln Memorial serves as the inspiration for the cover art of Apollo Chamber Players' album "With Malice Toward None".
Photo by J. Kimo Williams
That mission is realized by the album Apollo recently released last month under the same name ("With Malice Toward None") on Azica Records. It features a collection of globally-inspired compositions and collaborations, with each composer sharing their own personal interpretations of folk music. Works include a title track by Williams, Silverman's previously mentioned composition, Pamela Z’s "The Unraveling, What is the Word?" by Christopher Theofanidis and Mark Wingate, new arrangements of a trio of Armenian folk songs by pioneering Armenian composer Komitas, and Eve Beglarian’s "We Will Sing One Song" for duduk, string quartet, percussion, and track.

Upon its release last month, the album shocked Apollo with how well it was received, including the fact that it bested one highly known musician: Yo-Yo Ma.

"I checked in mid-August, and we were tenth on the new release chart. Over the course of the week, it moved up to sixth, then second. Yo-Yo Ma’s album was still there. I thought we would never surpass him, but then the day before the official dropping of the record, one of the composers sent a text saying Yo-Yo Ma's album had dropped down in the charts. We had a text chain going on to celebrate that," Detrick said.

"The Amazon rankings change frequently, but to have a No. 1 album for a few days is a great accomplishment. We’ll see we here it goes from here. It feels really good after all the work we put into the disc. It was four years in the making if you count some of the pieces on the disc that we commissioned four years ago and recorded as late as February of this year," he added.

Detrick mentioned the album is one of the most difficult and special projects the group has undertaken and how authentic the culture of various regions is represented on the recording.

"We recorded a lot of times in different places. For 'We Will Sing One Song,' Apollo recorded the quartet, and the percussionist recorded in Los Angeles. Then, when we were going to record the duduk player, his trip to Houston was cancelled. [In a change of plans,] he was going to record this part in Armenia, but that was also during a conflict with Armenia and Azejbaijan. There were drones flying over his home. That’s the international vibe that this disc has...not only in the folk music represented but also how it was put together across many countries."

That same variety can be found throughout Apollo's upcoming season. In November, Apollo will feature Latin Grammy-winning tango composer and bandoneon performer Hector del Curto for a program celebrating the 100th anniversary of the birth of Astor Piazzolla. In December, the group will perform a cross-cultural program with Christmas, Jewish and Kwanzaa-inspired music featuring a new commission by Brian Nabors spotlighting vocalist Wayne Ashley, a member of the Grammy Award-winning Houston Chamber Choir.

February 2022 introduces new music by Sephardic/Ladino scholar Isabelle Ganz and Prairie View A&M University professor John Cornelius along with Houston’s newest Poet Laureate, Outspoken Bean. May 2022 will conclude the season with the live world premiere of "In the Shadow of the Mountain" by Jennifer Higdon, the world’s most performed female living composer. In the same concert, Lara Downes will play the Southwest premiere of Florence Price’s recently discovered "Piano Quintet in A Major."

Detrick said, "I am very proud that we’re commissioning and featuring as many artists of different nationalities and races in our upcoming season. That’s something that is part of our mission, and it’s even more important now to give a voice to someone who hasn’t had the same opportunity to share their voice and their talent."
With Malice Toward None will start with a Q&A at 7 p.m. and performance at 7:30 p.m. on Saturday at The Match, 3400 Main. For tickets or information, visit apollochamberplayers.org or matchouston.org/presenter/apollo-chamber-players or call 713-521-4533 or 832-496-9943. $10 - $40.

An encore performance will take place at 7:30 p.m. on September 15 at the University of Houston-Clear Lake's Bayou Theater, 2700 Bay Area Boulevard.
California Privacy Policy California Collection Notice
Do Not Sell My Info
Use of this website constitutes acceptance of our terms of use, our cookies policy, and our privacy policy The Houston Press may earn a portion of sales from products & services purchased through links on our site from our affiliate partners. ©2021 Houston Press, LP. All rights reserved.