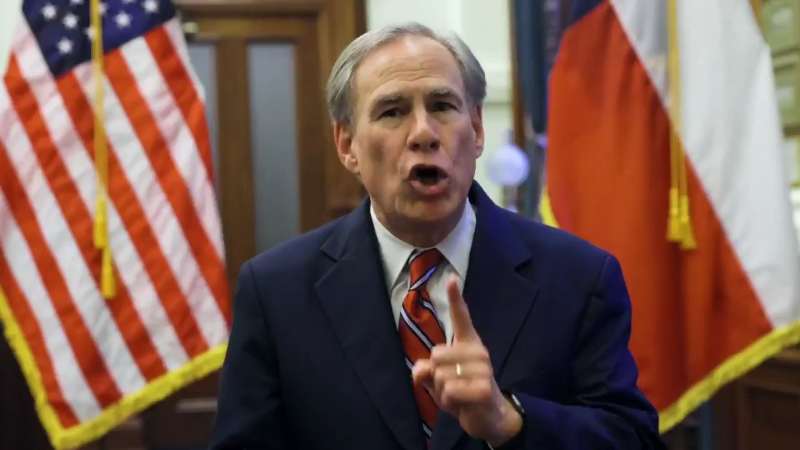 Screenshot
Gov. Greg Abbott is giving the Lege a couple weeks off before calling them back to work.
On Tuesday evening, Gov. Greg Abbott called yet another special session of the Texas Legislature, ordering state lawmakers to head back to Austin for one more round of legislating starting September 20.

Abbott’s announcement came hours after he signed Senate Bill 1 into law, the controversial set of GOP election reforms. It was the months-long battle over that election bill and lawmakers’ failure to pass it into law during the regular session earlier this year that led Abbott to call for the previous two special sessions.

This time around, the main item on the new special session’s agenda (which Abbott has the sole power to set) is legislative redistricting, a contentious, highly partisan ritual that takes place at least every ten years once the U.S. Census publishes its updated population counts for the country.

A fall special session to handle redistricting was guaranteed once it became clear the census results would be delayed by months until August of this year. State Sens. Sarah Eckhardt (D-Austin) and Roland Gutierrez (D-San Antonio) have already filed a lawsuit attempting to block the Legislature from drawing new maps until 2023. They allege that language in the Texas Constitution should be strictly interpreted to prevent redistricting from taking place until the first regular legislative session after census results are published.


So far, that effort to block redistricting hasn’t gained any traction. Most political observers believe redistricting will end up being handled in the upcoming special session (especially if the fully-GOP Texas Supreme Court weighs in on the matter as expected). But if Texas' last few attempts at redistricting, whatever maps the Lege's Republican majority ends up drawing will likely be challenged in federal court by Democrats and their progressive allies.

"The Texas Legislature now has the opportunity to redraw legislative and congressional districts in accordance with the new census numbers," Abbott said in a statement Tuesday evening. "In addition to redistricting, there are still issues remaining that are critical to building a stronger and brighter future for all Texans."

Additionally, Abbott is asking lawmakers to take one more crack at passing Lt. Gov. Dan Patrick’s pet bill to ban transgender kids from playing on the school sports teams that align with their gender identity. He also wants the House and Senate to pass new laws “regarding whether any state or local governmental entities can mandate that an individual receive a COVID-19 vaccine and, if so, what exemptions should apply to such a mandate.”

Notably absent from the third session’s agenda is similar legislation concerning mask mandates. Abbott had previously asked the Legislature to rule on whether or not local governments could make rules on mask wearing of their own, but few if any of his Republican allies seemed particularly enthusiastic about taking up that cause during the previous special session.

Rounding out Abbott’s new agenda is “Legislation similar to Senate Bill 474,” the anti-animal cruelty bill that would have forbidden Texans from chaining up dogs with excessively heavy chains and from leaving their dogs tethered outside without suitable shade, drinking water and shelter.

The dog-safety bill passed by huge margins during the regular legislative session months ago, but Abbott then drew the ire of dog lovers of both parties when he vetoed the bill.

In his veto statement, Abbott argued that “Texas is no place for this kind of micro-managing and over-criminalization.” He’s now called for a new animal cruelty bill that “addresses the concerns expressed in the governor’s veto statement,” so we'll see just how many limits on mistreating dogs Abbott is willing to tolerate this go-around.