This Week in Houston Food Events: Meatless Monday and a Happy Hour Refresh 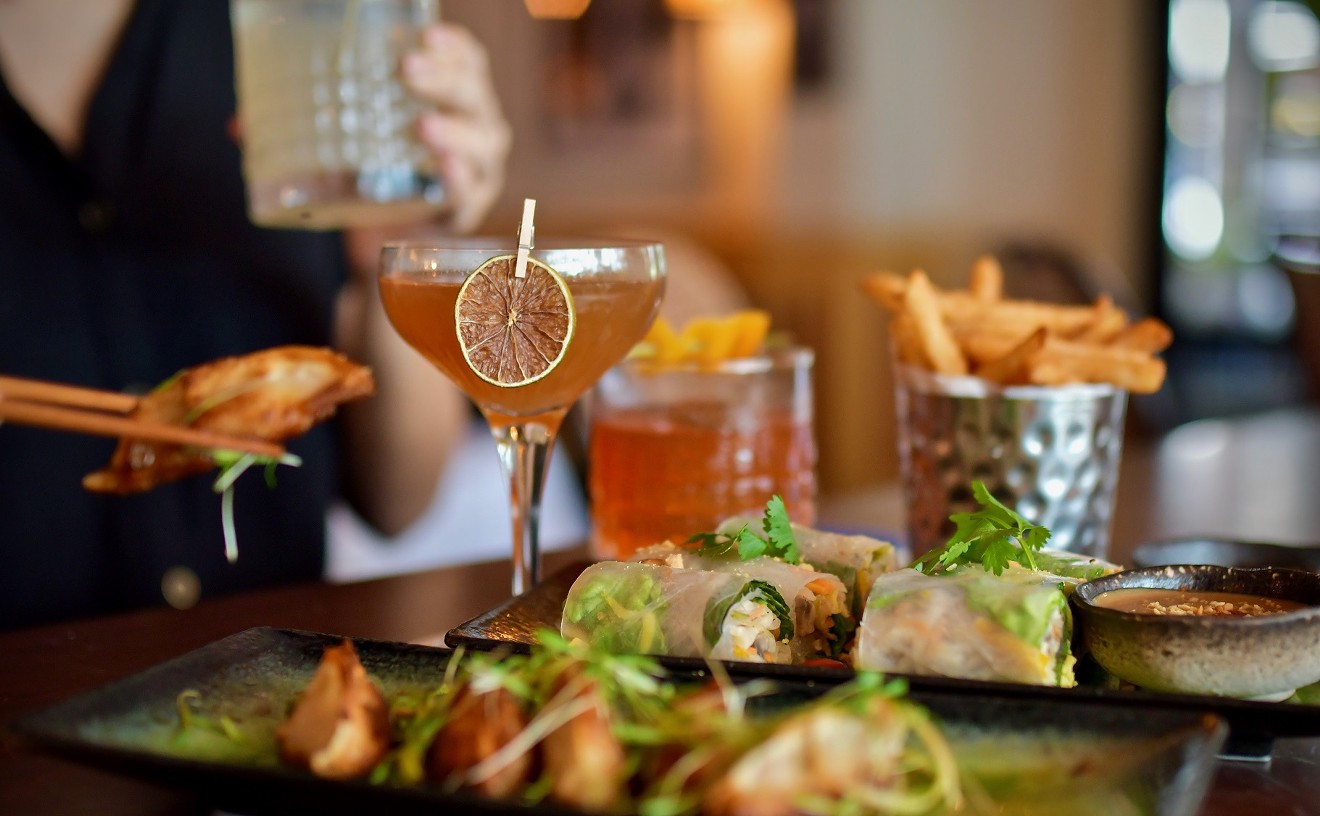 Le Colonial, 4444 Westheimer, is hosting a Penfold Wine Dinner, showcasing a collection from the Australian wine producer’s wine library along with a five-course menu curated by executive chef Hassan Obaye. The progressive menu will feature by-the-glass pairings with dishes including spot prawn aquachile, pan seared halibut with yuzu beurre blanc, slow lamb and foie gras sando, and apple tarte tatin. The event will be hosted in Le Colonial's sultry upstairs lounge beginning with a cocktail reception and featuring hand-passed hors d'oeuvres at 6 p.m. followed by a seated dinner at 7 p.m. Tickets begin at $249.99 excluding tax and a 20 percent gratuity.

The Pit Room, 1201 Richmond, is celebrating five years of Texas BBQ with a Chopped Brisket Sandwich for $5 (regularly $10) on Wednesday, September 15. The special is available dine-in only from 11 a.m. to 9 p.m.

Julep’s Alba Huerta will be joined by Woodford Reserve’s Elizabeth McCall for a Whiskey 101 Class beginning at 7 p.m. McCall will teach about the bourbon distilling process, the history of Woodford Reserve and then share tips for the at-home bartender from selecting the right glass to the best ice and dilution techniques, and more. Tickets are $15.

After a brief hiatus, MARCH, 1624 Westheimer, will be reopening on Thursday, September 16. With a reset menu, the team’s studies of the Mediterranean are taking them north into Andalusia and Murcia, where they'll continue to explore the richness of the region. Score reservations online.

Truck Yard, 2118 Lamar, will host its all-day Trucktoberfest on Saturday, September 18, featuring a lively line-up of adult, kid, and dog-friendly activities such as a Stein Holding Contest, Pretzel-Eating Contest and Wiener Dog Race, plus the tapping of the Trucktoberfest brew. The event is free to attend.

C. Baldwin, 400 Dallas, will be celebrating Negroni Week in its Lobby Bar from September 13–19. Now in its ninth year, Imbibe and CAMPARI’s Negroni Week is a celebration of one of the world’s great cocktails, and a collective effort by the restaurant and bar industry to raise money for charitable causes around the world. Lobby Bar’s Negroni cocktail will benefit No Kid Hungry, selling for $12 and with $1 going to charity.

$99 Wine and Dine for Two at Brennan’s

Brennan's of Houston, 3300 Smith, has brought back its $99 three-course meal for two, available September 1 through 30 and accompanied by wine selections (a bottle or four glasses) to help jazz up your next date night. Choose from Creole classics including Turtle Soup, Blue Crab Cakes, Grilled Filet Mignon and Shrimp and Grits, as well as Bananas Foster and Creole Bread Pudding.

Alley Theatre is celebrating its 75th anniversary this fall, reopening for the first time in 18 months, and Eighteen36, 2221 West Alabama, wanted to commemorate and give back to the historic art organization. The bar & restaurant has curated a specialty cobbler cocktail, The Alley Cobbler, which will be available throughout September. Made with Amaro Montenegro, house made blueberry syrup and lemon juice over crushed ice, it goes alongside a number of menu items in benefit of the Alley Theatre, including Greens, Eggs and Spam, the Kickin Chicken Bowl and Turkey Burger Bowl.

Etoile Cuisine et Bar, 1101-11 Uptown Park , will be raising funds for the Houston BARC Foundation this September, supporting its effort to improve the quality of life for all animals in Houston. Chef Philippe Verpiand has created two special prix fixe menus, one for dinner ($65 for four courses, with $7 going to charity) and one for weekend brunch (36 for three courses, with $4 going to charity.

To bring awareness to the important issue of hunger and with the ultimate goal of a world without food banks, the Houston Food Bank and hunger relief agencies across the country have designated September as Hunger Action Month. Throughout the month, HFB will have interactive food justice activities and other learning opportunities available in our lobby and volunteer areas, and volunteers can learn about the myths of food insecurity and what critical policy changes are brewing in Congress. In addition to a full month of events and special activities, community organizations that combat food justice will be featured on its social media on September 15 and 19, including Plant it Forward and Ivy Leaf Farms in Sunnyside.

This September, chef Hugo Ortega will once again offer fresh corn tamales at his namesake Hugo’s, 1600 Westheimer. The tamales are made with fresh corn masa and come two to an order, served with salsa macha verde, crema fresca and housemade queso fresco for $12.

Ike’s Love & Sandwiches is celebrating Firefighter Appreciation Month by offering first-responders 25 percent off their favorite sandwiches as a thank you for their service. Present a proof of ID at the counter to redeem.

Taco of the Month at Torchy’s Tacos

The Tailgater has returned to Torchy’s Tacos as its September Taco of the Month. Featuring panko-battered chicken on a bed of crisp bacon and topped with green chile queso, Diablo wing sauce, poblano ranch slaw, blue cheese crumbles and a drizzle of honey, all served on a flour tortilla, the taco sells for $5.75 a pop.

Banh Mi of the Month at Yelo

Yelo, 23119 Colonial Parkway, has introduced monthly specials, beginning with its Banh Mi of the Month as part of its weekend rotation for September. The Bulgogi Banh features house-marinated beef bulgogi piled high in a fresh French baguette with all of the usual banh mi fixins’, including Yelo’s signature pickled papaya and carrot slaw, fresh cucumber, local cilantro, garlic aioli and a new gochujang garlic aioli. Nab it every Saturday and Sunday in September for $8.50 while supplies last.

Le Colonial, 4444 Westheimer, has refreshed its Social Hour menu, offering chef-crafted bar bites ($8) including Le Colonial’s Bo Bia (chilled vegetable rolls) with creamy peanut sauce; Cha Gio (crispy rice paper rolls) made with shrimp and pork, Asian mushrooms, mint, cilantro and chili lime sauce; and the long-awaited return of the Five Spice Frites with spicy aioli. Elevated libations include a Daiquiri ($8) made with Rhum Agricole, French Amer, fresh lime and lemongrass syrup; the Margarita ($8) with Cazadores blanco, dry curacao and fresh lime; and the Old-Fashioned ($8) featuring Buffalo Trace, house simple and bitters; and select wines are $8 by the glass. Social Hour runs Monday through Friday between from 5 to 7 p.m. in the upstairs lounge.
California Privacy Policy California Collection Notice
Do Not Sell My Info
Use of this website constitutes acceptance of our terms of use, our cookies policy, and our privacy policy The Houston Press may earn a portion of sales from products & services purchased through links on our site from our affiliate partners. ©2021 Houston Press, LP. All rights reserved.