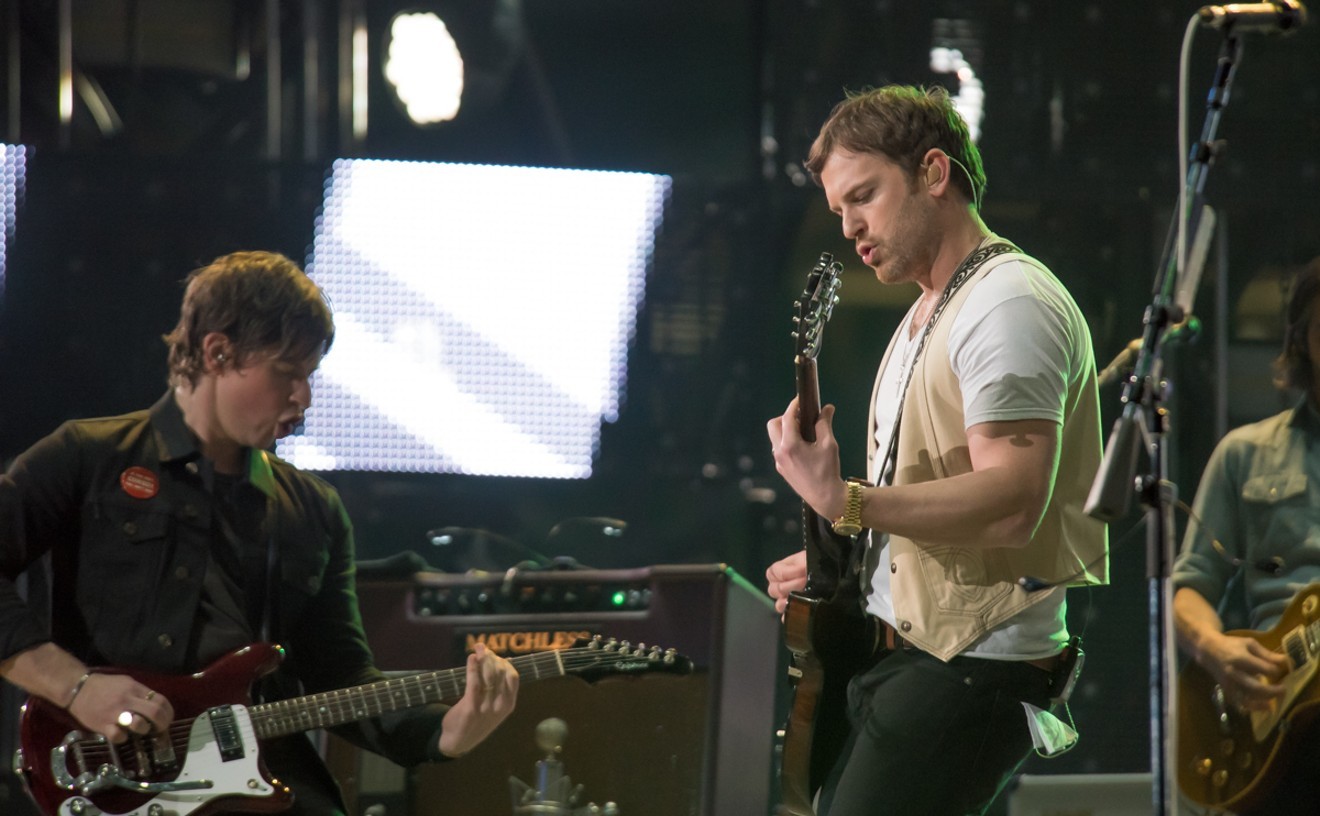 Photo by Jack Gorman
Kings Of Leon at RodeoHouston in 2019
This week started with Tropical Storm Nicholas being upgraded to a hurricane before being downgraded to a tropical storm again. But the upgrade prompted heartthrob Harry Styles to cancel his Monday night performance at Toyota Center at the 11th hour. We’ll be sure to let you know when the “Watermelon Sugar” singer reschedules. In the meantime, there are a lot of good shows to enjoy this week.
Lil Baby
Woodlands Pavilion – 09.16
Lil Baby has had a busy few years. Since 2017, he has released two studio records, a collaborative album with fellow trap star Lil Durk and half a dozen mixtapes. The 26-year-old Atlanta native has been featured alongside the likes of Drake, Future and Megan Thee Stallion, which certainly hasn't hurt his brand. Supported by Lil Durk, Coi Leray and Bankroll Freddie, the up-and-coming rapper will bring his “Back Outside” tour to the Woodlands Pavilion tomorrow morning.
Eric Clapton
Toyota Center – 09.17
In the ‘60s, Eric Clapton rose to fame as the guitarist for Cream. He began his solo career the following decade with a self-titled record that turned 50 earlier this year, with an anniversary edition release to boot. Supported by Jimmie Vaughan, the iconic rocker – who has been packing arenas for more than half a century now and has been inducted into the Rock And Roll Hall Of Fame on three separate occasions – will perform at the Toyota Center on Friday night.
Kings Of Leon
Woodlands Pavilion – 09.18
Barely six months following the release of their eighth studio album, Kings Of Leon will return to the Bayou City. The Nashville-based quartet – comprising three brothers and a cousin – found mainstream success with 2008’s Only By Night, and they’ve since become a household name. Supported by Cold War Kids, Kings Of Leon's “When You See Yourself” tour is scheduled for this Saturday at the Cynthia Woods Mitchell Pavilion.
Korn & Staind
Woodlands Pavilion – 09.19
Nu-metal pioneers Korn released their 13th studio album, The Nothing, to critical acclaim in 2019. Alt-rockers Staind, meanwhile, haven’t released a proper record in a decade. New music has been teased, however, and this co-headlining tour seems to serve as proof that the band that brought us “So Far Away,” “Right Here” and “It’s Been Awhile” is officially back. Fans can see their co-headlining show at the Woodlands Pavilion on Sunday night.
In This Moment & Black Veil Brides
Bayou Music Center – 09.21
Last year, In This Moment and Black Veil Brides both released new albums. Mother and Re-Stitch These Wounds received high marks from fans, but the two metalcore outfits were unable to tour due to the ongoing pandemic. Vaccinations be praised, both groups are scheduled to bring their co-headlining “The In-Between” tour to Bayou Music Center on Tuesday. Get their early to see alternative metal rockers Ded open the show.
California Privacy Policy California Collection Notice
Do Not Sell My Info
Use of this website constitutes acceptance of our terms of use, our cookies policy, and our privacy policy The Houston Press may earn a portion of sales from products & services purchased through links on our site from our affiliate partners. ©2021 Houston Press, LP. All rights reserved.