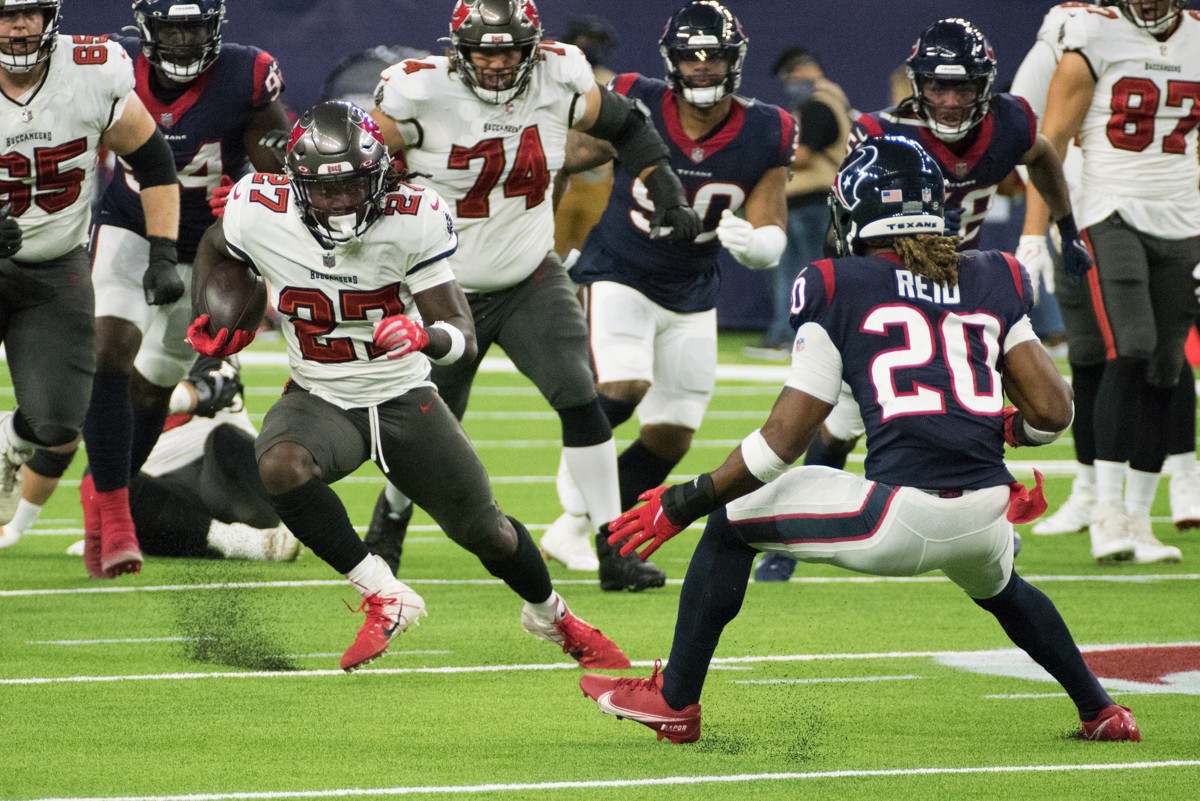 Photo by Jack Gorman
Justin Reid's health is a big key for the Texans on Thursday night,
Two weeks into an NFL season that was already expected tp have a lot of trying weeks for the Houston Texans and their fan base, we got our first one this week. On Sunday in Cleveland, starting quarterback Tyrod Taylor, in the midst of playing some of the best football of his life, pulled a hamstring right before halftime, leaving the Texans' QB duties in the hands of rookie Davis Mills.

Three days later, the team put Taylor on the injured reserve list (meaning he is gone for AT LEAST three weeks), Mills was officially elevated to the starting role, and Jeff Driskel, who set the unofficial record for "number of media members pelted by his incompletions at practice" during training camp, is now the backup.

Trying times, indeed. Add in the fact that not only do you have the top-ranked (according to Football Outsiders' DVOA efficiency metric) defense in the league coming to town tonight, but the next two opposing defenses, Buffalo and New England, are rated second and third, and Mills is basically going from pre-K to Harvard in short order.

The spread on this game crept over a touchdown earlier in the week, with the Texans in a decided underdog role. Can they pull off the upset? Well, that will depend on a few things. Here are four of them:


4. Who is THIS Sam Darnold?
The Panthers were believed to be one of the teams that would give the Texans the sun and the moon for Deshaun Watson, before the lawsuits started flying in March. Once it became evident that Watson would not be available, the Panthers turned their attention to a less expensive former first round pick, New York Jets washout Sam Darnold. The former number three overall pick from 2018 finished 2020 ranked 33rd in Quarterback Rating (QBR). (NOTE: there are only 32 teams in the NFL.) The Panthers are betting on Darnold reaching his potential, and two games under the watchful eye of Panthers OC Joe Brady, it's looked pretty damn good, as Darnold is 6th in QBR through two games. The key here will be Lovie Smith and the suddenly turnover-generating Texans defense confusing Darnold into some of the mistakes from his Jets days. Hopefully, there is some of the "old Sam Darnold" in still in his football soul, and he is possibly still has "ghost vision" working against him.

Sam Darnold is mic’d up and he came to the sidelines and said, “I’m seeing ghosts.”

3. Mistake free football
On the other side of the equation, winning the turnover battle is the bare minimum for the Texans to have a competitive shot in any game this season. Their ability to do that took the biggest hit possible when Taylor left the game on Sunday. Taylor has routinely been among the most careful quarterbacks with the football throughout his career. Davis Mills, on the other hand, threw five interceptions in one practice just a month or so ago. In Week 1, against Jacksonville, in their 16 point win, the Texans committed no turnovers and offensively were practically clean from penalties. They have to have Mills own favorable down and distance situations all game long. Otherwise, the Panthers are going to add SIGNIFICANTLY to their 10 sacks and 21 QB hits they've logged so far this season. One thing that would really help....

2. Running game revival
If you take out Tyrod Taylor's 55 yards on 5 scrambles (and Davis Mills' 2 carries for -1 yards), you're left with 62 carries from Mark Ingram, Phillip Lindsay, and David Johnson that are collectively barely averaging three yards per carry. This absolutely will not work with a rookie quarterback under center, especially one who himself does not pose a real threat in the run game. If the Texans' backs and offensives line can cobble together some 2nd and 5's, and 3rd and 3's, those types of down and distance situations, Mills will have a chance. Otherwise, we are looking at low probability conversion possibilities that will then have us screaming....

1. "Davis Mills, run for your life!"
That's what Zach Wilson and Jameis Winston, the Panthers' first two opposing quarterbacks this season, were doing:


The Panthers, the Texans’ opponent on Thursday night, have 10 sacks and 21 QB hits through two games.

This is a reminder to the Texans' offensive line, which has actually been very good in pass blocking thus far in 2021 (just two sacks allowed) — we are one bad hit on Davis Mills away from Jeff Driskel playing quarterback behind you.

And nobody wants that.