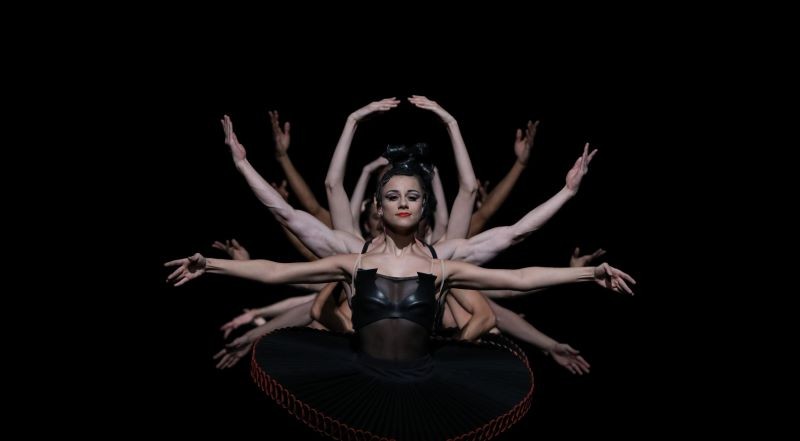 Photo by Amitava Sarkar, Courtesy of Houston Ballet
Houston Ballet Soloist Tyler Donatelli and Artists of Houston Ballet in Stanton Welch’s Divergence.
It seems more than fitting that if you want to see crowds return to a theater that you up your chances by  picking a crowd pleaser like Divergence as Houston Ballet has done as part of its fall opener the Margaret Alkek William Jubilee of Dance.

Dancers are scheduled for five mixed rep performances starting a week from now at the Wortham Center. They are still wearing masks in rehearsal but as soloist Tyler Donatelli told us, they've just been cleared to perform maskless on stage for audiences

Donatelli has a busy time ahead as she'll be dancing in the first and ninth movements of Divergence as well as performing solo in Artistic Director Stanton Welch's A Time To Dance solo. She'll be doing a pas de deux from the full length ballet Don Quixote with partner Chandler Dalton and she's also in Good Company. "Yes, I have a lot," she says with a laugh.

Divergence continues to be so popular, she believes, because while Welch created it in 1994, "it still has that modern edge to ballet and the music by Bizet is exciting and the costumes are interesting. It really creates something fun on stage and it's very entertaining to watch."

Her solo is originally part of full length ballet by Welch. "This solo is over five minutes long. It's about a girl maturing into a woman. That dance is really fun; I've done it before," she says. It will be her first time to do the Don Quixote pas de deux and she's most excited about that. "Doing a full length pas de deux coming back from the pandemic was a real challenge after being quarantined and not dancing as much the past year."


She and her fellow dancers have been hard at work to get themselves into performance shape, she says. During the pandemic they were able to practice one or two hours a day. "Usually we have six hour days plus class so that's seven hours.

"Coming back, stamina and strength really was a hurdle to get over I think I'm finally getting back into the normal schedule shape. Once I finish a dance I don't feel like my legs are going to fall off now."

Prior to the pandemic, Donatelli says, "As a dancer I've never taken off more than four weeks at a time." Rehearsing with masks is no one's idea of a great time, but she says it did, in a way, help build their stamina. "I don't have as much air to breathe."

There will be other dances on the bill but when we asked for a complete program listing, we were told Houston Ballet wants to surprise the audiences in attendance with some special numbers. So it looks like you really have to be there.

"It's our first show back and you’re just going to see so much pure love for dance."

Performances of the Margaret Alkek William Jubilee of Dance are scheduled for 7 p.m. Thursday, September 30; 7:30 p.m. Friday, October 1 and Saturday, October 2; and 2 p.m. Saturday, October 2 and Sunday, October 3 at the Wortham Center, 500 Texas. For more information, call 713-227-2787 or visit houstonballet.org. Patrons are required to wear masks throughout the performances except when eating or drinking. $25-$208.
California Privacy Policy California Collection Notice
Do Not Sell My Info
Use of this website constitutes acceptance of our terms of use, our cookies policy, and our privacy policy The Houston Press may earn a portion of sales from products & services purchased through links on our site from our affiliate partners. ©2021 Houston Press, LP. All rights reserved.