Another Go at Led Zeppelin in Beast, the Story of Drummer John "Bonzo" Bonham 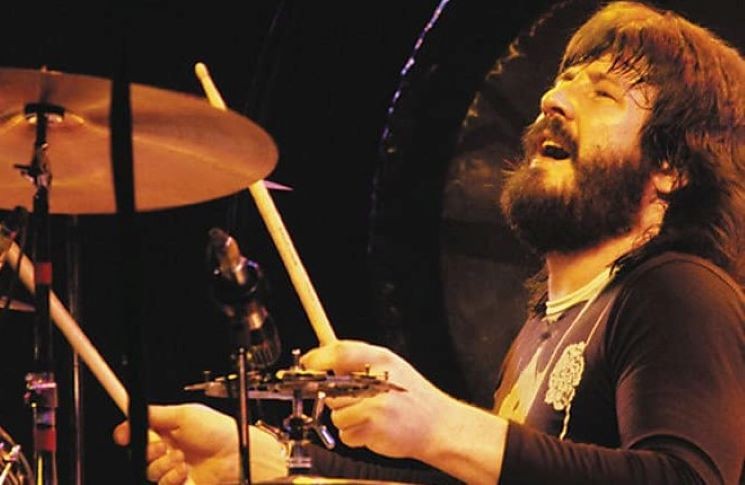 Book cover detail
Not an easy musician to know.
Ah, the drum solo. Its arrival means different things to different people. Some view it as the perfect time for a bathroom break. Others are excited by the opportunity to grab a quick snack at the concession stand. And then there are those who are transfixed by the proceedings, checking their watches to note the exact length of the spectacle.

If the numerous and frequent descriptions of rapturous audience reactions to John “Bonzo” Bonham’s drum solos in the new biography Beast – John Bonham and the Rise of Led Zeppelin (Hachette Books) by C.M. Kushins are to be believed, one wonders how the planet was not knocked off its axis at the conclusion of his 30-minute percussion showcases. Surely the simultaneous nigh-unto-orgasmic reactions of thousands of fans would have been enough to at least alter tidal patterns for years to come.

But I kid. When writing about Led Zeppelin, it is easy to slip into hyperbole and clumsy similes, typical of the style employed in many previous biographies of the band. In discussing Led Zeppelin’s recorded debut, Kushins writes, “(T)he heavy opener, “Good Times Bad Times” kick-started the album like a starter’s pistol – that is, if the gun had been substituted for an atomic bomb and John was the one lighting the fuse.”

Occasional gushing aside, Kushins has done Zeppelin scholarship a service with his new biography of Bonham, a man who was christened “Le Bete (The Beast)” during one of the band’s early tours by a French employee of Atlantic Records. Since Stephen Davis’ lurid Hammer of the Gods was published in the mid-'80s, there has been no shortage of Zeppelin books on the market. But this is the first substantive study of Bonham, a troubled man who functioned well behind his drum kit but poorly in his life.


A musician himself, Kushins provides an insightful analysis of Bonaham’s technique and the continuing influence he has on rock and roll drummers over 40 years after his death. While he may, at times, take too deep of a dive for the casual reader (e.g. an explanation of Bonham’s use of one measure in 17/18 time during “The Ocean,”), throughout the book, Kushins points out subtle musical details which should enhance the understanding and appreciation of the Zeppelin catalog for any fan.

But books about drums and paradiddles generally don’t sell many copies, so Kushins interpolates tales of Bonham’s drunken escapades throughout the volume, calling to mind an episode of MTV’s Behind the Music, minus the redemption / conquering of demons denouement. Many of the stories have been told before, but Kushins has conducted a series of interviews with individuals who were in Zeppelin’s coterie, generating some new additions the Zeppelin legend. Or at least they are new to this reader. To wit:

- Bonham’s drum solo from Led Zeppelin II was supposed to be called “Pat’s Delight,” in tribute to the drummer’s wife. However, when Bonham was playing the recording at home, his son said, “It’s big – like Moby!” And so the title was changed to “Moby Dick.”

- Black Sabbath guitarist Tony Iommi was foolish enough to ask Bonham to serve as his best man. The wedding reception, held at the posh home of the bride’s parents, did not go so well. Measures had been taken to keep Bonzo and Sabbath vocalist Ozzy Osbourne off the sauce, so the musicians made do with cocaine. One of the hosts privately asked Iommi why his guests seemed to disappear periodically and sniffing when they returned, adding, “It’s funny, none of your friends are eating.”

- In 1973, Bonham attended a concert by Chuck Berry in Birmingham, England. Disgusted with the performance by the drummer in the pick-up band backing Berry, Bonzo shoved the man aside and took over his kit for the next three songs.

- In an inebriated attempt to hide a baggie containing 1,500 Mandrax tablets, Bonham deposited his stash inside one of his drums. Unfortunately, he forgot that the drum kit was made of acrylic and, therefore, transparent.

- Bonham, miffed about the limo assignment during an outing to a club in Harlem with members of the Rolling Stones, pulled a gun (unloaded, he claimed) on Mick Jagger while they were en route. The Stones were not amused.

- The drummer once threw a carton of orange juice at Ten Years After guitarist Alvin Lee during the latter’s performance, drenching the musician and covering his guitar in sticky goo. Lee to Bonham after the set: “You’re an asshole, Bonham, a real asshole.”

Book cover
And there you have the gist of Beast. John Henry Bonham was a real asshole. Kushins makes a stab at trying to explain – some might say justify - Bonham’s deterioration into a sadistic thug with stories from interview subjects of how he overindulged in substances because he was homesick. Or due to his insecurities. Or whatever. This apologist view was the Zeppelin party line in the ‘70s, and evidently some still try to maintain it. Kushins generally lets the facts speak for themselves, meaning that many readers will probably end up siding with Alvin Lee.

A more thorough examination of Bonham’s personality would have been welcome. Was mental illness the source of his cruel and violent outbursts? Were his addictions a result of relentless self-medication? Was he a celebrity gradually emboldened by money and a sense of entitlement? Did his alcoholism exacerbate previously repressed psychological issues? Or was he just, you know, an asshole. Kushins provides no conclusion, and the reader is left less than satisfied.

At the risk of engaging in nitpickery, some facts cited in the book are dead wrong. Even if Kushins made a few errors, an editor with any knowledge of Led Zeppelin should have been able to correct basic inaccuracies. Does anyone who has seen the film The Song Remains the Same recall that it was Zeppelin bassist John Paul Jones riding a white horse along a beach with his golden locks billowing behind him, as Kushins describes in his book? No. Because the studly horseman was in fact lead vocalist Robert Plant. In his discussion of “D’yer Maker” from Houses of the Holy, Kushins credits the song’s name to “Jamaican patois” rather than Cockney pronunciation, which produces the actual pun in the title. Additionally, several audio engineering terms are used incorrectly during Kushins’ discussion of album production. As Jamie Lee Curtis said in A Fish Called Wanda, “Those are all mistakes, Otto.”

Bonzo’s life ended in 1980, as Zeppelin was preparing for a world tour following the release of In Through the Out Door. Like Jimi Hendrix, he died ignobly after suffocating on vomit during his sleep. Following an inquest, Bonham’s death at the age of 32 was ruled “death by misadventure.” Several weeks later, Led Zeppelin issued a brief statement: “We wish it to be known that the loss of our dear friend and the deep sense of undivided harmony felt by ourselves and our manager have led us to decide that we could not continue as we were.”

Want it on a bumper sticker? Come for the musical analysis, stay for the new stories. But maintain a healthy skepticism. Due to the ongoing myth machine (maintained these days by guitarist Jimmy Page), few matters involving Led Zeppelin are as simple or innocent as they might seem if one takes the “official” explanation as gospel. Yes, John Bonham was a loving husband and father, but over the years he and his goons (sorry, “security personnel”) put several men in the hospital after backstage beatings, and that equation can never balance. Where was Zeppelin manager Peter Grant or any of Bonham’s bandmates in all of this? Enabling their damaged drummer in the interest of future riches, or so it would seem.

Credit must go to Kushins for giving readers a primarily objective portrait of a troubled artist, resisting the temptation to burnish the legend. Failing in any sort of attempt at explaining the Bonham enigma, at the very least he has given readers some additional nuggets to chew on, though most of them are thoroughly distasteful. As journalist Ellen Sander wrote after an attempted sexual assault by Bonham in Zeppelin’s dressing room, “If you walk inside the cages of the zoo, you get to see the animals close up, stroke the captive pelts and mingle with the energy behind the mystique. You also get to smell the shit first-hand."
California Privacy Policy California Collection Notice
Do Not Sell My Info
Use of this website constitutes acceptance of our terms of use, our cookies policy, and our privacy policy The Houston Press may earn a portion of sales from products & services purchased through links on our site from our affiliate partners. ©2021 Houston Press, LP. All rights reserved.