Yes Keyboardist Geoff Downes is on a Proggy Quest 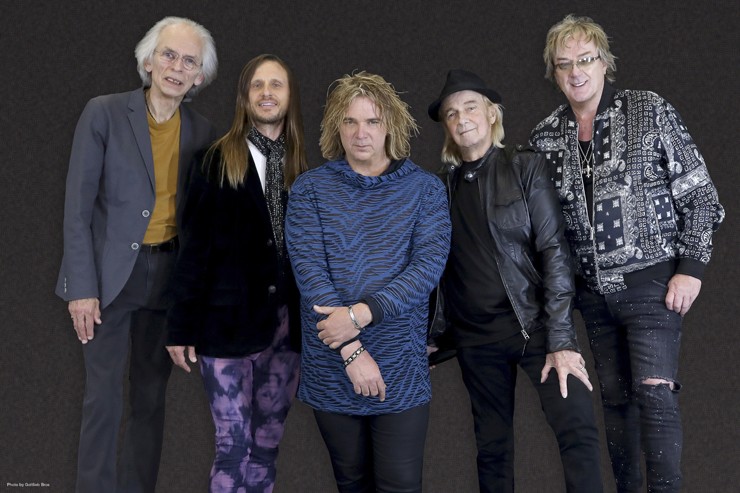 When MTV recently celebrated its 40th anniversary, the old trivia question about “What was the first video ever played on the channel?” came around again. It was, of course, “Video Killed the Radio Star” by the English duo Buggles, made up of singer/bassist Trevor Horn and keyboardist Geoff Downes. In 1980 both would later (very) briefly join the Prog Rock group Yes, and Downes returned to the band full-time in 2011.
click to enlarge


Still, it’s surprising that when he appears onscreen via a Zoom interview from his home in England, sporting a T-shirt with an old school MTV logo decorated as the United States flag. That begs the question: Did Buggles know how prophetic that song (written by the pair with Bruce Woolley, who did the original version) would become?

“The song had been out two years before and had been No. 1 all over the world except in America!” Downes laughs. “By the time MTV showed it, Trevor was off doing productions and I was in [the band] Asia. So we didn’t give it a thought! Though in hindsight, it was pretty prophetic.”

Today, Downes is ready to discuss the new record from Yes, The Quest (Inside Out Music). Featuring eight tracks and three bonus tracks, the songs were largely discussed and at least started coalescing at the end of 2019 and early 2020. But then the pandemic hit and things changed. It would now have to be recorded with members flung across the U.K., the U.S., and Barbados.

“It was a challenge,” Downes says. “But I was used to doing it that way before, in the albums I did with the Chris Braide in the Downes Braide Association. But for the other guys in Yes, I think it was a bit different.”

The “other guys” include Downes, classic lineup members Steve Howe (guitar) and Alan White (drums), Jon Davison (vocals) and newish bassist Billy Sherwood, who took over after the death of founding member Chris Squire. Squire was the only member of a constantly-rotating lineup who appeared on every Yes record.
“I think we’re the longest lasting lineup of all time! Over six years or something!” Downes laughs. “It was nice that we had this opportunity to make this album. We’ve talked about it for years. We exchanged all the ideas before the pandemic, then we had to figure out how to make it.”

Some of those ideas in an overall more gentle-sounding record include calls for unity and humanity working together, hope for the future, and some romance. Close to Downes’ heart in particular is the material about climate change like lead single “The Ice Bridge.”

“But we didn’t want to be too heavy about it,” he adds. “Like stand on soapbox and dictate to the world about it.”

For Downes, putting fingers to keys is something of the family business. His mother was an accomplished piano player, and his father the local church organist—and a bank manager.
click to enlarge


“He was good at both things!” his son laughs. “I would say there was a lot of piano and keyboard music around me in the house. That was the way I was brought up, and I started playing piano when I was six and then went to music college. I was fortunate I got involved in the music scene in London.”

Downes arrived in London in the mid-‘70s, and by that time English Rock Stars had developed something of an exclusive intermingling practice at clubs and venues like the Speakeasy, the Scotch of St. James, the Marquee, Bag O’Nails, and the Ad Lib. By that time, the group that he would eventually join were already known.

“All of the members of Yes met at the Speakeasy and the Marquee. These were clubs that musicians went to. You’d see Jimi Hendrix having a drink with George Harrison,” Downes says. “I think all of Yes also met their wives at the Speakeasy! I heard all the stories from Chris and Steve!”

In the 1980s, Downes found commercial success with Asia, who hit with singles like “Heat of the Moment,” “Time Will Tell,” and “Don’t Cry.” All got a boost by (there it is again) frequent videos plans on MTV.

For many Gen Xers, it was their first exposure to Prog Rock, albeit greatly infused with a pop sensibility.

“They were at the top of their game. I think when I came into the fray, I think I took it more into the melodic and pop areas. And they rose to that challenge. They’d done all the long pieces and the massive progressive rock tours in the ‘70s. This was like a breath of fresh air to them. It still – especially the first couple of albums – had the underlying progressiveness, but it was condensed. There was still musicality in there.”
Finally, while the pandemic has put the kibosh on any touring to promote The Quest, Yes, has booked dates in Europe beginning in May 2022 in which they’ll play the entirely of 1974’s Relayer album (of which only Howe and White actually played on) as well as a greatest hits set.

Downes says it will be a challenge, but he’s looking forward to working on songs that no lineup of Yes has ever played live. The band was inducted into the Rock and Roll Hall of Fame in 2017, but Downes was not among the members chosen to be enshrined at the glass pyramid in Cleveland.

“We’ve done a lot of those early albums in their entirety after I joined in 2011, but Relayer really stuck out,” he says. “It’s a very challenging record, especially for a keyboard player. It’s very intense. It will be a big challenge. I come from a line of Yes keyboardists like Tony Kaye and Rick Wakeman and Patrick Moraz.”

But don’t be surprised if some of the material from The Quest also gets a delayed workout. And even when Yes isn’t active, the 69-year-old Downes has plenty of other musical avenues and collaborations waiting.

“It’s been a very wide ranging career, and I’ve enjoyed every aspect of that,” he sums up. “Working on this Yes album, it was great to communicate with the guys again. I’m very happy with it.”