A Fan of Captain Hook at Stages' Premiere of Hook's Tale 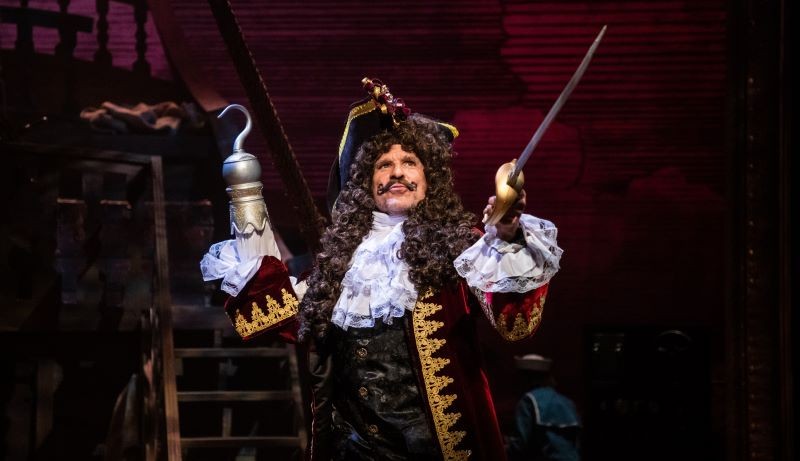 Photo by Melissa Taylor
Donald Corren in Hook's Tale at Stages
When I was a small lad, I’d run around the house in an oversized bathrobe with a wire coat hanger bent inside the sleeve where my right hand should have been. I’d command anyone around – my older brothers mostly – in a squeaky growl meant to sound terrifying. They weren’t terrified, not in the least. They mutinied. They didn’t even understand what that word meant, but they did it anyway. I lost me crew. Their intransigence did not deter me, how could it, because for a brief time, I was that rapacious sea dog Captain Hook, my favorite childhood character.

It all started with Disney. Who of a certain age nowadays wasn’t affected by Disney. I badgered my mother to take me to the movies every day Peter Pan played at the Academy Theatre in Lebanon, Pennsylvania. She dutifully obliged until she, too, mutinied. But it was enough, I was hooked. To get my fill of that notorious buccaneer I collected as much Pan merchandise as my parents allowed: comic books, three Little Golden volumes, a map of Neverland which hung above my bed, hand puppets of the characters, including Smee, and my cherished playmate, a marionette of the infamous Captain.

A fan of Hook at an early age.
Photo by R.W. Groover

Hook was mean, no doubt about. He maroons Tiger Lily on a rock at Skull Island to be drowned by the rising tide; he plants a bomb in Pan’s hideout; he kidnaps Tinker Bell and imprisons her in a lantern, serenading the pixie on the harpsichord to break her resolve and reveal where Pan and the Lost Boys live; he shoots his own shipmates if they disobey his orders; and at the tale’s climax he’s about to make the boys walk the plank if they don’t join his crew. Yet he was very goofy. His dastardly plans were always thwarted; he gets conked on the head with a cannon; he catches cold after a dunking with his duel with Peter; and he’s forever comically eluding the hungry, ticking crocodile waiting impatiently mere feet away to snap up the rest of him.

But he also reeked of class and oily charm. He smoked from a two-cigar holder, very posh and sophisticated. An expert swordsman, he had the nimble precise moves of Errol Flynn. He had a box of gold dress hooks for special occasions, one of which was a corkscrew. How elegant. An accomplished musician, he played the clavier with cheeky abandon. He was thin and lithe, and his clothes spoke of sophisticated taste: red and purple great coat, plumed hat, buckled shoes, lacy cuffs and cravat. He had long thick black hair and a rapier mustache. What a pirate.


Then I discovered James M. Barrie.

It came as quite a shock to me that Disney didn’t write the story. I guess the opening titles of the cartoon flashed by too fast to comprehend. (I’m not sure I could have read them anyway.) But the Lebanon Public Library opened up my seafaring world. There was Captain Hook in his original glory, first in the play Peter Pan, or the Boy Who Wouldn’t Grow Up (1904), then adapted into a book, Peter and Wendy (1911), and in its many variations over the years. There were deeper layers inside Barrie than those Disney chose to animate. But Hook didn’t disappoint, he was still elegant and deadly but with a humanizing empathy that made him a competent foil to Peter’s insufferable youthfulness and folly.

Prolific playwright John Pielmeier (Agnes of God, The Exorcist, an acclaimed TV miniseries adaptation of Ken Follett’s medieval epic, The Pillars of the Earth) knows his Barrie, his favorite author. He wrote a one-man show about this romantic haunted writer, Courage (1983), so dissecting Pan is second nature.

Hook’s Tale, a world premiere via Stages, flies off to the Never Isles with Hook as protagonist. Based on Pielmeier’s novel, the iconic pirate (Donald Corren, exemplary in multiple roles) tells his own story, the true one, not the lies spun by Barrie. Hook will not be appropriated. This is what really happened, he declaims dramatically, as Smee (Ryan Schbach, delightfully doubling as second banana and sound effects wingman) shamelessly peddles Pielmeier’s book across the seashell footlights.

It’s a tale as barnacle-encrusted and smelling of salt air as any boy’s adventure by Robert Lewis Stevenson, with able assist from Gregory Maguire’s adult riff on Wicked. Hook’s life is filled in: dubious parentage, orphaned at 13, bullied at Eton, shanghaied in Penzance, discovery of a treasure map, caught in the time warp of the Bermuda triangle, left to die on a burning ship, rescued by Peter and their initial friendship. And, most importantly, his growing up and unassailable split with Pan.

Steven C. Kemp’s majestic shipboard set with its looming stern, detailed rigging, and solid mast looks most seaworthy. During the action, Smee unfurls a sail and it’s used as a projection screen. Richard Prouse’s puppets are pleasantly fanciful, while Jack Ivy’s atmospheric sound design laps against us with introductory sea shanties, rolling ocean waves, bombastic cannon shot, crocodile coos, or cavernous echoes. Though encased in costumer Katherine Snider’s dayglo croc outfit, the actor inside goes uncredited. Bad form, as Hook would say. On his exit, the unnamed actor gets a hearty round of applause from the appreciative audience.

In Pielmeier’s telling, Pan (an offstage voice) is a vindictive force of nature – egotistic, uncaring, amoral, sadistic – while Hook begins innocent then is beset by fate until revenge o’ertakes him and his path is set. If you believe in fairies and “flying sand” and rich provocative stories of daring-do (and don’t we all, a little?), Hook’s Tale with its vaudevillian villains, disquisitions on time, pet crocodile, and lets-put-on-a-show antics is a most diverting amusement for what can seem like our own end of times.

Let your own imagination run wild, as our not wholly unheroic figure says, but “put it in its proper place.” Mine is with me still, hanging above the desk in my office. Whenever I want to feel the intoxicating rush of youth, there he is, smiling at me with that devilish marionette grin. I don’t remember how to operate him anymore, but what adventures we once shared.

Hook’s Tale continues through October 17 at 7:30 p.m. Wednesdays and Thursdays; 8 p.m. Fridays and Saturdays; 2:30 p.m. Saturdays and Sundays at Stages, 800 Rosine.  All patrons must show a negative Covid-19 test or proof of vaccination prior to entry. Masks required. For more information, call 713-527-0123 or visit stagestheatre.com. $25-$79.
California Privacy Policy California Collection Notice
Do Not Sell My Info
Use of this website constitutes acceptance of our terms of use, our cookies policy, and our privacy policy The Houston Press may earn a portion of sales from products & services purchased through links on our site from our affiliate partners. ©2021 Houston Press, LP. All rights reserved.