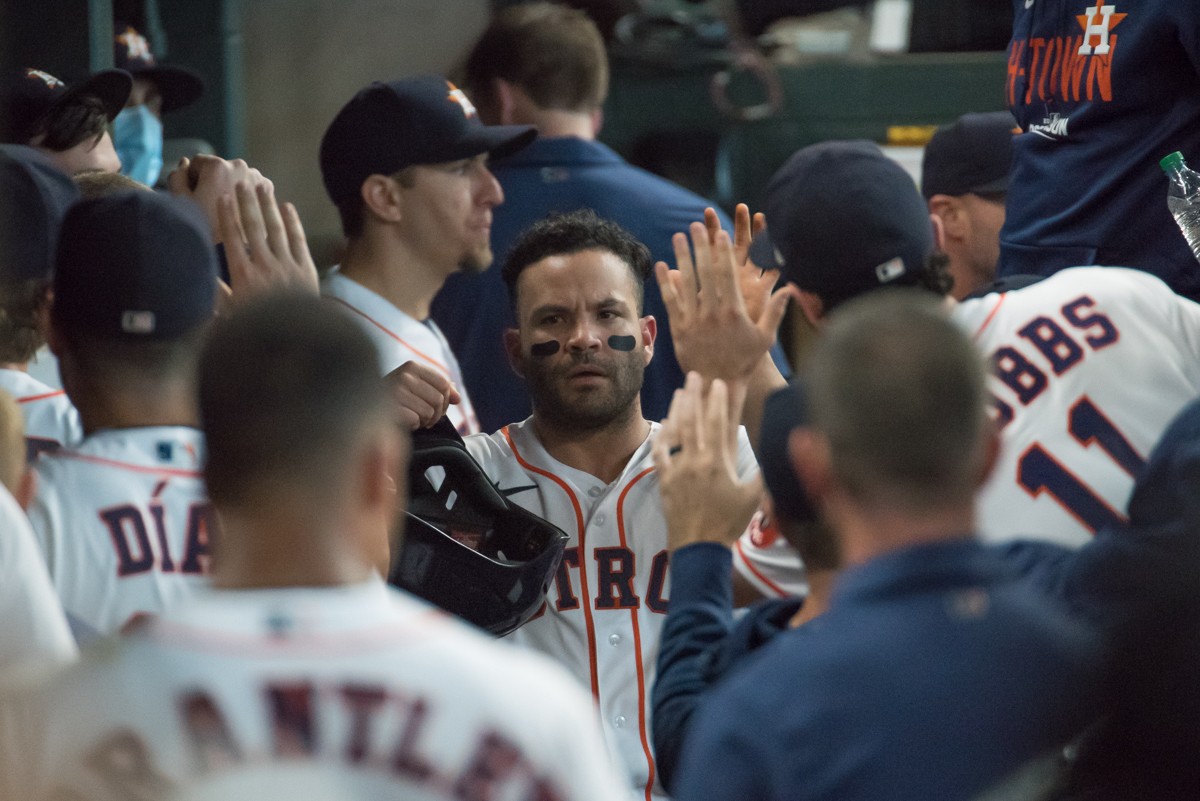 Photo by Jack Gorman
Jose Altuve capped off a huge offensive outing by the Astros with a three-run homer in the ninth.
The Astros became only the third team in MLB history to reach baseball's final four five consecutive times beating the White Sox 10-1 Tuesday in Chicago. After the Game 4 win, the Astros head home where they will host the American League Champion Series against the other Sox (the Red ones) starting this weekend.

Unlike Sunday when they got up 5-1 only to blow a lead and ultimately get blown out, Astros pitching was stout and their bats were typically resilient against arguably the best bullpen in the majors. The three-run homer by Jose Altuve in the top of the ninth was the capper in a series that saw the Astros average nearly eight runs per game in the series.

Before we start dissecting the next series, let's take a look at what happened Tuesday.

After the Astros Game 3 loss, White Sox reliever Ryan Tepeda suggested that the 'Stros struggled to hit away from Minute Maid Park because they lacked the advantage of stealing signs. Honestly, the media played it up more than the teams did, but this is not a team that you provoke. For an entire season, they've heard every insult and seen every flying inflatable trash can. They don't rattle. They only get even.

Up 2-1 in the fourth inning, Tucker singled and proceeded to steal two bases on consecutive pitches. Two batters later, Martin Maldonado got his first hit of the series to score Tucker and stretch the lead just a bit. Eventually, the roof would cave in on the White Sox, but it was a critical moment in what was, at that time, a close ballgame. In fact, the Astros stole four bases in the game, matching an all-time postseason high for a game.

Altuve gets the last laugh.

In the second inning, Jose Altuve was hit by a pitch. He mostly shrugged it off. Later in the game, Kendall Graveman hit Jose Abreu, the White Sox slugger on a pitch that clearly got away from him. Neither pitch was intentional, but when Abreu was plunked, Sox manager Tony LaRussa left the dugout for what seemed like several hours arguing the pitch was intentional. Both teams were warned and that was it. Until the ninth when Altuve, up against the best closer in baseball and a rather intimidating pitcher in Liam Hendricks, deposited a first pitch fastball well over the left field wall to put an exclamation point on a game that was already well in hand.

Baker has received plenty of criticism, much of it deserved, for his choices, particularly when it has come to handling the pitching staff. But, on Tuesday he was in total control, pulling Lance McCullers perhaps earlier than most thought for Yimi Garcia, who had struggled Sunday. It worked and the Astros rolled through scoreless inning after scoreless inning thereafter. Between that and the calls to steal so frequently against a team that is prone to giving up bases in a critical game four, the Astros skipper dialed up everything perfectly.
California Privacy Policy California Collection Notice
Do Not Sell My Info
Use of this website constitutes acceptance of our terms of use, our cookies policy, and our privacy policy The Houston Press may earn a portion of sales from products & services purchased through links on our site from our affiliate partners. ©2021 Houston Press, LP. All rights reserved.