Opinion: Why Biden Can’t be FDR 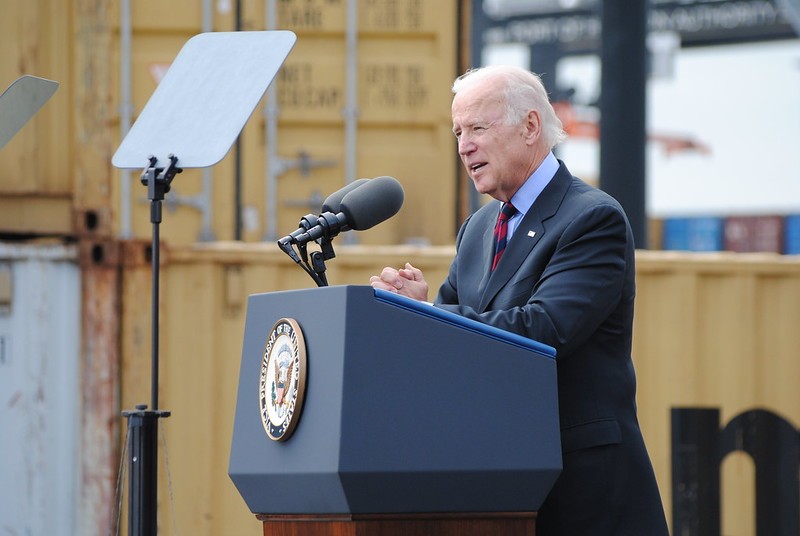 Photo by U.S. Army Corps of Engineers via Flickr
Then-Vice President Joe Biden visits the Port of Houston in 2013.
I say this with love, but sometimes the American Left is the biggest collection of miserable bastards on the planet. Joe Biden’s approval numbers have fallen lower than any president since polling began with the exception of Donald Trump. The loss of the governor’s race in Virginia seems to spell doom for the upcoming midterms. There is this omnipresent cloud of malaise that hangs in the air.

That atmosphere tends to bring out the stormcrows and lathspells who believe that the current impasses in Congress over Biden’s Build Back Better agenda are a result of intentional sabotage rather than the democratic system at work. I’ve seen people claim that, if he but wanted to enough, Biden could forgive all student loan debt, institute Medicare for All, legalize cannabis, and otherwise use executive action to fix any number of problems. Something (always unspecified but totally possible) must be done!

Unfortunately, the busted bumper car rally that we’re seeing is exactly how the system works, and what’s more, it’s necessary.

People without a lot of historical knowledge try to compare Biden’s Build Back Better framework to Franklin Roosevelt’s New Deal, the collection of legislation that ushered in massive social change and ended the Great Depression. As we wallow here in the shallow end of the COVID pandemic and the toxic ooze that is late-stage capitalism, it’s perfectly understandable to want the modern equivalent of FDR’s dream to make things better. The Democrats control both houses of Congress, so why can’t we?

Biden cannot be FDR, though. The circumstances of the moment will simply not allow that.

“Congress virtually abdicated its constitutional responsibility to make laws,” says historian Richard Shenkman in Presidential Ambition. “In those first hundred days, it was Roosevelt who made the laws. His people drafted the bills, and Congress passed them, the members often not even bothering to read them through.”

FDR also had majorities in both houses of Congress, but unlike now there wasn’t automatic opposition from Republicans. Take one of his most famous endeavors, the Civilian Conservation Corps which employed thousands of people on public works projects. Roosevelt submitted his idea on March 21, and it was passed by a voice vote just ten days later. That sort of partnership in crisis is unthinkable from Republicans right now, having happily weaponized this dark time to the point our own Sen. Ted Cruz is apparently mad at Big Bird for encouraging kids to get vaccinated.

It’s unreasonable to hold Biden to the standards of a government that operated under very different rules. He cannot magic legislation into being the way FDR did because Congress will not let him. Every single Republican will stand against any major legislation except basic, physical infrastructure, and the Democrats are hamstrung by their two most conservative members, Sens. Joe Manchin (WV) and Kyrsten Sinema (AZ).

The way that Manchin and Sinema have whittled down the Build Back Better act is nauseating. Gone is the free community college, paid family leave, a lot of taxes on the wealthy, and other things that would have objectively made America a nicer place to live. Biden is held responsible for the bloodletting of his plan.

Unfortunately, there is nothing to be done. Manchin and Sinema are well within their rights as senators to oppose legislation, and there is little Biden can do but plead with them. That sucks, but it’s worth mentioning that this process was a godsend in 2017 when the Republicans were attempting to repeal the Affordable Care Act. Don’t you think the Republicans were tearing their hair out then at having their favorite bad idea derailed by a few hesitant members?

I know that these impasses are frustrating. The end seems very bloody nigh, and the grand social anxiety makes us all want to shake our president and scream. The fact is, he can’t overrule Congress, and he shouldn’t. The last half century has seen a steady transfer of power from the legislative branch to the executive, and it was just earlier this year where we saw how that leads to an attempted overthrow of democracy. What stopped it was the fact that the power in America is separated and checked.

That is an obstacle to progress, but it’s also a safeguard from dictatorship. Roosevelt is probably the closest America has ever come to having an out and out tyrant. That worked out well for some (white men who needed jobs) and disastrously for others (Japanese families). It’s not an experiment we should ever try again. We just got out of a time where Congress was barely able to constrain a fascist authoritarian end to the American experiment. The answer to our problems is not to hand that sort of power to a Democrat, no matter how compassionately he might wield it.

More than “getting things done,” we need to rebuild the wall between what a president can and can’t do. Especially if the entire left is going to play at being emo teenagers and sit out the midterms in a depressed fugue. Biden’s Build Back Better may end up being a shadow of its potential glory, but I’d still rather have a Congress that checks the president than one which hands him a blank slate.
California Privacy Policy California Collection Notice
Do Not Sell My Info
Use of this website constitutes acceptance of our terms of use, our cookies policy, and our privacy policy The Houston Press may earn a portion of sales from products & services purchased through links on our site from our affiliate partners. ©2022 Houston Press, LP. All rights reserved.