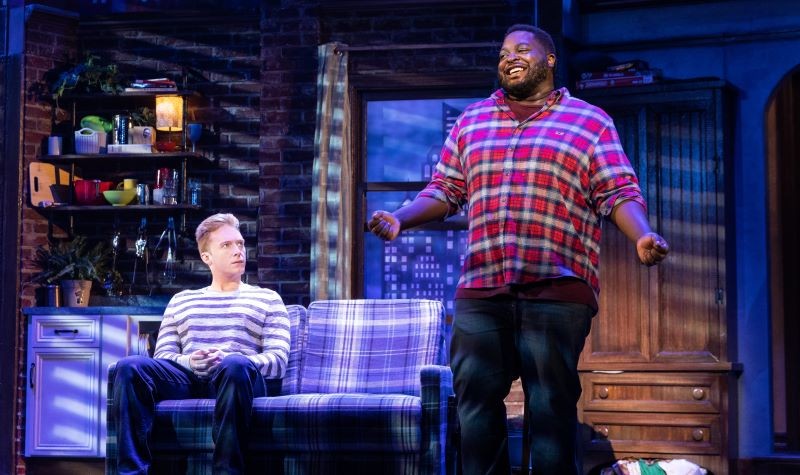 Photo by Evan Zimmerman for MurphyMade
Drew Becker as Michael Dorsey and Jared David Michael Grant as Jeff Slater in the National Tour of Tootsie.
Drew Becker originally auditioned more than a year ago to be part of the ensemble for the national tour of the Tony Award winning Tootsie, the musical based on the movie by the same name. But when he got call backs for the casting director it was to read the lead character's lines and songs.

Now the not-that-far-from-college-years Becker is starring at Michael Dorsey/Dorothy Michaels in the much anticipated Broadway Across America production about the flailing actor who dresses as a woman to get roles.

And in the process becoming ever more accomplished at changing in and out of stage costumes in a matter of seconds. "Most times I leave the stage I am going into a quick change.  I have a team of people offstage always waiting to help me through the changes. Also the costumes are all built to go through those quick changes. The very first change I have into Dorothy is about 45 seconds long.

"So it's fast, but I don't have to go it alone," he says. At the same time, he, like other performers, is protecting himself surrounded by rigid COVID-19 protocols in rehearsals, masking backstage and constant testing.

He credits his breakthrough opportunity with right time, right place and the help of his agent. "Timing and luck were a big part of it with everything opening back up because of COVID," says Becker. "I especially wanted to be a part of this because it's a big comedy musical and I think it's really important for people to be able to come into the theater again and to laugh. I love the story. The lesson that is learned from Michael and the message that the show has is really relevant."

Besides adding music, the stage production of Tootsie differs from the 1982 movie starring Dustin Hoffman and Jessica Lange, in that it's been moved to modern day and Michael/Dorothy doesn't land a role on a soap opera, but a Broadway musical — which makes the introduction of songs all the easier, Becker says. Becker, obviously, is much younger than Hoffman was when he took on the character but the young actor credits the make-up and costume designers with helping him make it work on stage.

"We still have the heart and the soul of the movie and the funny nature the movie has but we also, a lot of the characters have been updated. For instance the character of Max in the film is more of an older, sleazy co-star on the opera but in our show he is a young stud who is fresh off the TV reality show Race to Bachelor Island, So how that character is written is very different from the film."

In the almost 40 years since the movie was made there have also been changes in sensitivities in regards to gender, and how some of the characters are portrayed, Becker says.

Becker grew up outside of Gettysburg, PA, starting in theater when he was in fifth grade. By high school he says he knew he wanted to make a career of it and plunged in wholeheartedly. "I never really had a Plan B because I wanted to be all in on this," he says. "I fell in love with telling stories."

In his first national tour, Becker, who went on to graduate from the Shenandoh Conservatory in Virginia, says not only is he traveling for the first time but experiencing script changes. "As for learning the show it was just like any other rehearsal process aside from the fact that we were doing rewrites and I've never been part of a show where I've had to get new dialog, which was really cool. It was great for us as a cast to be part of that process and to have a voice in some of the rewrites that we made in the Broadway transfer."

Audience members "are going to have an absolute blast," Becker predicts."After not having theater for so long and coming back with this show, a little bit of laughter is going to be necessary for us all to connect again. And I think that comedy is the best way for us all to unite again in one space."

Performances are scheduled for November 16-21 at 7:30 p.m. Tuesday through Thursday and Sunday, 8 p.m. Friday and Saturday and 2 p.m. Saturday and Sunday at the Hobby Center, 800 Bagby. Masks covering the nose and mouth are required as is proof of vaccination or a negative COVID-19 test taken within 72 hours or a negative antigen test taken six hours prior. For more information, call 800-982-2787 or visit TheHobbyCenter.org or BroadwayAtTheHobbyCenter.com.  $35-$125.
California Privacy Policy California Collection Notice
Do Not Sell My Info
Use of this website constitutes acceptance of our terms of use, our cookies policy, and our privacy policy The Houston Press may earn a portion of sales from products & services purchased through links on our site from our affiliate partners. ©2022 Houston Press, LP. All rights reserved.