Best Bets: 4.48 Psychosis, Terra Firma, and A Dust in Time 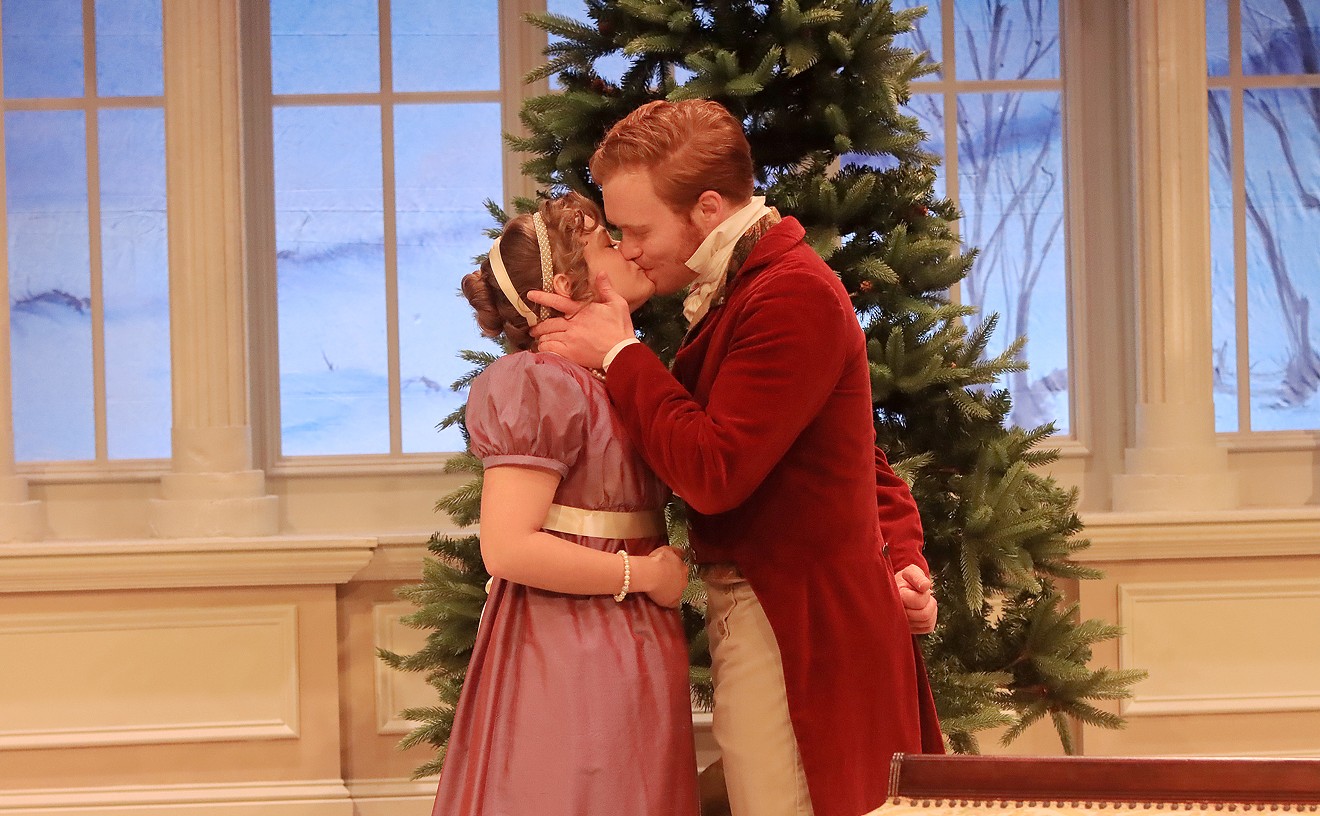 Photo by Pin Lim / Forest Photography
B. Connor Flynn and Skyler Sinclair as Mr. and Mrs. Darcy in Miss Bennet: Christmas at Pemberley at Main Street Theater.
If you hadn’t noticed that the holiday season has officially arrived, you can certainly tell from this week’s list of best bets. A couple of the city’s seasonal staples are finding their place on Houston stages this week (with more to come soon), along with new offerings and just a bit of counterprogramming, too. Keep reading to see our picks for the best ways to spend your time this coming week.

In 1970, The Jackson 5 released Jackson 5 Christmas, a holiday album one reviewer called “a potent distillation of the spirit of Christmas, an album joyful enough to make me feel like it’s the most wonderful time of the year rather than merely telling me so.” You can find some of that contagious holiday spirit on Thursday, November 18, at 7:30 p.m. when the Ensemble Theatre opens an adaptation of Nate Jacobs’s A Motown Christmas. The musical revue, directed by guest director and choreographer Keith Tyrone, features music from The Jackson 5, The Supremes, Stevie Wonder, and Gladys Night and the Pips. Performances continue through December 26 with shows scheduled for Thursdays at 7:30 p.m., Fridays at 8 p.m., Saturdays at 2 and 8 p.m., and Sundays at 3 p.m. Tickets can be purchased here for $46 to $70.
Back in October, the Museum of Fine Arts, Houston, opened a new exhibition, “Afro-Atlantic Histories.” Now, the museum will open a film series inspired by the exhibition with the world premiere of Brazilian filmmaker Elisa Herrmann’s Umbanda: Offerings of Faith. Invented in Rio de Janeiro in the early 1900s, Umbanda is a religion with roots in African, European, and Indigenous belief systems, with “its own holy figures, such as Preto Velho, or ‘Old Black Man,’ a wily old slave figure who smokes a pipe.” Screenings are scheduled for Friday, November 19, at 7 p.m. and Saturday, November 20, at 2 p.m. and Herrmann will be present. You can choose a date and purchase tickets for $7 to $9. Following Saturday’s screening, audience members can also go on a guided tour of the Afro-Atlantic Histories exhibition. The Afro-Atlantic Histories film series continues through January 9.

ROCO continues their Connections series at Asia Society Texas Center on Friday, November 19, at 7 p.m. with a string quartet performance of Huang Ruo’s A Dust in Time. ROCO founder and artistic director (and principal oboist) Alecia Lawyer recently told the Houston Press she viewed the performance “as a meditation and a journey,” noting that during the performance a mandala – “a symbolic diagram used in the performance of sacred rites and as an instrument of meditation” – will be drawn and then erased. It will represent the journey “from nothingness into fullness and back into nothingness.” There will be a wine reception and tour of the galleries at 7 p.m. with the performance following at 7:30 p.m. The performance will also be livestreamed on ROCO’s website, Facebook page, and YouTube channel.

David Rainey returns as Scrooge in the Alley Theatre production of A Christmas Carol.
Photo by John Carrithers
You can once again make your way to the Alley Theatre for their annual production of A Christmas Carol starting this Friday, November 19, at 7:30 p.m. This year, they’ll again stage the Doris Baizley adaptation that was first performed digitally last season, a play-within-a-play which finds a short-staffed troupe of actors trying to perform the Charles Dickens classic. Director Brandon Weinbrenner told the Houston Press that the production focuses more on "joy and redemption," and yes, David Rainey will return to the role of Scrooge, who the Wall Street Journal noted gave “a splendidly pungent, even salty performance” last year. A Christmas Carol will be performed at 7:30 p.m. Tuesdays through Sundays and 2:30 p.m. Saturdays and Sundays (with additional matinees and no Thanksgiving Day show) through December 29. You can view the full schedule here, as well as purchase tickets for $28 to $121.

In 2011, The New Yorker noted that Hélène Grimaud “doesn’t sound like most pianists,” calling her “a rubato artist, a reinventor of phrasings, a taker of chances.” They also stated that “in the concert hall Grimaud can offer surprises,” so you won’t want to miss it when the Houston Symphony welcomes the French pianist this weekend to play Maurice Ravel’s Concerto in G. The program, titled Hélène Grimaud Plays Ravel, also includes Ravel’s Rapsodie espagnole, Claude Debussy’s “Ibéria,” and Unsuk Chin’s Graffiti, which will be paired with a video by Alex Luster featuring Houston street art. The concert will be performed in-person at Jones Hall at 8 p.m. Friday, November 19, and Saturday, November 20, and at 2:30 p.m. on Sunday, November 21. You can purchase tickets here for $29 to $119. Or you can nab a ticket to the livestream of Saturday night's performance here for $20.


The Catastrophic Theatre opens their 2021-2022 season, a return to in-person performance, on Friday, November 19, at 8 p.m. when they open a production of Sarah Kane’s 4.48 Psychosis. Catastrophic co-founder Jason Nodler will direct the play, “a sequence of elliptical fragments, fractured and emotionally lacerating,” that are “set in a netherworld populated by characters without set identities.” Exploring depression and suicide, it visits “a mind in the throes of breakdown, raging against doctors who do not (or will not) understand.” Performances are scheduled for 7:30 p.m. Thursdays, 8 p.m. Fridays and Saturdays, and 2:30 p.m. Sundays through December 12 at The MATCH. Tickets are pay what you can with a suggested price of $35 and can be purchased here.

If you were paying attention on March 11 of this year, you may have noticed that the Doodle on the Google homepage was Astor Piazzolla, so chosen in honor of the Argentine composer's 100th birthday. On Saturday, November 20, at 7:30 p.m. Apollo Chamber Players will celebrate the creator of nuevo tango at The MATCH with Piazzolla Centennial, a performance that not only includes Piazzolla’s Tango Ballet on the program, but also two world premieres: one from Adolphus Hailstork and one from Latin Grammy winner Hector del Curto, which is aptly written for bandoneon and string quartet. Note there will be a Q&A prior to the performance at 7 p.m. You can purchase tickets here for $10 to $35 ($40 at the door).

On Saturday, November 20, at 7:30 p.m. Houston Contemporary Dance Company will visit The Hobby Center for the Performing Arts to perform their latest program, titled Terra Firma. The program includes a world premiere from Joe Celej titled “Intersections,” which is comprised of four movements that can be performed in any order; Keerati Jinakunwiphat’s “Viola,” featuring music by composers like Benjamin Britten and Philip Glass performed live by special guests KINETIC; a duet called “I Give Myself” by Christian Denice; and Margot Gelber’s “Only What You Take With You,” a solo piece set to be danced by HCDC’s resident choreographer Robbie Moore. KINETIC will also perform “Break Away,” a string quartet by Jessie Montgomery. Orchestra seats are still available here for $20 to $50.

In a welcome sign of the times – or should we say season – Miss Bennet: Christmas at Pemberley is back at Main Street Theater. On Saturday, November 20, at 7:30 p.m. Main Street will open a new production of Lauren Gunderson and Margot Melcon’s Pride and Prejudice sequel, which reunites the Bennet sisters at Darcy and Elizabeth’s estate and puts a special focus on middle Bennet sister Mary. Actor Chaney Moore recently told the Houston Press that “Gunderson kept all of the charm that Jane Austen created and was able to encapsulate that and put it into her work.” You can catch Miss Bennet: Christmas at Pemberley on Thursday through Saturday nights at 7:30 p.m. and Sunday afternoons at 3 p.m. through December 19. (No show on Thanksgiving Thursday, but an extra one on Wednesday, November 24.) You can purchases tickets here for $36 to $55. There’s also a plan to stream the show in December, so keep an eye on Main Street’s website for more information.
California Privacy Policy California Collection Notice
Do Not Sell My Info
Use of this website constitutes acceptance of our terms of use, our cookies policy, and our privacy policy The Houston Press may earn a portion of sales from products & services purchased through links on our site from our affiliate partners. ©2021 Houston Press, LP. All rights reserved.