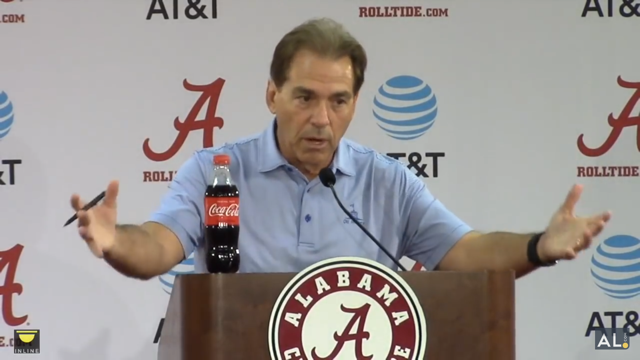 Nick Saban and Alabama control their own destiny to the College Football Playoff.
Screen grab from YouTube
I will admit that I predicted one of the byproducts of COVID for the 2020 season in football, and its economic impact on collegiate athletics programs during the pandemic year, was that we would see an expanded College Football Playoff. With more playoff games came more money, so an expansion, even a temporary one year expansion, from four to eight or 12 participants made logical sense.

It never happened, but what DID happen this past spring was a ton of chatter, and subsequently actually meetings and straw polls from athletics leadership, about expanding to a 12-team playoff. When Texans and Oklahoma announced this summer they'd be leaving the Big XII for the SEC, that seemed to shock everyone into hitting PAUSE on playoff expansion, for now.

So for at least a few more years, it looks like I will get my way. Four teams, and lots of debate, and tons of anger. We are in the homestretch for 2021, and as off Tuesday night, heading into the last two weeks of the regular season, here are the latest College Football Playoff rankings:

These rankings will determine more than just the four team playoff, as the other New Year's Six Bowls are largely determined by the committee's views of who's deserving and who's not. However, the playoff is the big thing, and as of Wednesday morning, there are ten teams still left with a College Football Playoff pulse. Some have the heart rate of a marathon runner, and others are on life support, but as of right now, here is what the remaining field looks like, along with their betting odds, courtesy of betonline.ag:

CONTROLS THEIR OWN DESTINY

GEORGIA  4/5
Remaining Schedule: 11/27 at Georgia Tech, 12/4 vs Alabama (SEC Title Game)
Notre Dame beat Georgia Tech 55-0 this past weekend, so I can only imagine what type of dismemberment the Bulldogs will inflict on Tech. Is it possible to hold a team to negative points on offense? Alabama and Georgia in the SEC Title game should be epic. My guess here is that Georgia has all but clinched a spot in the playoff, regardless of the SEC Title Game outcome.

OHIO STATE  3/1
Remaining Schedule: 11/27 at Michigan, 12/4 Big Ten Title Game (possible)
Ohio State's loss early in the season at home to Oregon is an afterthought now. This Buckeye team looks like the ones of the last decade or so, with a high flying offense, and the defense has improved from some horrific games early in the season. The Michigan game is basically a quarterfinal game, and if the Buckeyes win, they'll be a heavy favorite over whichever team comes out of the Big Ten West in the conference title game.

ALABAMA  4/1
Remaining Schedule: 11/27 at Auburn, 12/4 vs Georgia (SEG Title Game)
Alabama has a tough slate the final two games, as Auburn has improved since early in the season, and the Iron Bowl will be in Auburn. Despite being a likely favorite (and in most cases, a heavy one) over everyone but Georgia on a neutral field, the Tide can't afford a second loss.

MICHIGAN 40/1
Remaining Schedule: 11/27 vs Ohio State, 12/4 Big Ten Title Game (possible)
Don't look now, but Michigan has survived its loss to Michigan State, and at this late stage, if they win out, they should be in the playoff for the first time Since Jim Harbaugh took this coaching job in 2015. Hosting Ohio State on Saturday, as opposed to traveling to Columbus, will help.

ONE OF THESE WILL MAKE IT

CINCINNATI  22/1
Remaining Schedule: 11/26 at East Carolina, 12/4 vs Houston in AAC Title Game
This is the best chance an undefeated Group of Five team has had at making the playoff in the eight year history of the four team format. The Coogs will have something to say about it in the AAC Title Game. Right now, Cincinnati's win over Notre Dame is looking like one of the most important head to head games of the season, considering.....

NOTRE DAME  33/1
Remaining Schedule: 11/27 at Stanford
.... the Irish have managed to hang around and put themselves in the playoff conversation again, after having made it in 2018 and 2020 with undefeated regular seasons. Their only loss this season is that home loss to Cincy, and the Irish should roll Stanford this weekend to get to 11-1. The problem for the Irish will be the winner of the game between these two teams....

PRAYING FOR A MIRACLE

PITTSBURGH  200/1
Remaining Schedule: 11/27 at Syracuse, 12/4 ACC Title Game
UTAH  200/1
Remaining Schedule: 11/26 vs Colorado, 12/3 PAC-12 Title Game
It's weird seeing a College Football Playoff odds board without Clemson anywhere, but that's the weirdness of the ACC in 2021. Pitt would need about 25 things to happen to get into the playoff, and Utah might need more than that, but as long as there is a pulse, they will get their 200/1 odds.

MICHIGAN STATE
Parting Performance: 56-7 LOSS to Ohio State
Michigan State went from "controls their own destiny" to "dead on arrival" in about one quarter of football on Saturday against Ohio State. To add insult to injury, they began working on a $95 million extension for their head coach Mel Tucker prior to the loss to the Buckeyes. Good luck with that, Sparty!

OREGON
Parting Performance: 38-7 LOSS to Utah
Oregon peaked in that win over Ohio State in September. Peaking in September is not ideal in the world of college football.

WAKE FOREST
Parting Performance: 48-27 LOSS to Clemson
This was a cute story, these Demon Deacons, but you have to actually be able to play some semblance of defense to remain in playoff conversations. Normally, giving up 48 points to Clemson would be excusable, but this Clemson team stinks offensively. Bye bye, Wake.