9 Things in Houston Sports to Be Thankful For

Screenshot
The record is bleak, but the Rockets young talent should have fans all smiles.
The Astros are done for the year. The Rockets are in the midst of one of the worst losing streaks...since last season (ugh). And the Texans won a game, but it was only the second win of the season. It seems as if what was a few years ago thought to be the golden age of Houston sports has fallen deeply into the proverbial crapper. Fortunes have a way of changing like that, particularly in our city.

Despite all the (sports) hardship, there is still plenty to be thankful for. You might have to squint to see it, but it's there.

The Rockets two first round picks have had varying degrees of success thus far. Both just 19, it's not surprising they would have flashes of brilliance mixed with wild flings of inconsistency. Green probably flirts with both ends of the spectrum the most. He will have big games with highlight-reel dunks and step back threes. But, in the same game, he might turn the ball over seven times and look physically overmatched.

Sengun has shown more consistency with a game that was honed for years against adults in the Turkish leagues. His passing, in particular, has been a bright spot and it's just a matter of time before he will shoot the three at a higher clip. But, like any 19-year-old rookie, he's going to have his struggles. Regardless, both are bright spots in an otherwise dim 2021-22 season for this team.


The Rockets still have a boatload of draft picks.

Only the Oklahoma City Thunder have more draft picks in upcoming years and if 2021 was any indication, GM Rafael Stone will know how to use them effectively. Not only with the next year or two likely delivering more young talent, but through trades as the team gets better. It has been a fast and precipitous fall for a team that was a perennial contender just a couple seasons ago, but it has the potential to pay off with time and patience. 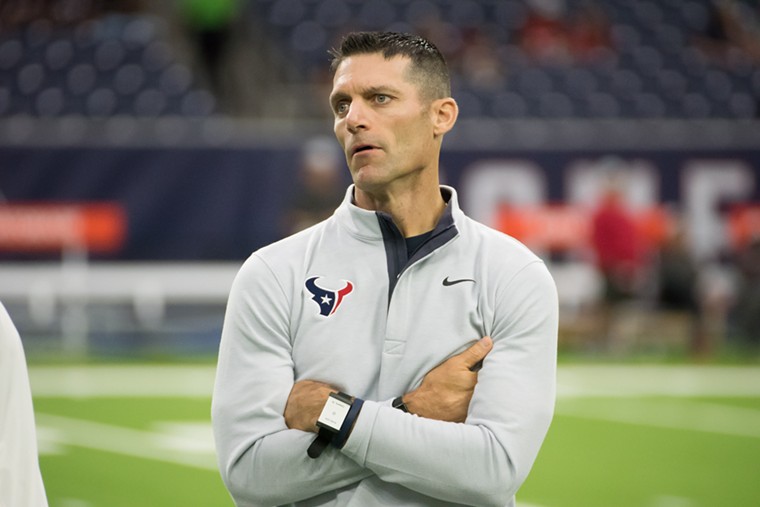 Nick Caserio has his work cut out for him, but at least he has a plan.
Photo by Jack Gorman
The Texans won a game in Tennessee.

Sure, it was only the second time this year, but it was against the former Oilers in Nashville, perhaps the best place to score a win even in a down season. There aren't a lot of bright spots for the Texans this season. It feels a lot like a transitional year between the shedding of who they were almost completely over the last year and the building toward who they will become. In years like this, small victories are important and a win on the road against a division rival certainly qualifies.

With cap flexibility and the draft, the Texans could rebuild.

GM Nick Caserio obviously has his hands full, but it does appear he has a plan. The team is loaded with veterans on one-year deals (if you don't count the one albatross contract at quarterback) and is poised to have quality draft picks this offseason and perhaps the following depending on what happens with the aforementioned "he who shall not be named" QB. It's a big ask of fans to be patient with a team that has given them no reason for that in its entire history, but hope is all we've got at this point.

College basketball doesn't typically generate much interest around here prior to March Madness, but if you are a fan of hoops and winning (sorry Rockets), you might want to turn your attention to the Fertitta Center on the University of Houston campus. The Coogs have only lost once and look impressive in early-season play. After reaching the Final Four last season before falling to eventual title winner Baylor, Coach Kelvin Sampson has built what appears to be another contending team with tenacious defense and high energy. Even if you don't follow college basketball (and who does in Houston?), this team is worth checking out. 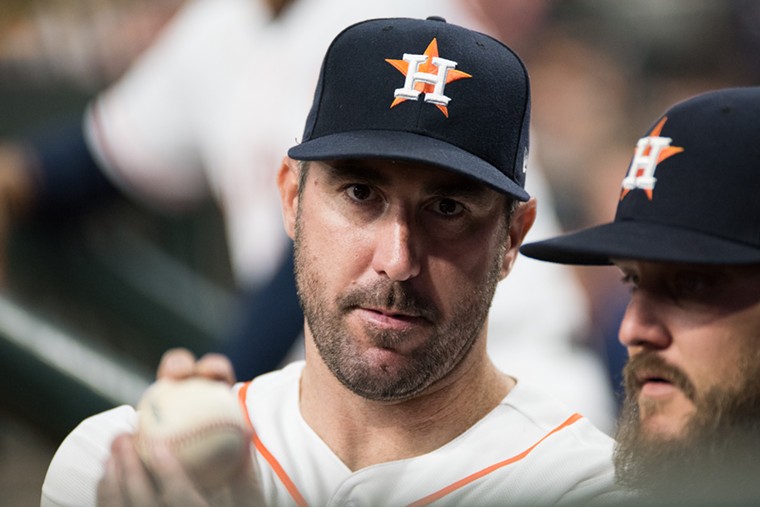 Justin Verlander is back, baby.
Photo by Jack Gorman
The Astros core, even without Carlos Correa, is strong.

There will be much weeping and gnashing of teeth the day the team's superstar shortstop finally signs with another team. That is the unfortunate reality facing Astros fans this offseason. But before you go completely apoplectic, try to remember this team also has Kyle Tucker and Yordan Alvarez and Alex Bregman. They have a wealth of young talented arms in the rotation and bullpen. This is all in addition to the quality minor league prospects in their farm system. Losing Correa is going to hurt, we won't lie. But, thanks to careful roster building by GM James Click (and his predecessor), all is not lost. And...

Justin Verlander is back.

Against seemingly all odds, the Astros ace re-signed with the team helping to add veteran leadership and a still feisty arm to the rotation. Verlander was clocked throwing in the mid and upper 90s at a recent workout, which is what had many around baseball speculating he would sign with the Yankees or some other larger market team. Instead, after nearly two years out after Tommy John surgery, JV is back in Houston and it feels so good.

The long winter isn't as tough in Houston with our milder climate and lack of snow (most years), but without quality sports, it can still feel like a slog. Fortunately, you won't have to wait long for a winning team to be back at it. Between now and then, you've got the holidays! So, chin up there, Houston sports fan. It's not all bad.
California Privacy Policy California Collection Notice
Do Not Sell My Info
Use of this website constitutes acceptance of our terms of use, our cookies policy, and our privacy policy The Houston Press may earn a portion of sales from products & services purchased through links on our site from our affiliate partners. ©2021 Houston Press, LP. All rights reserved.