Photo by Bear Hands Media
Alicia's has five locations with tamales for the holidays.
Houston loves its tamales. The corn masa treat has been around for thousands of years in some form or other and originated in Mesoamerica.

However, a Google search on the origins of The Great Tamal can lead one down the rabbit of hole of when and where it first originated. Many people believe it was first eaten by the Aztecs and that seems as good an origin story as any so we'll stick with that. What most culinary historians and anthropologists do agree on is the fact that it was thousands of years ago in the BC.

In the AD, it became a Christmas tradition for many Mexican families and tamaladas have become an important part of the holiday season for loved ones to come together, with families being very stringent in the fillings and preparations that make the holiday fare their own.

However, making tamales is no easy task and many of us don't have abuelitas and tias to school us in the technique. Fortunately, we live in a city with a large Hispanic population, hundreds of Mexican restaurants and taquerias galore. Because of its seasonal popularity, the acquisition of enough tamales to feed a crowd can be difficult and the dreaded Sold Out sign is not uncommon. We recommend that tamal epicures put their orders in early or pick up a few dozen to freeze. Having a freezerful of golden tamales is a happy thing when dinner needs to be quick and easy.

We have a list of places, some fancy, some modest, that have tamales of various types and price ranges. Whether you like them skinny or fat, with spicy pork or shredded beef, there's a tamal on this list that will please everyone.

This tamale restaurant routinely gets voted "Best Tamales in Houston" by a number of publications and customers have a choice between handmade and machine-made. Also called The Original Alamo Tamales, the company has been around for nearly six decades, though it closed its Navigation store in 2019. Its popularity stems from the fact that the tamale factory grinds its spices from whole, adding extra fragrance to the tamales themselves.

Guests can choose from beef, chicken, spicy pork, cheese, bean and spinach. The handmade tamales are $15.99 to $16.99 and the machine-made ones are $9.99 per dozen, a good deal considering the rising cost of this corn masa delicacy elsewhere.

This family-owned restaurant is offering its handmade tamales by the dozen, served with its signature sauces. The Chicken Tamales come with green salsa, the Pork with red salsa and the Con Rajas Tamales are a vegetarian option with poblano pepper and cheese. The tamales are $9.95 for six and $17.95 per dozen. They will be available through December 31 so they make a great snack for New Year's Eve. Orders must be made 24 hours in advance.

Its sister restaurant, Galiana's, 24110 Northwest Freeway, is offering the same tamales at its location in Cypress.

Picos' Tamale Stand is back for the season.
Photo by Michael Anthony
This longtime Houston Mexican restaurant rolled out its tamale stand November 17 and its loyal fans have till January 8 to indulge in its versions, sweet and savory. The variety highlights different regions of Mexico with banana leaf-wrapped Tamales Oaxaquenos made with pork, chicken, vegetables, turkey or shrimp for $10.50 per half dozen, $21 per dozen. The corn-husked wrapped Tamales Nortenos have a wide choice of fillings including chicken, beef, pork, cheese, black beans, raisins, pineapple or coconut. The Nortenos are $21 for six and $42 for twelve.

It is also offering two dessert flavors like the Chocolate Tamal and the Tamal de Elote. Both are gluten-free.

This local Mexican restaurant is consistent with its skinny tamales by the dozen and has been a favorite for Cypress area residents from its beginnings on Grant Road to its relocation down the street on Jones. It sells tamales by the dozen for $15, a recent hike from its previous cost in the $10 range. Blame it on inflation but it's going to cost a bit more to feed the family tamales this holiday season. Tamales are available in chicken, beef and pork. The beef and pork can be ordered spicy as well.

Hugo Ortega has tamales at several of his restaurants around Houston.
Photo by Paula Murphy
Caracol
2200 Post Oak
713-622-9996
caracol.net

Hugo Ortega's Galleria-area restaurant is offering several varieties of tamales for $24 per dozen. The puerco is pork with mole coloradito and the chicken is made with salsa costena, a tomatillo and chili pepper sauce. There's also the hongos, a mushroom tamal with pipian rojo, a creamy red sauce made with pumpkin seeds.

A tried and true Texas favorite, Goode Co., has tamales for the holidays.
Photo by Goode Company
Both the Memorial and The Woodlands locations are offering pork tamales for $25 per dozen or $13 for a half dozen. Guests should call ahead for pick up at the restaurant.

Ortega's namesake restaurant is also offering tamales for $24 a dozen and are available for online ordering. There are two pork offerings: pork cochinita or chile puya. The chicken version is made with mole poblano. The hongas version at Caracol is available here as well plus there are the pescado tamales, made with fish and salsa Veracruzana.

Tacos and tamales get the barbecue treatment at JQ's.
Photo by David Leftwich
This pop-up will hopefully have a brick and mortar someday soon but until then, Houstonians are going to have to follow its social media for pop-up locations and dates. While its smoked brisket birria tacos get the folks at Texas Monthly excited, owners Joseph Quellar and Cindy Conde are very busy this season making thousands of tamales to fill the holiday orders. However, online orders must be in by December 17.

JQ's will be at Urban South Brewing, 1201 Oliver, December 18 and will have its first round of orders ready after 5 p.m. It will also have orders for pick up December 24. The brisket or pork tamales are $24 per dozen and the bean and cheese are $20.

Maize uses traditional masa for its tamales.
Photo by Becca Wright
We'll be honest. This restaurant recently opened softly December 1 and we haven't had the chance to taste its cuisine or its tamales. However, just knowing that chef/owner Fabian Saldana is in the kitchen and that Mark Cox, formerly of Mark's American Cuisine and Carmelo Mauro, former owner of Carmelo's Ristorante Italiano, are involved is reassurance enough that the tamales on offer will be authentic and delicious.

Maize is offering three classic variations. The Rajas Tamales are made with queso fresco and the Pork Tamales are served with adobo rojo. There's also Chicken Tamales with salsa de tomate. In keeping with Saldana's commitment to authentic Mexican ingredients, the tamales are made with nixtamalized masa which is ground on site. They can be ordered by the half dozen for $12 or the dozen for $24. The last day to order is December 23 and the last day for pick-up is December 24 but you might want to get them a little earlier than that. The orders must be made at least 24 hours in advance. 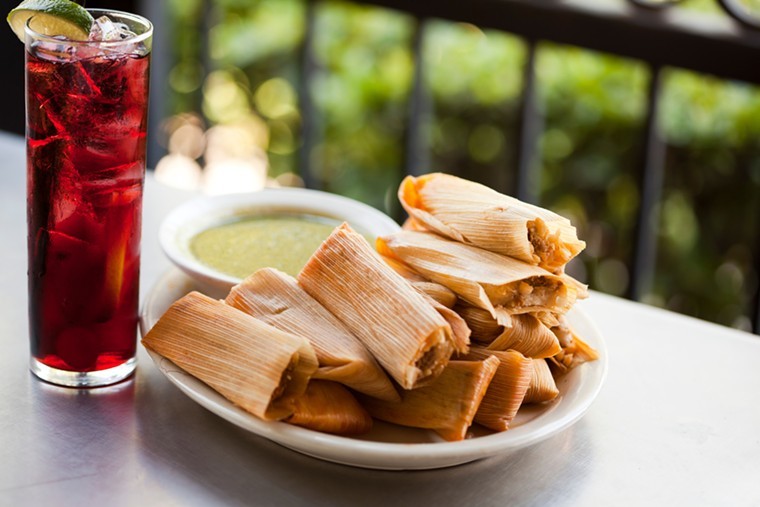 Molina's pork tamales are a special price for the holidays.
Photo by Julie Soefer
This family-owned Mexican restaurant has been in Houston since 1941 so you can bet they know how to make a good tamale. Here, it's pork laced with chili and wrapped in corn husks. It's also one of the better deals on tamales this season, going for $11.95 a dozen. Orders can be made online or in person. We suggest you add a half-pint, pint or quart of its famous Jose's Dip as a side snack. For those hosting a holiday party, this queso dip topped with spiced taco meat is a crowd pleaser.

While this tamale shop has a storefront in Bellaire where customers can pick up tamales, its also has ten farmers market pick-up spots at various times during the week and weekend. Urban Harvest, 2752 Buffalo Speedway, is one of its busier spots but it also sets up at the Tomball Farmers Market and ones in Cypress, Richmond and Fulshear as well.

The tamales are available in pork, chicken, jalapeno and cheese, spinach and cheese, black bean and cheese for $8 per half dozen and $14 for a dozen. Customers can get a mix for $15 per dozen. It has convenient online ordering.

Get jolly with Javi's tamales.
Photo by Julie Soefer
Chris Shepherd's Underbelly Hospitality is selling Javi's Tamales from Underbelly's butcher Javi Salvador. The spicy pork tamales are $26 per dozen and can be ordered online by December 21 for  pick up December 23 at One Fifth. Salsa included.

Buy a dozen or make a dozen at Sylvia's.
Photo by Paula Murphy
Owner Sylvia Casares is known as Houston's Enchilada Queen but the tamales at Sylvia's are top notch as well. Through the rest of the season, customers may order chicken or pork tamales at either location for pick-up for $22 per dozen, with a 24-hour notice.

For those who don't have an invitation to a tamalada this year, Sylvia's is hosting one December 23 from 2 p.m. to 4 p.m. at the Eldridge location. Casares will be teaching attendees the art of tamal making and the tamales will be packaged to take home after the event.

The cost is $65 per person but there is an extra charge depending on the number of tamales (minimum one dozen per person). Both locations offer opportunities for private tamaladas. For more information on pricing for a private event, call the Eldridge location at 832-230-3842.

Go, go quick to Tacos A Go Go for tamales.
Photo by Corine Michel
There are currently four locations of this fast-casual taco spot in which to order holiday tamales. A fifth location at 3773 Richmond will open early 2022. It is offering pork tamales for $3.99 each or $19.95 for a six-pack. It's not often vegans can find the delicacy to suit their dietary requirements but Tacos A Go Go has 100 percent vegan tamales for $2.99 each or $14.95 for six. Save a pig, save a dollar.

There are now four locations of this much-loved Mexican restaurant in Houston, including two on Irvington Boulevard. It is selling its tamales for $14.99 per dozen and customers can choose up to two different flavors per dozen. Choices include pork with red sauce, chicken with green sauce or rajas with poblano peppers and cheese. There is also a sweet version with raisins and sugar. Selection may vary by location. Orders can be made by phone or in person. 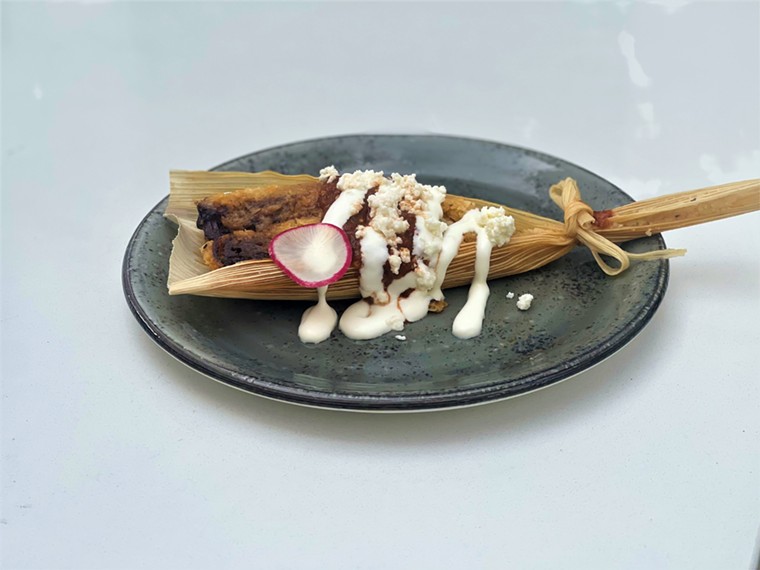 The Pecho de Res at URBE could win a tamal beauty pageant.
Photo by Paula Leguizamon
James Beard Award-winning chef Hugo Ortega's newest concept focuses on the street foods of Mexico and the tamales can be ordered by the dozen for take-out at his uptown restaurant. It is offering Puerco con Adobo (pork in adobo sauce) or Pecho de Res (brisket) for $24 a dozen. The restaurant offers online ordering.
California Privacy Policy California Collection Notice
Do Not Sell My Info
Use of this website constitutes acceptance of our terms of use, our cookies policy, and our privacy policy The Houston Press may earn a portion of sales from products & services purchased through links on our site from our affiliate partners. ©2022 Houston Press, LP. All rights reserved.