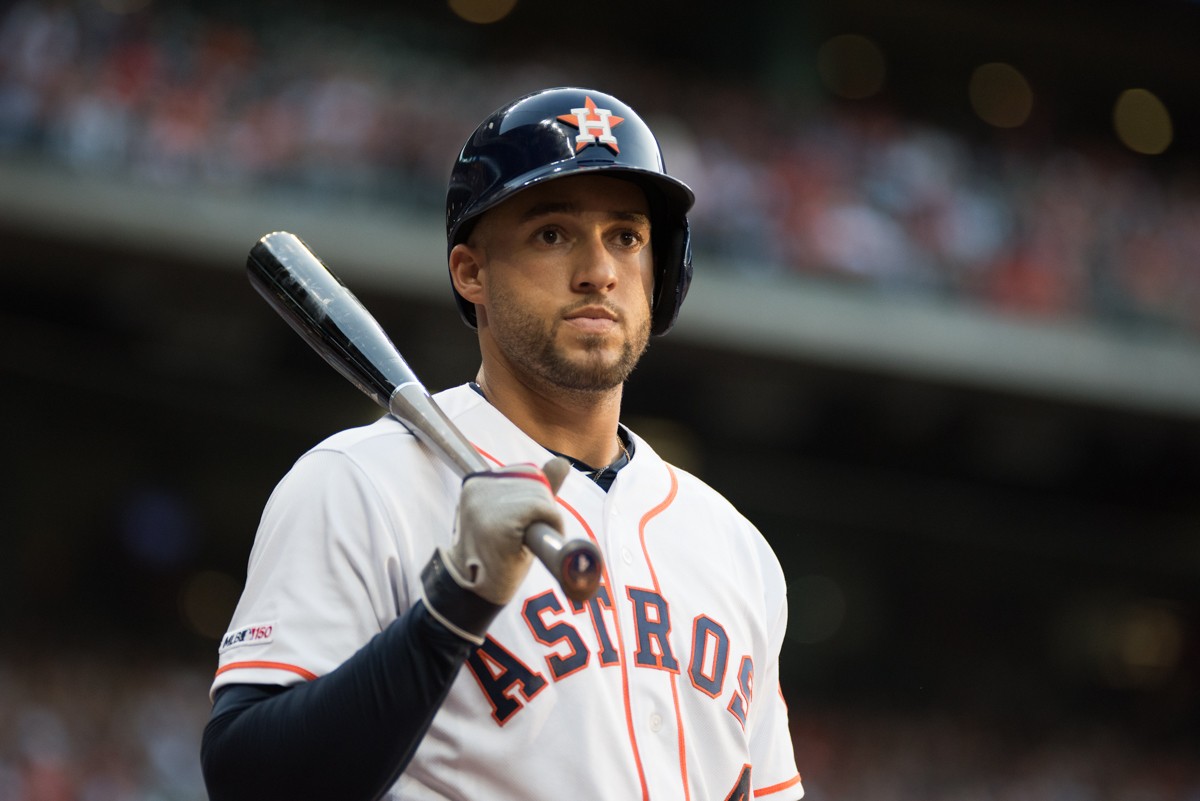 Photo by Jack Gorman
George Springer left Houston via free agency in January.
If nothing else, we can say that 2021, for Major League Baseball, was a better year than 2020. Gone was the shortened season and there were far fewer COVID-related issues than anticipated. The Astros were certainly happy to sweep 2020 under the rug after a rather miserable season, but 2021 was a year of ups and downs for the hometown team.

At the moment we write this, the league has locked out players and baseball in 2022 could be in jeopardy. For now, let's look back at the good and the bad of 2021 here in Houston.

After missing almost two full years of action due to Tommy John surgery, the Astros ace, despite all the rumors to the contrary, re-signed with the team for two seasons. An unrestricted free agent, many assumed he would end up with the Yankees or some other ultra-wealthy big market franchise. Instead, he returns to a team that is now loaded with solid starting pitching. Verlander's experience will help the younger members of the staff and his arm — all accounts are he is fully healthy — will provide a huge boost to a team that struggled to find their ace in the playoffs.

At 37 years old, Gurriel became one of the oldest players in MLB history to win the award. Since the day he joined the Astros, Gurriel has been a hitting machine. And while his power numbers have dropped, his professional hitter mentality at the plate makes him one of the most dangerous bats in the lineup. He also picked up his first Gold Glove at first, a nod to both his offensive numbers and the fact that he has become an absolutely outstanding first baseman.

Now, for some of the bad. In January, Springer left via free agency to Toronto, signing a six-year deal worth $150 million. The Astros allowed their center fielder to walk mainly due to the fact that they didn't want to invest long term in a player on the wrong side of 30 even if ihe was essentially the heart and soul of the current franchise. Springer struggled in Toronto, mainly due to injuries, but seeing him in a Blue Jays uniform still stings for Astros fans.

For the third time in five years, the Astros made it back to the World Series, this time with home field advantage against the surprising Atlanta Braves. The series went to seven games with the Braves ultimately prevailing in Minute Maid Park in front of some very disappointed Houston fans. Despite a hugely successful regular season and a run through the playoffs, the Astros could not finish off the young Braves. Missing a pair of starting pitchers certainly didn't help them. But the team remains mostly intact for 2022...mostly.

The All-Star shortstop put together one of his best seasons in baseball in 2021 at the plate and was the best defensive player in baseball. With 26 home runs and a whopping 7.2 WAR, Correa was widely believed to be the most sought after young talent in the game when he reached free agency at the end of 2021. Thanks to the lockout, he remains in limbo having essentially rejected a five-year offer from the Astros. It is believed he wants 9 or 10 years, something the Astros are simply unwilling to give. There is still an outside chance he will return in 2022, but more likely he will follow the money out.
California Privacy Policy California Collection Notice
Do Not Sell My Info
Use of this website constitutes acceptance of our terms of use, our cookies policy, and our privacy policy The Houston Press may earn a portion of sales from products & services purchased through links on our site from our affiliate partners. ©2022 Houston Press, LP. All rights reserved.