Photo by Oliver Sommers, courtesy of The Oriel Co.
Sarah Brightman
Everyone knows Sarah Brightman is one of the most beloved singers in recorded music history. She is the best-selling soprano of all time, the singer who brought Phantom of the Opera’s Christine to life, a role written specifically for her. The fans who’ve purchased the tens of millions of albums she’s sold over a career in the theater, film, television and in concert reside all over the planet, but a select handful who live in the Houston area will have the chance to hear Brightman perform live this Saturday at Smart Financial Centre.

The show is dubbed A Christmas Symphony and Brightman will share the spotlight with a talented orchestra and choir. While she brings holiday songs and fan favorites to life with her iconic voice, you can bet she’ll also be a sight to behold. Looking back at her concert videos and music specials in preparation of our phone interview with the classical crossover vocalist, we were in awe of the elegance she’s exuded by way of wardrobe choices. Fashion might be an odd place to start a discussion with one of the world’s best-loved voices, but Brightman seems thrilled to begin there and tells us something we can hardly imagine.

“In my normal life, when I’m running around, I literally am running around in a pair of leggings and a flat T-shirt. I’m very comfortable in what I wear,” she said, forcing us to picture her dressed for comfort like us mere mortals. “I’m very interested in fashion. One of the reasons why I do have so many beautiful costume changes is because I create scenarios within my shows, within the show itself, because I come from theater. Wearing a different outfit for that particular three songs or four songs then change, it changes the whole scenario for people when they’re watching it and it helps them along because obviously I’m doing a lot of my hits, a lot of the songs that people know, but of course because I sing more classic area it’s easy to move the time of those.

“So, I can take some songs into a very Baroque area, maybe one of the songs is quite Baroque but the other two might not be so, so we change the arrangements slightly, I create scenarios with the costume and the lights and everything and maybe a prop, and then it becomes something different to when people have listened to it in the last show.

“I’m very careful about picking beautiful runway kinds of pieces to wear because I have so much appreciation for fashion and I know how much thought goes into what these pieces are,” she said. “I have a huge storeroom where I have all these pieces going right back to the ‘70s, I have all these beautiful things and they’re all done by really good designers. I hope one day to sort of do a tour of them to anybody that’s interested, maybe for charity or whatever, because they are truly amazing, some of them.”


Brightman shared a story which suggested not everyone has marveled at her fashion sensibilities the way we have.

“When I did the Olympics for China – and that was a very unusual situation to be in, I was the only Western artist that was allowed, in the end, to do the opening of the Chinese Olympics and I sang the theme song for it – and when I got there, I had actually before thought, ‘What do I want to wear?’” she began. “I found this beautiful Versace dress. Versace hadn’t normally been my taste but this particular dress was perfect. It was incredibly simple. It had one beautiful diamante emblem on it that pulled it all together. I thought, this is the right thing. The song is incredibly pure, this is a very pure look, I’m going to wear this. So, I took it all the way to China.

“And then the director, who was one of China’s most famous kind of movie directors who was asked to direct the whole thing there, he said, ‘Well, everybody has to wear the same.’ And, I said to him, ‘What is the same? What is everybody wearing?’ He said, ‘They’re wearing a T-shirt and some trousers or jeans.’ There was no way. I said, ‘You brought somebody over; you know who I am,’ and I argued for ages with him.”

What the director should have known was Brightman would assert herself. A glance at her resume would have shown she’s stood toe-to-toe with some of entertainment’s biggest names, including Andrew Lloyd Webber, Enigma’s Frank Peterson and Andrea Bocelli, with whom she recorded “Time to Say Goodbye,” one of the best-selling singles of all time. In the end, four billion viewers — more than half of all humans alive - saw her sing in the Versace dress in the ceremonies, the only time she ever wore it, she said. If she someday unpacks it for a tour based on fashions she’s modeled over the years, give credit to your friends at the Houston Press. (Also, here’s hoping she’ll bring along her outfit from the “I Lost My Heart to a Starship Trooper,” Hot Gossip disco days).


“It’s such a combination of things,” she said. “I think it’s timing. It’s a combination maybe of the writer, what they’ve been through their life. It’s a combination of chords. It’s such a full question because it’s so many things that make it happen. And, it’s almost like fate decrees it because often a hit will come from that space between everything where you’re not thinking too much about it and it just happens and you go, ‘Oh my goodness.’

“That’s why, in a way, it’s kind of God-given, it’s something that you’re not in control of,” she added. “I’ve been very lucky enough to have a few very worldwide hits in my time and I feel very privileged that I’ve been able to have it. Once the song has been written, because I’m not a songwriter per se, it’s about the combination of whether the voice actually fits perfectly with that piece. And it especially works if the piece has been written for that particular voice, which happened in my particular case often. It’s a very hard thing in the end to do because you can’t calculate it.”

“It was very different for me to work with a Christmas and a holiday theme because it’s actually a very personal thing to people and means different things to different people. So, I had a very wide repertoire to work from, which is great, but at the same time makes it more complex.

“Obviously I wanted to perform my own songs. I picked the pieces that I felt would fit very well within a Christmas theme. For example, pieces from Phantom are perfect because people often at Christmastime, they’ll go, ‘Why don’t we go see an orchestra playing Tchaikovsky ballet music?’ or ‘Why don’t we go see an opera?’ even if it’s not Christmas-y. That was easy for me to do because a lot of my music is quite celebratory in a way. 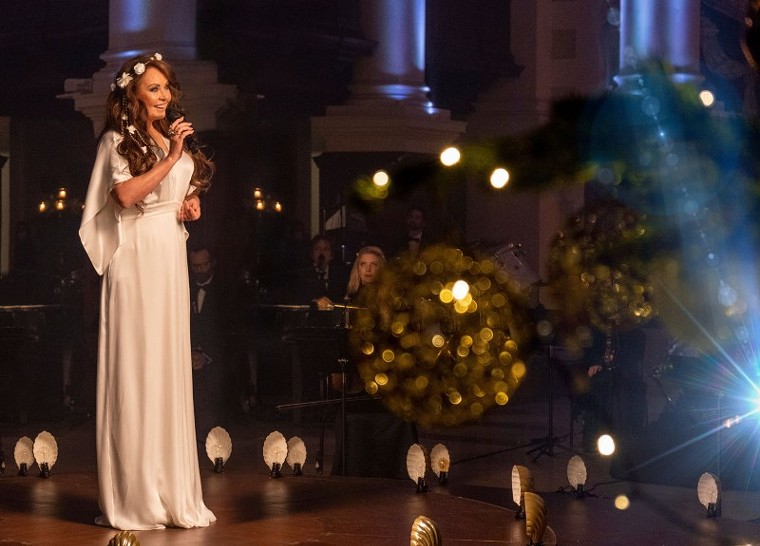 The picture of elegance: Brightman delivering food for the soul.
Photo by Levi Rodgers, courtesy of The Oriel Co.
“It was then picking also the pieces that suit people’s different moods for that time,” she said, noting those pieces also play to the strengths of the tour’s orchestra and choir. “I would pick a piece sometimes that’s sort of spiritual. I’ve got Christian music in there, I’ve got music for people that aren’t Christian, I just want to have a fun Christmas side, and also pieces in there for people that aren’t going through such a good time for Christmas, because I’ve been in that place as well. There’s something in there for everybody.'

Brightman’s consideration of the show’s construction is telling. She wants anyone there to find some comfort in it. She’s been a UNESCO Artist for Peace for her humanitarian and charitable work. Her music has brought together large swaths of disparate people. Before we started the interview proper, Brightman asked me - a total stranger - about my family and friends and whether we’re okay during the pandemic. She cares about people and it’s a huge reason she’s touring now. She shared a final story emphasizing how serious she takes her role as a performer, especially at this time in history.

“In the summer, there was a short period of time in my own country where we weren’t locked down because there were less cases of COVID, so a few theaters and a few festivals were allowed to open. I took my mother and her friend, they’re quite aged, up to see a production of A Little Night Music to the Buxton Festival, which is up in Derbyshire. It was quite difficult to get there, but we finally got there.

“And, we went in and it was packed. All the audience was sitting there with their masks on, very, very quietly. They all watched the production and then afterwards, I’ve never seen this - practically everybody was crying,” she said. “And, the reason for it was, I mean the music was wonderful, but the reason for it was because I think they really realized how important it is to be communally together watching the arts and enjoying it, rather than having to sit at home on your computer screen. I mean, it’s so important. Music has been there. Go back to cave times, we see cave paintings on the wall where people are dancing and singing and everything.

“It’s part of what we are, it’s in our DNA, and I think nobody realized that until it was really for the first time taken away from us all,” she closed. “And, from performer to audience member, we now know that it’s something that we need. We have to have this. It’s food for the soul.”

Sarah Brightman performs A Christmas Symphony Saturday, December 18, at Smart Financial Centre, 18111 Lexington, Sugar Land. 7:30 p.m., $69.50-$125. Visit the venue’s website for its COVID acknowledgment and protocols.
California Privacy Policy California Collection Notice
Do Not Sell My Info
Use of this website constitutes acceptance of our terms of use, our cookies policy, and our privacy policy The Houston Press may earn a portion of sales from products & services purchased through links on our site from our affiliate partners. ©2022 Houston Press, LP. All rights reserved.