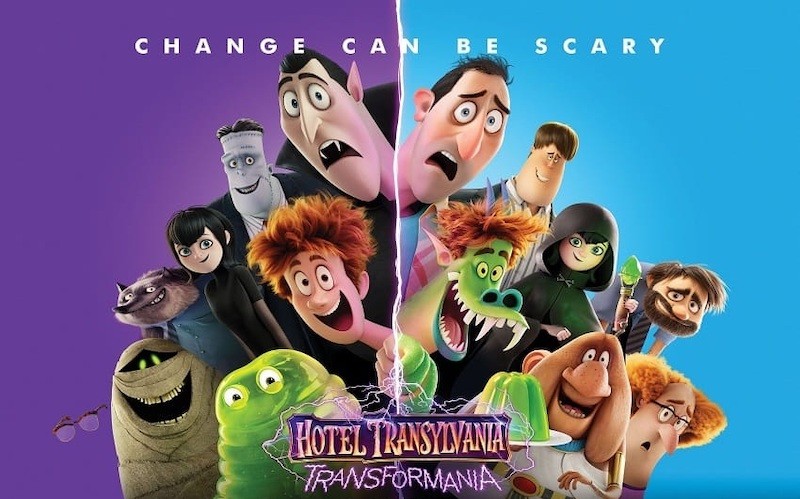 Describe This Movie In One Love at First Bite Quote:


COUNT DRACULA: Children of the night, shut up!

Brief Plot Synopsis: "What if we were the monsters all along?"

Rating Using Random Objects Relevant To The Film: 1.5 crystal skulls out of 5.

Better Tagline: "But Not As Scary As Those Amazon Prime Fees."

Not So Brief Plot Synopsis: On the eve of the Hotel Transylvania's 125th anniversary, Count Dracula (Brian Hull) is set to announce his plans to retire and leave the hotel to daughter Mavis (Selena Gomez) and her husband Johnny (Andy Samberg). One problem: Johnny is human, and something of an idiot. Drac subsequently delays his retirement and Johnny, blaming himself, uses Van Helsing's (Jim Gaffigan) "Monsterification Ray" to transform into a monster. Unfortunately, the ray accidentally turns Drac — and many of his friends — human.
"Critical" Analysis: Adam Sandler, who voiced the character of Drac in the first three Hotel Transylvanias, is somewhat famous for making movies that serve mostly as vacations for him and his friends. So it's not a particularly good omen that even he couldn't be bothered to phone in a performance for Transformania, a movie that would've required a few weeks worth of goofing around in a studio in his pajamas.

"Phoning it in," unfortunately, describes just about the entire production. Like Sandler, director Genndy Tartakovsky has bailed, handing over duties to Jennifer Kluska and Derek Drymon. He still has a screenwriting and "story by" credit, which are both charitable descriptions for an end product that feels like the cinematic equivalent of pulling an all-nighter to finish a research paper you should've started six weeks ago.

The only thing that remotely holds up is the animation, which is the same amusingly exaggerated Tex Avery style that occasionally distracts you from [waves hands] everything else. It was also utilized to better effect by Tartakovsky in Dexter's Laboratory.

And if they're your thing, there are some Easter eggs scattered about, many owing to the franchise's connection to the Universal monster pantheon (there may also have been a Prestige tank in Van Helsing's lab). The human versions of the main cast are also intermittently amusing, most of the laughs coming from how the now Visible Man (David Spade) looks like a naked Larry from The Three Stooges, or newly handsome Frank's (Brad Abrell) obsession with his looks.

Frank, of course, used to be voiced by Kevin James. Ever the faithful Sandler lapdog, James also noped out of Transformania.

On that note, you gotta ask: why didn't everybody? A persistent problem in studio animation is how it continues to insist on using marquee name talent instead of primarily voice actors. There's absolutely no reason for Kathryn Hahn, Steve Buscemi, or Selena Gomez to be in this, because there's nothing distinctive enough about their characters to utilize specific vocal qualities.

That goes double for Andy Samberg. His Johnny is, in short, fucking intolerable. The SNL/Brooklyn 99 alum is definitely a fine comedic actor when he wants to be, but every moment Johnny is onscreen you just wish Drac would tear his throat out and be done with it.

But that would interfere with Drac coming to appreciate his son-in-law's diamond in the rough charms, a process facilitated by his own ... transformation. None of this is groundbreaking, nor is it intended to be, but to paraphrase Rick from Casablanca, I don't mind a cash-grab, I object to a cut-rate one. HT:T's silliness and predictability would be fine if it didn't feel so damn lazy.

Hotel Transylvania: Transformania is now streaming on Amazon Prime Video.
California Privacy Policy California Collection Notice
Do Not Sell My Info
Use of this website constitutes acceptance of our terms of use, our cookies policy, and our privacy policy The Houston Press may earn a portion of sales from products & services purchased through links on our site from our affiliate partners. ©2022 Houston Press, LP. All rights reserved.