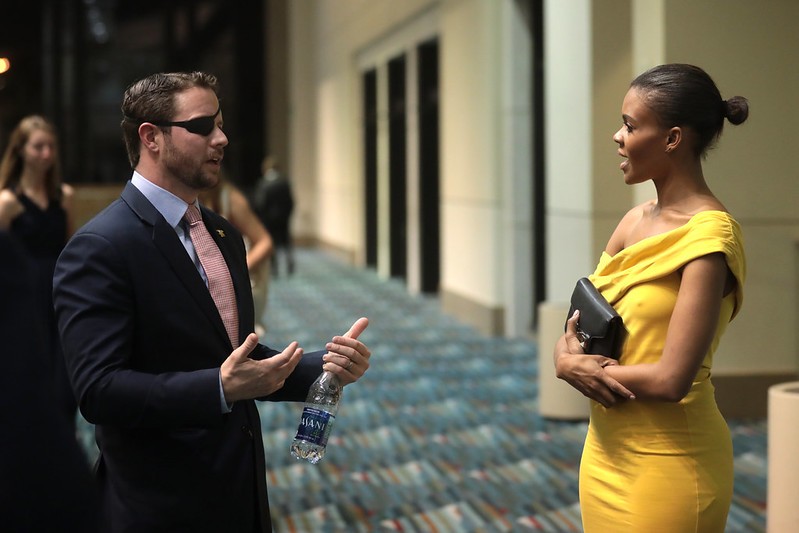 Photo by Gage Skidmore/Flickr
Candace Owens and Houston U.S. Rep. Dan Crenshaw at a 2018 Turning Point USA event in Palm Beach, Florida.
When Justice Stephen Breyer announced his retirement, President Joe Biden vowed to fulfill a campaign promise to fill the vacancy with the Supreme Court’s first Black woman. Republicans, who prefer all nominations be picked by the Federalist Society, promptly freaked out. Our own Sen. Ted Cruz waded into the fray by tweeting that popular conservative gadfly Candace Owens should be the nominee.

Cruz is clearly trolling, but it’s a troll with an edge to it. The implication is that Biden is just picking a nominee based on her race and gender, as if there were not Black women currently worthy of the nomination on their own merits as well.

Unfortunately for Cruz and Owens, all it does is remind people how awful the only Black female friend Republicans have actually is as it thrusts her further into the spotlight.

Candace Owens Believes the Moon Landing Might Have Been Faked

Now for some light-hearted fun. What’s the one “conspiracy theory” that no matter what anyone says you believe is true. Mine is that the moon landing in 1969 was completely faked.
Just nothing about it makes sense. Especially NASA “accidentally erasing” the original footage.

Candace Owens Got Her Start in Gamergate

You can draw a direct line from the targeted harassment campaign known as Gamergate to the January 6 insurrection if you have all the appropriate data. Likewise, Candace Owens owes her political ascension to the crusade for “ethics in video game journalism.” Owens, who had experienced cyber anti-Black harassment at school decided that she was going to start a website called Social Autopsy where harassers could be named and shamed. Prominent social media harassment experts Zoe Quinn and Randi Lee Harper contacted her to explain how such a site could easily be gamed into spreading further harassment. This contact led Owens to believe the left was actually in on a conspiracy to harass and stop her, and her public statements to that effect dragged her into the Gamergate conspiracy fold as their favorite shield against accusations of racism. She’s ridden that wave up to this day.


Hey Tara, would love to introduce you to some of the female survivors of rape who think the #metoo movement has cheapened their assaults.
They are terrified to say so publicly bc of people like you who think there is something proprietary about the victim narrative. https://t.co/zMm9E7coOA

Candace Owens Suggested the U.S. Invade Australia to Free Them From COVID Precautions

In October, Owens said on her Daily Wire television show that the Australian government was oppressing its people with precautions against COVID. The Australian response to COVID has been one of the most effective in the world, mostly spurned on by quick adherence to social isolation in the beginning and a healthy cash bailout while people were quarantining. Owens responded to this with the quote:

“We are watching a replay of the early ambitions of Josef Stalin, Adolf Hitler, Fidel Castro, Hugo Chavez. That is what’s hiding behind the guise of this fictitious, perpetual need to slow the spread.”


She also said the U.S. should invade the country to spread freedom. Later in the program, she claimed to be joking, but was not clear on which part of this weird fever dream was the actual jest.

In one of his rare moments of not being a complete meathead, Joe Rogan pushed back on Candace Owens’ climate change denial when she appeared on his show. Rogan quoted a Scientific American article that said in 87 percent of climate scientists believe that human activity is driving climate change, but only half the American public does. Candace responded:

“Dot com? That means it’s making money. I don’t trust that. If it as a Dot Org I would probably take that. This is just a random website. I don’t believe this at all.”


This is the woman that Cruz thinks he is owning the libs by suggesting she be one of the highest judicial authorities in the land. Instead, it shows that the pool of Black female talent on the conservative side of the spectrum is so poor they couldn’t even make a compelling case for one of their own to get the job.
California Privacy Policy California Collection Notice
Do Not Sell My Info
Use of this website constitutes acceptance of our terms of use, our cookies policy, and our privacy policy The Houston Press may earn a portion of sales from products & services purchased through links on our site from our affiliate partners. ©2022 Houston Press, LP. All rights reserved.