It's Columbus Day Every Day for Little Feat

For some acts, it broke them out in terms of popularity and recognition (KISS, Peter Frampton, Cheap Trick). For others, it burnished the studio material and allowed for stretching out (The Band, Lynyrd Skynyrd, the Allman Brothers Band). For the cult favorite and multi-faceted Little Feat, 1978’s Waiting for Columbus is considered by many not only as one of the best live albums of the era, but the band’s apex as well. 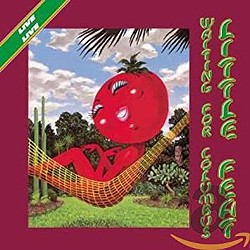 record cover
Its 17 tracks were culled from seven shows and feature the six-man classic lineup tripping through their catalog with skill, passion and zeal. A bonus was the presence of the Tower of Power horn section, and songs like “Dixie Chicken,” “Time Loves a Hero, “Oh Atlanta,” “Tripe Face Boogie,” and “Fat Man in the Bathtub” received extra oomph (a 2002 double CD added 15 more tracks).

The current edition of Little Feat is celebrating the 45th anniversary of those shows by performing Waiting for Columbus in its entirety. The tour stops in Houston March 26 at the 713 Music Hall.

“The album is what, 75 minutes long? We did a dry run in Jamaica a couple of weeks ago, and the show was two hours. Without an encore!” laughs co-founder/keyboardist Bill Payne.

“I think the original idea to do a live album came from Warner Brothers. They were looking for the best way to present this band that was great live but wasn’t [captured] like that on the records. And they’re just great songs.”

In the liner notes for the 2002 reissue, Payne also noted that perhaps co-founder/singer/guitarist Lowell George saw the project as a way to reassert some creative control that he had abandoned. To this day, some believe that—much like Brian Wilson and the Beach Boys—that Little Feat is the singular vision and creation of Lowell George. But Payne differs.

“Things were attributed to [him] that weren’t solely his doing. When this band started in 1969, the notion of what it would be in the future was kind of a Lego concept: What did we want to add? It was music driven, not personality driven.”
Of the original album’s lineup, Lowell George, drummer Richie Hayward, and singer/guitarist Paul Barrere have died. Payne, bassist Kenny Gradney, and percussionist Sam Clayton remain. The current version also includes longtime guitarist Fred Tackett, and “new guys” singer/guitarist Scott Sharrard and drummer Tony Leone.

“It’s a great time to catch this group. I’ve been calling this version Act 3!” Payne—who now sings a few numbers onstage—says. “Because of the reality of events, you have to make decisions whether to go on or not. It happened with Lowell and then with Paul.” 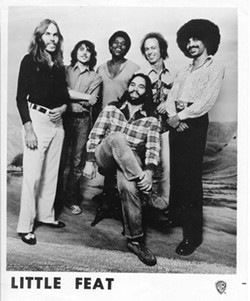 Payne, Hayward, Clayton, George (seated), Barrere and Gradney.
Warner Bros. 1973 publicity photo
A great topic of endless debate among music nerds and journalists, of course, is how authentic any purported “live” record truly is in the end listen. The not-so-secret-secret is that the vast majority feature post-show overdubbing, re-recording and creative editing.

Waiting for Columbus is no exception, although there’s good authority that none of Payne’s original piano or keyboard playing—of which there’s a lot—was redone (though he says a new part was added to “Dixie Chicken”), and only a small portion of Hayward’s drums.

“There were certain things that Lowell wanted to do like get the guitars a little tighter or fix up a vocal. But for the most part, it’s live. And there’s an urgency to it,” he offers. “The tracks were just like a river at springtime. They just carried you down, and you’re hanging on for dear life!”

The sexy Tomato Lady painted by Neon Park on cover of Waiting for Columbus has also become the de facto band trademark. She’s reclining in a hammock and surrounded by foliage native to the Americas.

But while the band will be playing the same songs from the record, they’re not looking to replicate them.

“We’ll do the album, but in our fashion. It may be different instrumentation. I want this band to put their stamp on it,” Payne says. “These songs have morphed over a 45-year-period. We may want to do a song like we did then. Or like 20 years ago. Or how we’ll want to do it weeks from now. And that’s Little Feat in a nutshell. Let’s just take this for a ride.”
Adding to that idea of evolution and currentness, Payne says that he doesn’t look across the stage at Gradney or Clayton any differently from the rest of the group, despite their shared decades of music.

“I’m don’t think in those terms. But I remember when Richie was on his last legs before he passed away, there was an immediacy when your past taps you on the shoulder. In general, I just see the joy and Sam and Kenny’s faces when playing this music. And the [new members] have brought a new energy to the band that’s contagious.”

And while Little Feat is from Los Angeles, their sonic gumbo of rock, blues, and jazz also has a distinctly New Orleans feel, especially beginning with the Dixie Chicken record. Payne to this day takes issue with writers like Elizabeth Nelson who he says questioned their fitness to play that style of music. Bill Payne at one of his many, many keyboards.
Photo by Polly Payne
“I’ve told people over the years, and I’d love to tell her—I guess I can do it through you, Bob!” Payne says. “Is that I was earlier today playing some Mozart, but I’m not from Vienna, Austria. And some Beethoven, but I’m not from Hamburg, Germany. Is that OK with you? Why are you segregating music? It’s ridiculous. Would you tell a musician from New Orleans that they can’t play anything else?”

Outside of Little Feat, Bill Payne has written songs with collaborators ranging Pulitzer Prize-winning poet Paul Muldoon to Blackberry Smoke singer Charlie Starr (some of which he hopes appear on future Little Feat records). He is also a creative writer and photographer, working on a memoir and teases an in-progress Little Feat documentary. And he’s contributed keyboards to scores of records by artists like Toto, Linda Ronstadt, Emmylou Harris, Stevie Nicks, Bonnie Raitt and Pink Floyd.

The 72-year-old Payne has also for years been the touring keyboardist for the Doobie Brothers, a relationship that goes as far back to their 1971 debut record. And there he was on stage left at the Woodlands Pavilion last October for the COVID-postponed tour celebrating the 50th anniversary of their founding.

“Michael McDonald is a friend and so are Pat [Simmons] and Tom [Johnston]. We have a camaraderie, and tour was fun and amazing, and I was proud to be a part of it,” he says. “With so many [instruments], we just tried to say out of each other’s way! Michael could have handled all the keyboards himself!”
Finally, the native of Moody, Texas (near Waco) says that the city of Houston plays a big part in Little Feat history. He notes that audiences here were among the most supportive and fervent, especially early in their career.

And that went especially for, um, the many female admirers of the group, who are name-checked in both “Tripe Face Boogie” (“I was entertained in Houston”) and “Roll ‘Um Easy” (“And I never met girls who could sing so sweet/Like the angels that live in Houston”).

"They were some very lovely, lovely girls. Before that, I was thinking that I never wanted to tour again. But in Houston, I changed my mind. It didn't seem so bad!" he said in 2002. Reminded of the HWC two decades later, he lets out a laugh.

“Helllooo! I think a few of them are still around. And we’ve seen them over the years—though not in the fashion we did when we were younger!” he chuckles. “And I was born in Waco. So once a Texan, always a Texan!”

For more on Little Feat, visit LittleFeat.net. For more on Bill Payne, visit BillPayneCreative.com
California Privacy Policy California Collection Notice
Do Not Sell My Info
Use of this website constitutes acceptance of our terms of use, our cookies policy, and our privacy policy The Houston Press may earn a portion of sales from products & services purchased through links on our site from our affiliate partners. ©2022 Houston Press, LP. All rights reserved.