“How are y'all gonna say you’re ready when you don’t even know what’s coming?” he said laughing as the DJ simultaneously dropped the beat for “East,” the off-kilter track with its jerking accordion loop. The sound  reverberated through the crowd as Earl stood center stage trading verses back and forth with the crowd.

Earl has spent his career forging his own path and refusing to create traditionally commercial music, often releasing work composed of extremely short songs with abrasive, hard hitting beats. It’s a catalog his fans ate up Friday as Earl rapped his set, pacing back and forth across the stage.

NBA Leather, the multi-city North American featuring Action Bronson, Earl Sweatshirt, Boldy James, and The Alchemist, touched down at the House of Blues Friday night, getting a hardcore, dedicated fanbase to brave the cold, gloomy weather and fill the House of Blues to capacity.

Coming fresh off the release of Earl’s fourth album, Sick!, the tour gives the four artists the opportunity to deliver live music to their rabid fanbases. All three artists have worked with Alchemist’s production with Boldy releasing two albums in 2021, Bo Jackson and Super Tecmo Bo. Action, of course, is constantly working with Alchemist, featuring him on his Vice Show, Fuck That’s Delicious, and releasing several joint albums.

Even Earl has teased the release of a secret album that he and Alchemist collaborated on and uploaded to Youtube under a fake name, sending fans scrambling to find the record, still lost in an ever-growing sea of audio and video.

Earl Sweathirt brings his out-of -the-norm style to a live audience.
Photo By Jennifer Lake Reister
There was no need for fans to look for the music Friday as the NBA Leather tour provided fans with hits and mixtape classics throughout the night. After a brief intro, Action Bronson walked onto the stage with the start to his and Alchemist’s 2019 album Lamb Over Rice. Action, continuing to show his pandemic weight loss and introduction into bodybuilding, stalked across the stage, dressed simply in a cut up white tour shirt and black shorts. Throughout his set the East Coast MC gave the energy of a professional wrestler, stopping between songs to flex for the audience. As the house lights shined into the crowd Bronson would point and yell at audience members in appreciation as they flexed back. 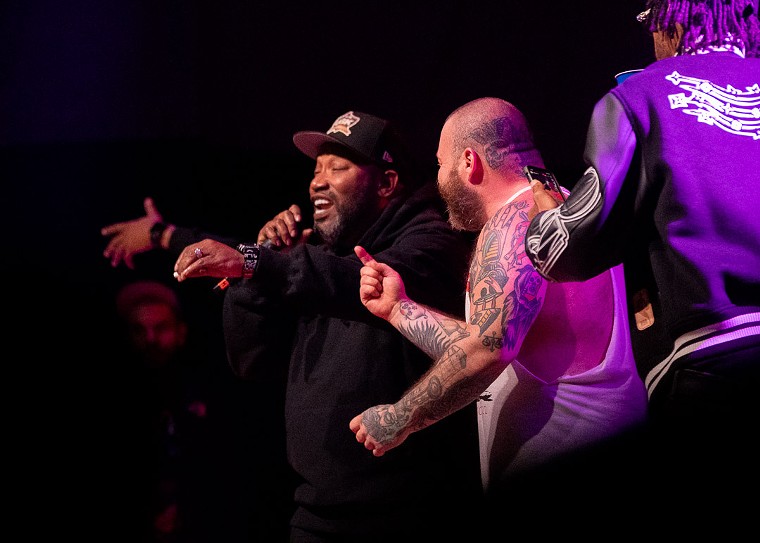 Bun B performs alongside Action Bronson as a surprise guest.
Photo By Jennifer Lake Reister
While the show was composed of MCs from different parts of the country, with Earl from Santa Monica, Boldy from Detroit, Alchemist from Beverly Hills, and Action from New York, the chemistry between all four was evident, with the MCs walking on stage to perform with each other’s set or standing on the side to cheer each other on. They even made sure to pay homage to the city, bringing out half of a legendary southern rap duo.

“I see you! I see everything Houston,” he screamed, making sure the city knew he touched down. Shortly after Action welcomed Bun B and Le$ to the stage as Bun performed the UGK hit “Wood Wheel.” As Bun performed, Action, Alchemist, Earl and Boldy joined him on stage to cheer alongside the Port Arthur native as Pimp C’s verse filled the room.
California Privacy Policy California Collection Notice
Do Not Sell My Info
Use of this website constitutes acceptance of our terms of use, our cookies policy, and our privacy policy The Houston Press may earn a portion of sales from products & services purchased through links on our site from our affiliate partners. ©2022 Houston Press, LP. All rights reserved.