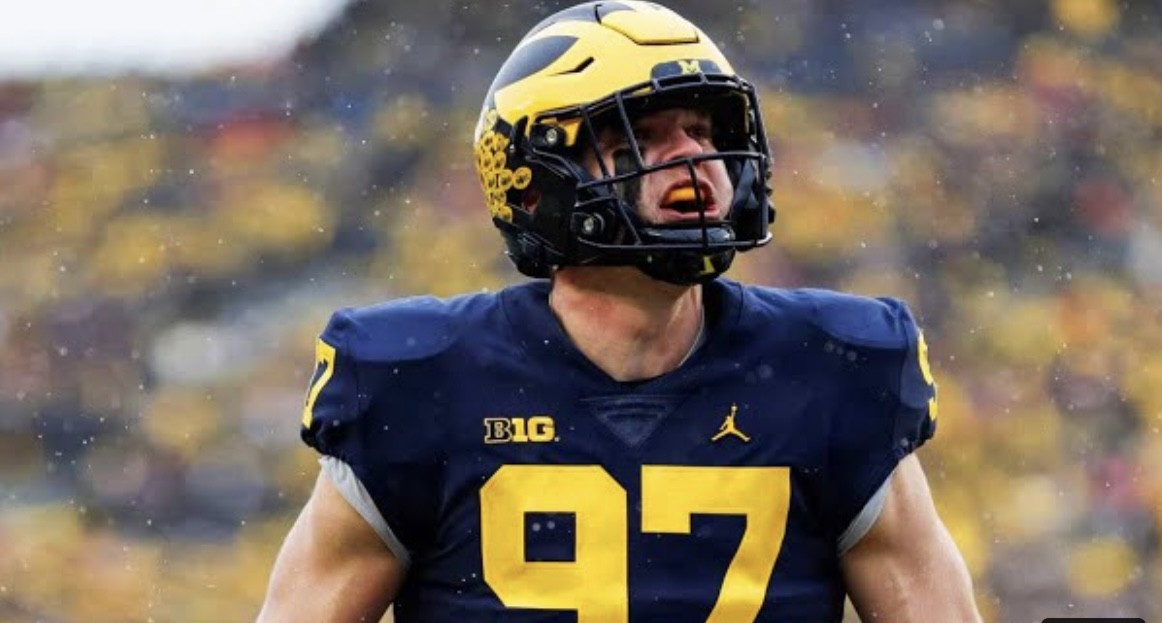 Screen grab from YouTube
Aidan Hutchinson falling to the Texans at third overall would be an NFL Draft godsend.
As of right now, the Houston Texans own the 3rd, 13th, and 37th overall picks in the NFL Draft. That is subject to change, depending on any trades that Texans' general manager Nick Caserio might execute in advance of the draft. If he moves back from pick number 3 or pick number 13, then that likely shuffles the deck, and adds some picks to the Texans' portfolio.

Any analysis we engage in, for now, will assume they're hanging onto those picks, and as such, the Texans are in a situation where they will execute those three picks WELL BEFORE they made their first pick (67th overall) last season. In fact, the Texans will have five picks in the top 80 in this draft, which means they will have five new players before they even had TWO new players last draft season.

There are many ways that we can have fun breaking down and forecasting the Texans' draft fortunes. One way is to look at different combinations of players with their three premium picks (3, 14, and 37). Everyone loves a good combo platter, right? So let's pretend we're at Applebee's or some other chain eatery, and decide which combo platter of NFL prospects we want from a menu put together by Chef Sean Pendergast.

CROWNING MILLS MELANGE - a delicious trio that shows the team is “all in” on Davis Mills
3. OL ICKEY EKWONU, NC State
13. WR CHRIS OLAVE, Ohio State
37. RB BREESE HALL, Iowa Stata
This one is the most fun combination of players, but unfortunately it is the most unlikely, in my opinion. I can't imagine that Nick Caserio goes into Thursday and early Friday, and doesn't come away having addressed the team's porous defense in some way, especially with Lovie Smith as the head coach. That said, Ekwonu might be the best player in this draft, and Olave and Hall have solid arguments for being the best players at their position.If you can come away with the best offensive lineman, wide receiver, and running back in a draft class, that's pretty good, right?

PEACH TREE POTPOURRI - a succulent combo of Georgia Bulldogs
3. EDGE TRAVON WALKER, UGA
13. DT JORDAN DAVIS, UGA
37. ILB NAKOBE DEAN, UGA
If it were to happen, this combo platter is more a matter of coincidence than Caserio willfully saying "we MUST have players from Georgia," although if you're going to pick a unit to just blindly draft players from, the Georgia defense is it. Walker is getting routinely mock drafted in the top five overall, so third overall is about right for him. Davis' spot is right where he is forecasted, and he would be a huge boost in the run defense. Dean is the one that is a wide card. If he were still there at 37th overall, it would be a surprise, but a pleasant one for Texans fans.

BIG TEN BELTBUSTER - a beefy smorgasbord of Big Ten beasts
3. DE AIDAN HUTCHINSON, Michigan
13. C TYLER LINDERBAUM, Iowa
37. RB KENNETH WALKER III, Michigan State
This is an intriguing one that was very popular with listeners to my radio show on SportsRadio 610. Hutchinson, the  presumptive number one overall pick by many, falling to availability at three would be a shock. So taking him there would be a no brainer. Linderbaum is a bit of a reach based on the position he played. Centers don't normally go that high, but he is an elite prospect. Walker fills a major need at running back, and is considered the second best in this draft, behind Hall.

SOUTHERN COOKING - spicy SEC dishes (non-UGA)
3. OL EVAN NEAL, Alabama
13. CB DEREK STINGLEY, JR., LSU
37. DL DeMARVIN LEAL, Texas A&M
This is a combination of SEC players with one caveat — they don't play for Georgia. So we have a Georgia platter, and a non-Georgia platter. Neal is safe pick at number three. Stingley's stock is all over the place, and he could be there with that first round pick the Texans got from Cleveland. Leal was viewed as a first round prospect coming into the season, and his stock has dropped somewhat, but he fills a need.

For what it's worth, the people seem to really be thirsty for the Big Ten Beltbuster:


#Penderpoll, from 7am segment @SportsRadio610 … choose one DRAFT COMBO PLATTER for the Texans: