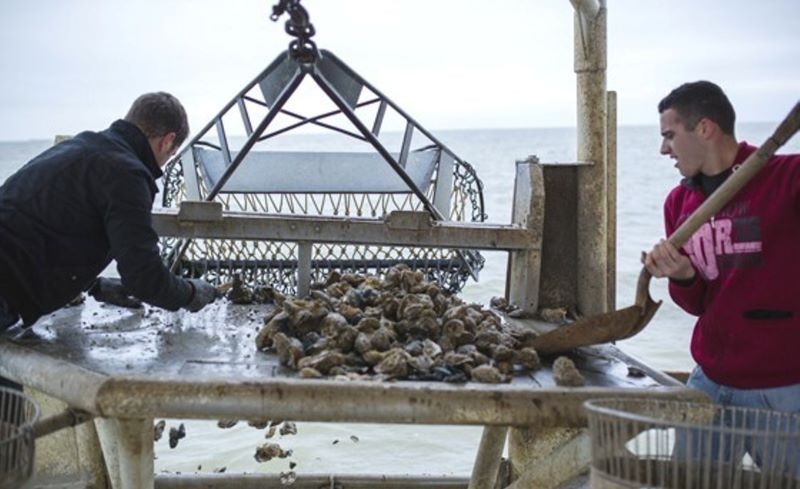 Photo by Daniel Salazar
Oystering, already tough, got tougher this season.
Although the future looked bright at the start of the Texas oyster season back in November, it is now clear that those who depend on the public reefs for their livelihood have been having a disappointing season.

And for once it’s not due to hurricanes, droughts, or other natural disasters, but because Texas Parks and Wildlife, the state agency that oversees the Texas oyster season, has determined via their sampling that the oysters in most of the state public waters are undersized, triggering closures of most sections months before the season actually ends.

Now, the season is slated to wrap up entirely at the end of this month, and the state oystermen are currently only allowed to work the reefs in five sections of the state bays including TX 8 (a section of Galveston Bay just off of Smith Point), TX 9 (a sliver of West Galveston Bay running along the island’s coast), TX 14 (a portion of Tres Palacios Bay), TX33 (Corpus Christi and Nueces Bay), and TX 34 (the Lower Laguna Madre), according to the state website, which was last updated in late March.

The other 31 sections that comprise the state public reefs have been closed for weeks already, with TPWD officials opting to shut down oystering in some waters as early as December and another round of closures being triggered by the state’s traffic light program that kicks off automatic closures based on pre-determined sampling guidelines from the reefs.

This truncated season has hit the commercial oystering community, a group of about 1,500 workers and 450 licensed boats that is estimated to bring in about $50 million annually hard, and they’ve been particularly outspoken and irate when facing this hot on the heels of the financial pinch most people have felt over the past two years due to the Covid-19 pandemic. The anger translated to a peaceful protest last week with the deft-moving oyster boats circling the waters of closed bays, nets firmly pinned up at the back of each vessel.

Protest organizer Johny Jurisich, owner of Texas City-based U.S. Sea Products and a proud oysterman whose family has been in the business since 1850, chose to stage the event at Dollar Reef, an area that he contended shouldn’t be closed. “We wanted to get out and make a point about what the state is doing here,” he said. “This is a make-or-break season for a lot of us. We’ve had so many bad years, and now we are finally having a good year, but we’re not allowed to go in and work most of the reefs.”

Admittedly, it’s been one thing after another for the people who make their living from the oyster reefs. The state makes up about $50 million of the annual profit of the $250 million Gulf Coast oyster industry, but the reefs have been beset with problems for more than a decade now. Hurricane Ike wiped out some of the most abundant reefs in Galveston Bay when debris from the storm smothered large swathes of the ancient beds in silt back in 2008.

This was followed by the harsh drought that gripped the state starting in 2011 which altered the pH balance of the water and left the oysters vulnerable to predators. Meanwhile the floods and storms that sent freshwater into the bay systems over the following years made the waters too fresh which opened vast portions of Galveston and other bays to the chance of disease.

Meanwhile, the state has been struggling to figure out how to balance preserving the resource that is the public beds while also allowing enough harvesting for commercial oystermen like Jurisich make their livings. If enough oysters aren’t allowed to remain in their beds to sprout new oysters and to filter the bays, the entire system will collapse, state biologists have long warned.

But the steady stream of catastrophe over the past decade has guaranteed that there simply are not enough oysters or the ones that are there are not the required size (three inches or longer) needed to support the Texas industry for an entire season.

Jurisich and others in the industry disagree with this stance, maintaining that many of the currently closed reefs must have properly sized oysters by now since some bays have been closed to the public season for years while the low pandemic prices have translated to a natural break for the reefs since the full force of the licensed oyster boats has not been focused on the bays since the pandemic began.

“The market was slammed by the pandemic and restaurants just didn’t want to buy oysters that season,” Jurisich said. “We had been seeing boat prices of $40 per sack before, but during the pandemic they dropped to $20. We were only getting enough of a price to make it worth going out like three days a week. But the state is still keeping us out now. This is going to be a make-or-break year for a lot of people, and I think we’re going to see a lot of boats go out of business. They depend on being able to work these reefs, but they can’t this year.”

"This is going to be a make-or-break year for a lot of people, and I think we’re going to see a lot of boats go out of business."

Either way, the aim has long been to simply shrink the number of oyster boats working the Texas reefs. Texas placed a moratorium on oystering licenses years ago—you have to find someone who is currently active in the industry to sell you their valid license, and if anyone simply retires and doesn’t sell their license before it expires that place in the program is deleted from the list. Jurisich predicts that, if things continue going this way, it will soon become impossible to make a living from oystering on the Texas Gulf Coast.

He noted that even though this season runs through the end of April, it is effectively over for most oyster boats, including those that work for or are owned by U.S. Sea Products. Although his company usually has about 30 boats working the public reefs during the Texas oystering season, they haven’t even sent a boat out in a month, he said. “I was out there in the few sections that are open, and, I checked,” Jurisich said.
“There are no oysters worth getting in those spots while the reefs that might have something are closed.”

But the industry still hasn’t shrunk down enough to make the toll exacted annually sustainable, TPWD officials maintain. In fact, in addition to the temporary closures for most of the reefs, TPWD officials are now considering permanently closing Carlos Bay, Mesquite Bay and Ayres Bay near Rockport, going so far as to hold a public hearing on the proposal last month in Austin.

The pushback on this translated to more than 2,500 written public comments and more than four hours of testimony. Ultimately, the response was so contentious the TPWD Commissioner Chairman Arch “Beaver” Aplin (also the CEO of Buc-ee’s) delayed the vote and said a task force needed to study the issue before they could make a decision. “This is not kicking the can down the road,” he told the crowd. “We need to get it right.”

But what getting it right is going to look like is anybody’s guess, with TPWD’s actions indicating the state agency is leaning toward more government control while the oystermen continue to insist that keeping such a tight rein on the resource will result in further decline. The commercial community and environmental community are at odds, and as the end of the Texas public season looms and the oysters continue to come in undersized, or not at all, it seems likely they’re going to stay that way.
California Privacy Policy California Collection Notice
Do Not Sell My Info
Use of this website constitutes acceptance of our terms of use, our cookies policy, and our privacy policy The Houston Press may earn a portion of sales from products & services purchased through links on our site from our affiliate partners. ©2022 Houston Press, LP. All rights reserved.