Photo by Joseph Cultice
The Meat Puppets are back on the road, with all of the original members along for the ride. Curt Kirkwood (guitar, vocals), Cris Kirkwood (bass, vocals), and Derrick Bostrom (drums) are joined by Elmo Kirkwood (guitar) and Ron Stabinsky (keyboards) for an upcoming tour, which will stop in Houston on May 12 at the Heights Theater.
When it comes to bands that possess, as was said of the Delta Tau Chi fraternity in Animal House, “a long tradition of existence,” original members can be hard to come by. Not so with the Meat Puppets. After years of shifting lineups, the original band is back together and on the road, appearing in Houston at the Heights Theater on May 12, in a co-headlining show with fellow '90s survivors Mudhoney.  Additionally, the Meat Puppets will release a live album, Meat Puppets Live Manchester 2019, on May 6.

The Meat Puppets came together in Phoenix around 1980, when brothers Curt Kirkwood (guitar, vocals) and Cris Kirkwood (bass, vocals) joined forces with Derrick Bostrom (drums). The band rose to prominence with a mix of heavy metal, psychedelia, country, and punk (among other genres) during the early '90s, inescapable on MTV thanks to their breakout single “Backwater” from the hit album Too High to Die. Success was not kind to the Meat Puppets, though, and within a few years the band had fractured, torn apart by excessive drug use and the peccadillos that can drive a long-struggling band into the ground when fame finally arrives.
The Meat Puppets went on hiatus in 1996 after being dropped by their record company. Cris Kirkwood’s substance issues continued to plague him, and in 2003, he was shot during an altercation with a police officer in a Phoenix post office. Kirkwood went to jail and was released in 2005. He used his time inside to kick his drug habit and regain control of his life, emerging from prison ready to resume his career. The brothers Kirkwood began playing gigs in 2007, using several different drummers and auxiliary musicians.

After the breakup, original drummer Bostrom began working in the computer field and did not rejoin the Kirkwoods until 2018. The band is now back together, joined by guitarist Elmo Kirkwood (son of Curt Kirkwood) and keyboard player Ron Stabinsky.

Speaking from his home in Phoenix, Bostrom scoffs when asked if the band is busy preparing for the upcoming tour. “Hell, we’ve been in tour prep for two years,” he says, referring to the pandemic. “We live in three different states, so we’re mostly enjoying our time off until we get together and have to deal with each other.”

Bostrom’s initial musical inspiration came from the Banana Splits, a fictional band made up of furry costumed characters who played bubblegum rock and roll on their Saturday morning television show in the late sixties. As the years passed, Bostrom - along with the Kirkwood brothers - was enraptured by punk.

Like many bands that came out of the punk movement, the Meat Puppets branched out musically but still retained the punk attitude. “Punk rock, so to speak, quote unquote, attracted a lot of different types of people,” Bostrom notes. “That was what attracted me to it initially. It was a whole different crew. I particularly liked Johnny Rotten (Sex Pistols).

“As far as the music goes, it was never about any one style, and it became DIY,” Bostrom continues. “If you start from a position of ‘I know nothing about music, but I want to play,’ you’re going to wind up self-teaching yourself into something different.” 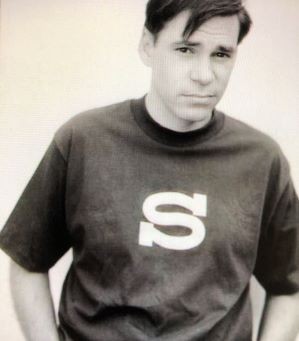 Meat Puppets drummer Derrick Bostrom in 1995, right about the time that the wheels came off.
Photo by Fred Nelson Creative Commons Attribution-Share Alike 4.0
The fact that the three band members had divergent tastes certainly contributed to its amorphous musical style. “I never listened to [heavy metal] but Curt did, whereas Cris listened primarily to jazz. And I listened predominantly to the Banana Splits and the Carpenters,” Bostrom says. “I think it really boils down to the idea that there were no constraints.”

Bands that contain brothers have often encountered a tough road. The Kinks, Oasis, The Allman Brothers, The Everly Brothers, and Kings of Leon all come to mind, as do the Meat Puppets. How does one navigate a safe course in a band with male siblings in its ranks? “Through insults, violence, and avoidance,” Bostrom says, and he doesn’t seem to be totally kidding. “Just like the rest of them,” he adds.

When the Kirkwood brothers reformed the Meat Puppets, Bostrom was not part of the band. Did he consider rejoining? “It wasn’t something I was able to do. I wasn’t far enough along in my career to juggle both [music and a day job]. And there was still some other stuff that I had to work out in my head about whether I actually wanted to do it.


“I watched the guys from afar for a while,” he says. “I frankly felt that the work they were doing without Bostrom was really missing my fingerprints. Badly, in my opinion. When people started coming around asking about doing books or movies and the hall of fame stuff, and when people at work started asking me about it, I started to slowly but surely realize that it mattered to people. And I came around to realize that it mattered to me too. It didn’t take more that a couple of times playing with these guys again for me to realize just how big that hole was in my life. The Meat Puppets, to me at least, and the other guys, is a very, very special thing.”

With a lengthy break from the world of rock and roll, Bostrom has attained perspective. “Now I’m getting closer to retirement age, and I want to reclaim that part of my past,” he says. “And since the Meat Puppets are such a national treasure, it’s not that difficult for me to convince the company I work for that it’s worth their while to give me the time off to hit the road.”
Bostrom has returned to the Meat Puppets as part of a five-piece ensemble, and the addition of new musicians has changed the band’s sound. “I think we were amazing then, and we’re amazing now. Now we’ve got a five-piece instead of a three-piece, and that helps, because we’re older and we want to explore different kinds of music,” Bostrom notes. “But the three-piece tore shit up at its peak. Our records were pretty good, but our live shows were astounding. And now, as a five piece, it’s a nice, full sound that’s still terribly psychedelic, very limber, very hard-edged. In a lot of ways, I like it better now. We’re hitting new heights nightly and doing crazy shit.”

Along with the perspective afforded by time, Bostrom has also attained a heightened sense of priorities. “When I got back in this band, it was a fucking lifeline, because I realized, after I started hanging out with these guys again, that they have let everything go, except for what matters. And that is so rare to see around people. Most people wouldn’t know what matters if you hit them in the head with a sledge hammer.”

The Meat Puppets will appear on a co-headlining bill with Mudhoney on Thursday, May 12, at the Heights Theater.  The Meat Puppets go on first. Doors at 7 p.m., show at 8 p.m.  For more information, visit theheightstheater.com. $24 and up.
California Privacy Policy California Collection Notice
Do Not Sell My Info
Use of this website constitutes acceptance of our terms of use, our cookies policy, and our privacy policy The Houston Press may earn a portion of sales from products & services purchased through links on our site from our affiliate partners. ©2022 Houston Press, LP. All rights reserved.