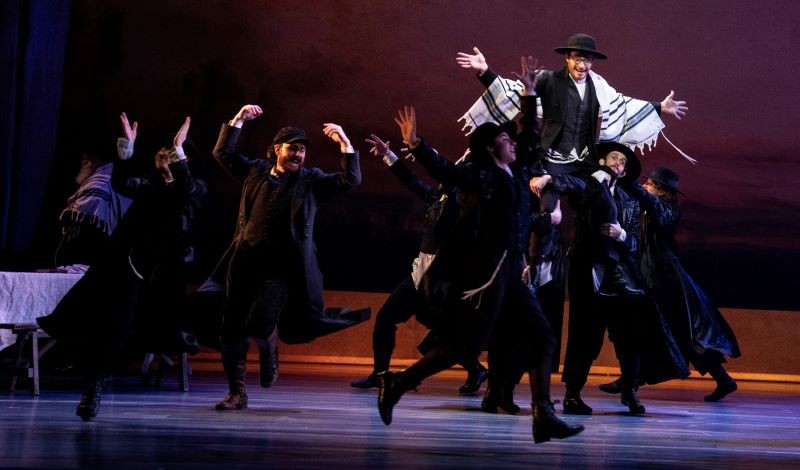 Photo by Joan Marcus
The company of the North American tour of Fiddler on the Roof.

Relevance haunts the classic musical Fiddler on the Roof (1964). In the acclaimed Bartlett Sher Broadway revival from 2015, on its American tour presented by Broadway at the Hobby, a connection shocks us with a slap.

Perchik, a young radical in thrall to the new social and political ideas fomenting through Russia, arrives in the shtetl Anatevka and casually mentions he's from...Kiev. You can hear the audience's sharp inhale. Suddenly this musical has smashed through the fourth wall. In one line of dialogue, this beloved musical play rockets headfirst into today's headlines. The relevance hovers over the evening, tinging everything that follows.

In his famous short stories from the early 20th century, Shalom Aleichem wrote about the fictional town Boyberik (renamed Anatevka in Fiddler) and its destitute pious milkman Tevya. The village was located in the infamous Pale of Settlement, imperial Russia's solution to its “Jewish problem.” From the reign of Catherine II up until the 1917 Revolution, all Russian Jews were forced to live there, a vast area which encompassed Ukraine, Lithuania, Belarus, Crimea, and the eastern section of Poland. Yet even here, some towns outlawed Jews. There were rare exceptions for military officers, nobles, the university educated and artistically gifted who were given dispensation to live outside in Moscow or St. Petersburg.

At the time of the musical, circa 1905, pogroms and social unrest were rampant in the Pale. The ironic prayer from Anatevka's Rabbi, “May God bless and keep the Tsar...far away from us,” is frighteningly accurate.

What works so well in Fiddler is its focus on Tevye's family and the community of Anatevka. Immediately, we empathize with their financial struggle, their abiding faith, their strength in family, their stalwart “tradition.” When the musical wasn't working in tryouts, someone asked the authors (book writer Joseph Stein, composer Jerry Bock, lyricist Sheldon Harnick, director and choreographer Jerome Robbins) what their show was about? The light bulb went off. It's Tevye's way of life, the village's history, it's their “tradition.” The opening scene was rewritten and that gloriously uplifting opening number “Tradition” with its fiddler on the roof was born. It's the leitmotif of the show; the tie that binds.

Tradition is what Tevye fights for. It's what the inhabitants of Anatevka live for. But it's also what's being chipped away in his world. When his feisty daughters rebel against the patrimony and demand to marry the men of their choice – not Papa's choice as their religion dictates – tradition gets a seismic kick in the ass. Progress and modernity are in the air, and Tevye must come to terms with changing times or he will lose his family. It's a powerful, resonant theme no matter where this musical is set.

Broadway's adaptation softened Aleichem's much darker tales. This is a musical after all. There's a lot of Borscht Belt humor in Stein's book. Are these characters Russian or lower East Side baggy-pants comics? Stein began his career writing for golden-age television funnyman Sid Caesar, so his comic one-liners, especially for Tevye as he debates with a distant God, are sharp and spot-on.

Director Sher, a multiple Tony-award winner, is renowned for his taste and visual style when he reimagines Broadway musical classics (South Pacific, The King and I, My Fair Lady) or straight plays (Oslo, To Kill a Mockingbird). His Fiddler is “inspired” by Robbins' original magical production, and his usual theater collaborators work their wizardly ways: set designer Michael Yeargan, costumer Catherine Zuber, lighting designer Donald Holder. They do exceptional work.

But the star of the night just might be Israeli choreographer Hofesh Shechter (whose work is recreated for the touring production by Christopher Evans). His dances, also “inspired” by Robbins' award-winning work, are visceral, invigorating, and, damn downright exciting. His numbers propel this show. Yes, the famous wedding “bottle dance” is cloned from Robbins – one of Broadway's most iconic numbers and not to be messed with – but the other sequences are ripe with vigor, energy, and character development. Shechter was nominated for a Tony but didn't win. He should have.

This show's been on the road for a while and plays through June around the U.S. Except for the dancing, the steam seems to have gone out of the tour. Two theater pros I know left at intermission, and when I said with tongue in cheek that they'd never know the ending if they left now, they huffed about the performances being “phoned in.” I see their point. The show needs a good shot of Vitamin B. The pacing is off and a bit draggy. Pick it up, folks.

The show's strength – apart from the distinctive dance numbers – depends on the interplay between Tevye (Yehezkel Lavarov) and wife Golde (Maite Uzal). Lavarov is good, but can never erase memories of incandescent original Broadway star Zero Mostel or the movie's more earthy Topal. Exasperated, yes, he's got that down, but he seems more sedate and much easily swayed. (Shades of that phoned-in quality, perhaps?)

Uzal is prickly and sharp-edged, no soft spots. Their tender duet, “Do You Love Me,” falls flat because of this. The five daughters are ciphers and are defined only during their songs (“Matchmaker, Matchmaker,” “Far From the Home I Love,” “Now I Have Everything”), so we really don't get to know them. They are interchangeable. Their suitors are more substantial: shy geeky Motel the tailor (Daniel Kushner), radical Perchik (Solomon Reynolds), bookish gentile Fyedka (Jack O'Brien), who slyly turn the musical toward them. If you want a visceral performance, watch ensemble performer Ali Arian Molaeri, as the Fiddler. He spryly shadows Tevye throughout the show, augmenting the drama, sinuous and slightly creepy. He's the sound of what's to come.

Fiddler on the Roof is definitive Broadway. In the '60s, the Great White Way began to veer into adult territory: dark, edgy, thought-provoking. Sondheim was in the wings, but Fiddler, with its parochial setting yet universal appeal, set the standard that would define the era. It has heart, soul, fabulous dancing, and seriousness of purpose. Whenever it's revived, it speaks to us anew. It will run always.

Fiddler on the Roof continues through May 1 at 7:30 p.m. Wednesdays and Thursdays; 2 p.m. and 8 p.m. Saturdays; 2 p.m. and 7:30 Sundays at the Hobby Center, 800 Bagby. Masks required. For more information, call 713-315-2400 or visit houston.broadway.com. $31-$201.
California Privacy Policy California Collection Notice
Do Not Sell My Info
Use of this website constitutes acceptance of our terms of use, our cookies policy, and our privacy policy The Houston Press may earn a portion of sales from products & services purchased through links on our site from our affiliate partners. ©2022 Houston Press, LP. All rights reserved.