Photo by Jack Gorman
Jeremy Peña's bat may be coming around.
What a strange week in Astro land. After coming off a tremendously successful road trip — their longest of the season — they lost two straight series to the Mariners and Marlins, not exactly the cream of the MLB crop. As per usual, pitching fared pretty well, but the offense just could not score runs. That turned around just a bit in the final game against Florida with homers from Jeremy Peña and Jose Altuve, but the offense remains underwhelming.

This week, we want to dig into four thoughts about the offense and some players specifically to see what is going on and if, as manager Dusty Baker predicts, things will turn around with time.

We could see a rookie rebound.

If you break Jeremy Peña's season down into roughly 15-game increments, you are able to see the roller coaster that is a rookie season. Look at his numbers over these stretches:

Now, over the last eight games, he has progressively seen his numbers sink farther.

Not surprisingly, during the 3-5 stretch for the team, when Peña hits, the team wins. He was 6-11 with 4 RBIs and only 2 strikeouts in those wins. In the five losses, he was 1-16 with 6 strikeouts. Ugly.

But, he saw the ball much better the last few games and homered on Sunday. If trends hold, he could be due for a turnaround soon, which the Astros desperately need. 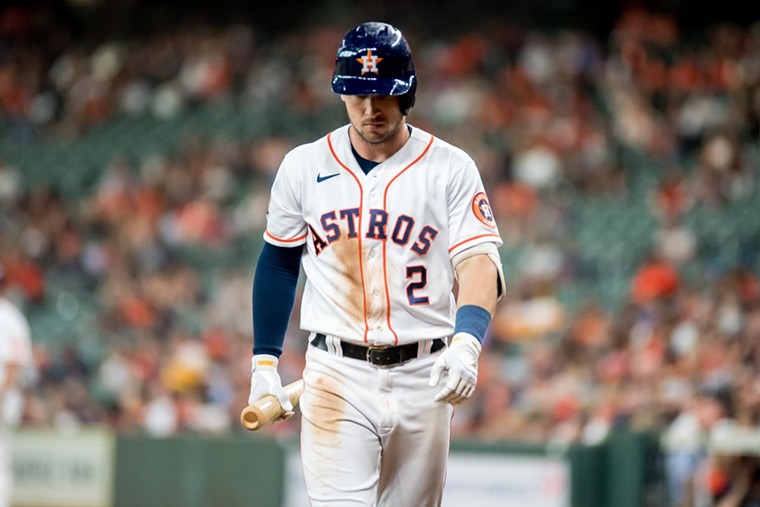 Is Alex Bregman finally coming out of his slump?
Photo by Jack Gorman
Is there light at the end of the tunnel for Yuli Gurriel and Alex Bregman?

There has been a LOT of talk, and rightfully so, about the Astros first and third basemen this season. Bregman, for the season, is batting just .225, but he has walked enough to keep his on-base percentage just OK, and his OPS. Gurriel is hitting .221, but he isn't walking like he has in the past. And both players have slugging percentages well below what we have come to expect from them in seasons past.

There are some signs of life, however. Gurriel, over the past 10 games, has hit .257 with 4 walks (he roughly 8 total prior to then). In the last six games, he's gone 8-24 and hit safely in all but one of them. Bregman has hit safely in five of his last six games and walked in the one he didn't.

None of these are numbers to write home about, but they do represent a very minor, but possibly significant, trend in their plate appearances. We'll see if it holds or, better yet, improves.

What to do about the black hole at the bottom of the lineup.

According to StatMuse.com, the Astros are hitting .239 with runners in scoring position this season. That is good for 19th. Last season, they were close to the best in baseball in that category. A big reason for that, beyond the issues with Gurriel and Bregman, has been the absolutely brutal hitting from the bottom portion of the lineup including Jose Siri, Chas McCormick, Martin Maldonado and Jason Castro. Those four represent four of the six worst batting averages on the team. When the Astros get to the eight and nine hitters, they may as well ignore the DH and let pitchers hit.

Some of this may (emphasis on may) be helped when Jake Meyers returns from his rehab stint in Sugar Land. Most likely, it will take him time to re-acclimate to the majors, but in the long run, he is clearly the better option at the plate. As for Maldonado and Castro, the team is not going to move or demote Maldy. He remains one of the better defensive catchers in baseball. Castro is another matter.

As a means of preserving Maldonado, Castro has played in roughly a third of the Astros games. His defense has also been good, but he is hitting near .100 at the plate. He's as good as an automatic out, which is just killing their chances to turn over the lineup, particularly when runners ahead of him get on. It does make one wonder if there is a way to get help at that position to help at least some of the time because, right now, it is ruining Astro scoring opportunities.

Is a trade realistic to help the offense?

The Astros will be active buyers as the trade deadline approaches, but the question is how aggressive they will be and what positions will they target? You have to guess they'll be looking for mainly short-term help in the outfield and, potentially, behind the plate. Wilson Contreras is the big name out there and would represent a massive upgrade as a short-term rental catcher, but the Astros don't normally make those types of deals for positions that are already filled.

They also seem to be pretty set on the pitching staff, so moves to get better depth in the outfield or perhaps replace Castro with a better hitting catcher? The minor leagues probably won't be in the mix even if Pedro Leon has been swinging the bat pretty well. This is still a team that is aiming for a deep run in the postseason and they need some veteran juice to help with that. I would imagine GM James Click will be active, but not willing to trade away key pieces in the minors or at the major league level unless it provides them a significant upgrade and long-term salary flexibility — a tall order.

More likely, deals like the one that brought in Maruicio Dubon feel right. They won't move the needle or make fans giddy, but they can be important as the season goes along.

The Astros are in Arlington this week to face the Rangers followed by a three-game set at home against the White Sox. If they are going to start to find their offense, they better do it fast because the following week-plus features nine games against the Mets and Yankees. The Rangers have managed to leapfrog both the woebegone Angels and Mariners standing now 8.5 games back of the Astros. They've only won four of their last 10, but they have some big names in the lineup worth watching. The White Sox are roughly in the same boat as the Rangers, drifting along below .500. If the Astros are going to feast, it's time to do it.
California Privacy Policy California Collection Notice
Do Not Sell My Info
Use of this website constitutes acceptance of our terms of use, our cookies policy, and our privacy policy The Houston Press may earn a portion of sales from products & services purchased through links on our site from our affiliate partners. ©2022 Houston Press, LP. All rights reserved.