Rockets Take Surprising Haul in First Round of NBA Draft 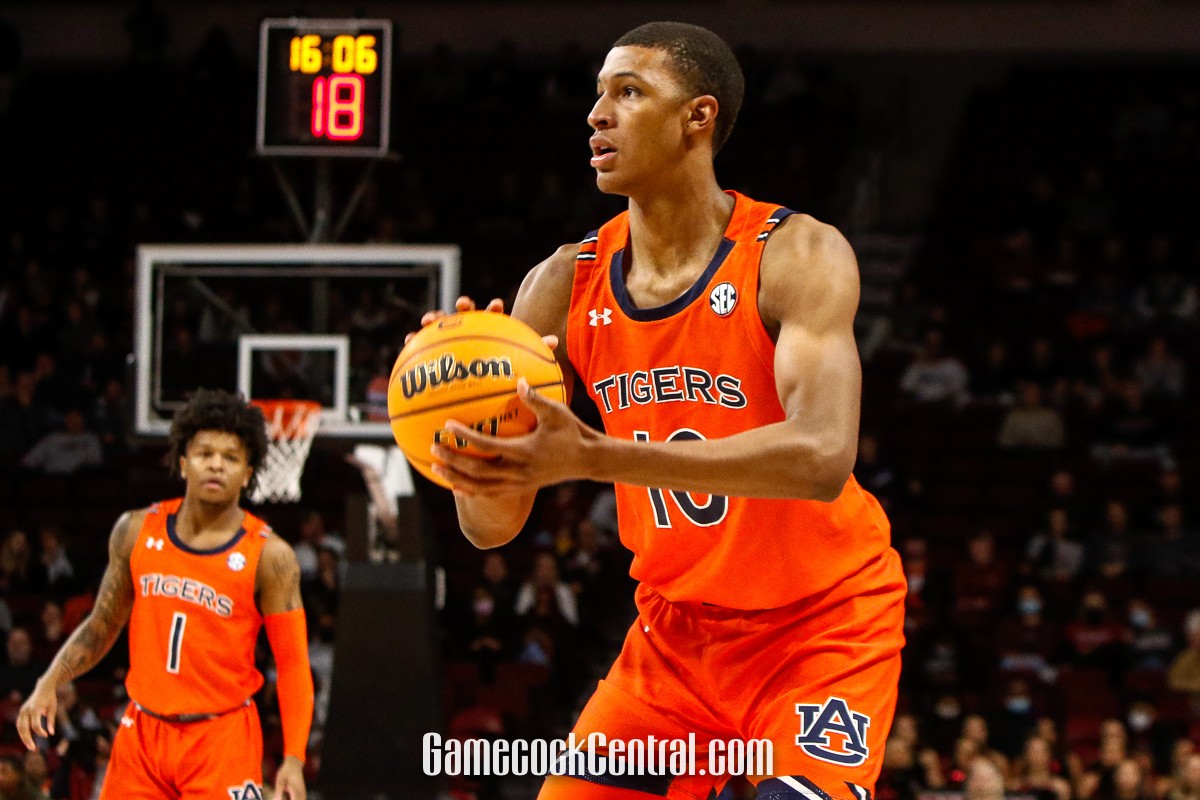 Photo by Gamecock Central
Surprisingly, Jabari Smith, Jr. slipped to the Rockets at number three.
No one saw it coming...except gamblers. For weeks leading up to Thursday night's NBA Draft, it was a foregone conclusion that Auburn's Jabari Smith, Jr. would be taken number one by Orlando. It made sense. Smith is a remarkable combination of size (6'10" with at 7'1" wingspan), tenacious defense and outside shooting ability — he shot better than 40 percent behind the arc in his freshman year. He is also only 19 years old.

But, in the days leading up to the draft, the Vegas betting odds began shifting. Duke's Paolo Bachero, the guy most thought would go to the Rockets at number three, shot up the betting boards and became the odds on favorite to go first. It wasn't until Thursday night just before the draft began that it was confirmed Banchero would wind up with the Magic.

That left Oklahoma City on the clock at number two. There were three big men considered all potentially number one in the draft with Banchero, Smith and Gonzaga center Chet Holmgren. The latter, a rail thin "unicorn" who can handle, shoot and defend at the rim. Many Rockets fans fretted that while they would love to have Smith, he would likely be snapped up by OKC.

Then, the Thunder took Holmgren and Smith fell to Houston. You could see the look of dismay for Smith, who said in pre-draft interviews that he didn't work out for Houston because he didn't think he would slip past the second pick. Even more bizarre, Orlando never worked out Banchero. They pulled the ultimate slight of hand on the entire NBA, but it worked out for the Rockets who landed the supremely talented Smith.

The forward is a beast defensively, able to guard all five positions on the floor. More remarkably, he is a deadeye shooter from distance. Perhaps the best comparison is Chris Bosh, the former Miami Heat forward. His biggest weakness is his ability off the dribble, but with Kevin Porter, Jr. and Jalen Green, he won't need to be a shot creator. The fit for the Rockets seems nearly perfect.

Several players many expected to go sooner fell to the Rockets at 17 and, ultimately, they wound up with a guy they wanted in LSU forward Tari Eason. Eason, a 6'8" wing with a 7'2" wingspan is an absolutely stellar defensive player who can guard all over the floor. He only shot 35 percent from three, but has the potential to improve there. He has a great motor and projects to be a spark plug defender off the bench. He and Smith could prove to be a formidable defensive front line for one of the worst defensive teams in the NBA last year.

The Rockets moved their 26th pick to acquire the 29th selection and two future draft picks, while still managing to get another guy they targeted but thought would be gone in TyTy Washington, a dynamic guard from Kentucky who was projected as a lottery pick before a series of minor injuries caused him to struggle a bit his freshman year. He projects as an off guard who could eventually play the role of floor general for the second unit as well as score with his outstanding floater and above average midrange game.

All in all, it projects to be a very good night for the Rockets with three more picks, all 21 or under, who not only have legitimate NBA talent, but look like excellent fits with the Rockets roster as well. GM Rafael Stone clearly knocked it out of the park Thursday night and we'll get to see these guys soon as the NBA Summer League opens July 7.
California Privacy Policy California Collection Notice
Do Not Sell My Info
Use of this website constitutes acceptance of our terms of use, our cookies policy, and our privacy policy The Houston Press may earn a portion of sales from products & services purchased through links on our site from our affiliate partners. ©2022 Houston Press, LP. All rights reserved.