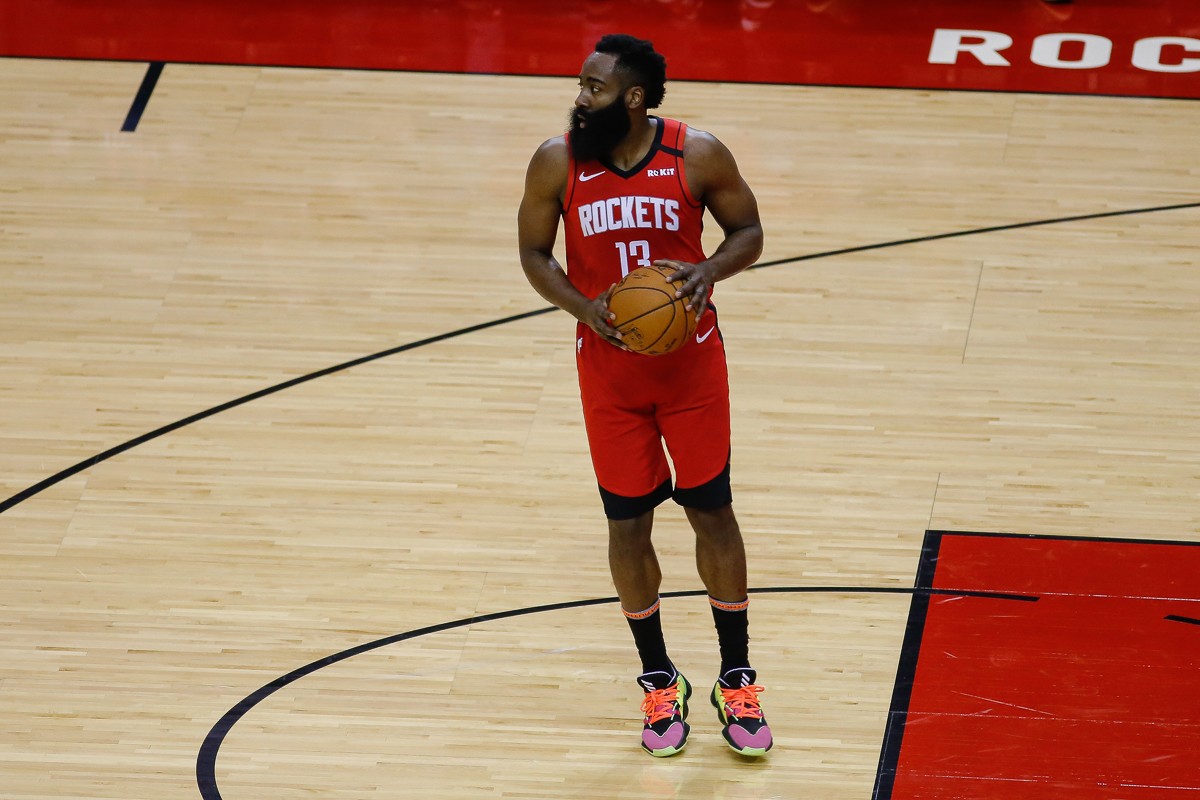 Photo by Eric Sauseda
James Harden was one of the greatest third overall picks of all time.
If there is a theme in Houston sports for the year 2022, the Astros' collective greatness notwithstanding, it is the Year of the Rebuild. The Houston Texans finally kickstarted their rebuild with the trade of Deshaun Watson and what appears to be a stellar draft back in April, and now here come the Houston Rockets and tonight's NBA Draft.

After a 2021 draft that saw the Rockets bring in four new young players drafted in the first round, headlined by second overall pick Jalen Green, the team head into tonight slated to add three more first round selections, with the headliner for this draft class being the third overall pick, widely expected to end up being Duke forward Paolo Banchero.

Like any draft slot, the third overall pick has its history of franchise saving this and massive misses. If we were to find the gold standard in each of those categories, there are plenty fo reasons for hope and fear. So let's look back at the history of the draft, and we will use the greatest third overall pick of all time, Michael Jordan in 1984 as the starting point. Since 1984, here are the four best and four worst third overall selections in the NBA Draft:

PAU GASOL, Memphis Grizzlies, 2001
In 2001, the first four picks were all either straight out of high school — Kwame Brown, Tyson Chandler, Eddy Curry — or drafted from overseas, which was the case with Gasol. While Chandler carved out a nice career for a couple decades, Gasol wound up becoming an All Star in Memphis, and then saw his career vault to the next level as the Robin to Kobe Bryant's Batman on the two Laker title teams in 2009 and 2010. Gasol ended up averaging 17 points per game over 18 NBA seasons, all while clocking over $225 million in earnings.

CARMELO ANTHONY, Denver Nuggets, 2003
The 2003 was the antithesis of the 2001 draft. Whereas the top of that draft was largely just Gasol with a slew of busts and enigmas, the 2003 draft saw a top five that will end up with four Hall of Famers — LeBron James, Chris Bosh, Dwyane Wade, and Anthony. Anthony was the third overall pick, fresh off a national championship in his one season at Syracuse. Nearly 20 years later, Anthony is still active and getting buckets for the Portland Trail Blazers after a prime era which saw him make the All Star Game ten times, and a career in which he has made almost $265 million.

JAMES HARDEN, Oklahoma City Thunder, 2009
Harden was drafted in 2009, as the third key piece of a young core which included Kevin Durant (second overall pick in 2007) and Russell Westbrook (fourth overall pick in 2008). Harden spent his three seasons in OKC coming off the bench as one of the league's top reserves, but it was a trade to Houston in October 2012 that unleashed one of the greatest scorers in the history of the game. Since that trade Harden has made ten straight All Star games, garnered first team All NBA honors six times, and won the MVP in 2018.

JOEL EMBIID, Philadelphia 76ers, 2014
After missing the entirety of his first two seasons after being drafted in 2014, Embiid has turned into arguably the best big man of this era. Embiid has made the All Star team five straight times, and has found himself firmly in the league MVP conversation in each of the last two seasons. In 2021-22, Embiid won his first scoring title. Now, it's incumbent upon Embiid, teamed up with Harden, to take the Sixers to the next level and make a deep playoff run to the NBA Finals.

CHRIS WASHBURN, Golden State Warriors, 1986
Washburn was, in a way, a walking microcosm of the 1986 draft, a draft which saw just 5 of the 24 first rounders play a double digit number of seasons. Of course, the biggest tragedy of this draft was Celtics forward Len Bias, the second overall selection, dying of heart failure from cocaine use. Of the players in this draft who wound up seeing the floor, Washburn was the most notorious bust, having played just two seasons in the league, and running into cocaine issues of his own.

DENNIS HOPSON, New Jersey Nets, 1987
Of the top 13 players taken in the 1987 draft, only one failed to play a number of seasons that reached into the double digits, and it's Hopson, who played just five seasons before flunking out of the NBA with a pedestrian 10.9 points per game scoring average. Exacerbating this mistake by the Nets was the fact that four of the next eight picks included future All Stars Scottie Pippen, Kevin Johnson, Horace Grant, and Reggie Miller.

DARIUS MILES, Los Angeles Clippers, 2000
The 2000 draft was about as nondescript and underwhelming a group as we've seen in the history of the sport, with just two combined All Star Games among ALL the draftees (Kenyon Martin and Michael Redd, each with one), so Miles' being one of the biggest busts is somewhat muted in that there weren't many other great alternatives for the Clippers to take, in retrospect. However, a bust is a bust, and Miles spent just eight seasons in the league, averaging a mundane 10 points per game.

ADAM MORRISON, Charlotte Bobcats, 2006
Morrison's collegiate career at Gonzaga ended with a loss to UCLA in the NCAA Tournament. Here is the video of the waning seconds of that loss. Fast forward to 3:35 and check out Morrison's bawling after the loss, laying face down in the middle of the floor:
This should have been a red flag for any team selecting Morrison. There is no crying in basketball! Morrison lasted three seasons in the NBA, but hopefully wherever he is today, his barely-reached-puberty mustache lives on.