The Impressionists Get Immersed 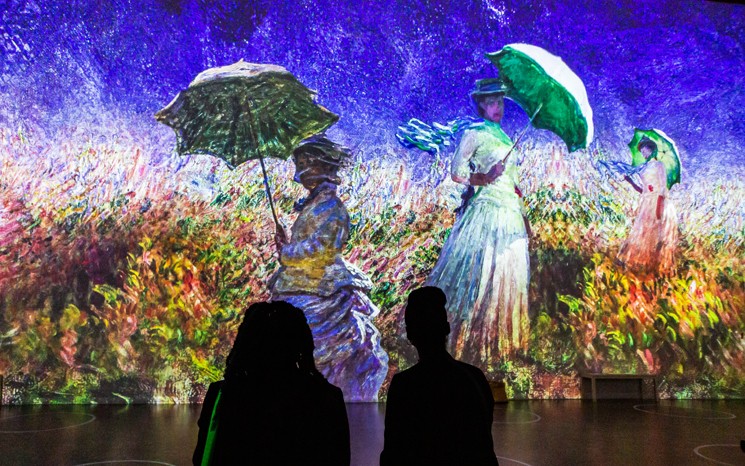 Photo by Patrick Hogdon
Scene from "Immersive Monet."
Ships toss violently upon stormy seas while lights flicker amidst the sound of waves crashing against their hulls. Flowers bloom and burst with color in gardens soundtracked to soothing string instruments. Drinkers and dancers exude the energy and high spirits of Parisian nightlife in the late 19th century to the can-can.

Leisha Bereson, VP of Marketing for Impact Museums.
Photo by Bob Ruggiero
All these images, along with a whirlwind tour of theaters, hot air balloon rides, buildings, beaches, forests and villages. It’s all part of the multi-media Immersive Monet & the Impressionists, the latest in string of “Immersive” events which aim to present classical works of art in a visually vibrant and animated setting.

“There’s a whole breadth of artists here telling the story of the industrialization of Paris and modern-day life. And challenging the norms of what was then considered art,” says Leisha Bereson, VP of Marketing for co-producers Impact Museums.

“The general appeal of the brushstrokes is meant to evoke an emotion, and people are drawn by vibrant colors. It’s hard not to love something like this where you feel the movement,” she continues. “And this [event] is a visual spectacle that envelops people. You’re not just looking at the art, you’re standing inside of it and absorbing it with your eyes and your ears.”

The projections in Immersive Monet comprise 1.2 million frames of video projected across four tall walls—and occasionally the floor—across 500,000 cubic feet. In addition to Monet, works by August Renoir, Edgar Degas, Mary Cassatt, Camille Pissarro, Édouard Manet, Toulouse-Lautrec, J.M.W. Turner and others are featured, some outside the realm of Impressionism.

Though now considered the Rock Stars of Painting with familiar-to-the-masses names and works which are just as often adorning tote bags, posters, and drink coasters as museum walls, the Impressionist started off as fairly rebellious souls back in 1874. That’s when a group of them held their first exhibition in Paris, independent and apart from the more accepted Salon de Paris.

Scene from "Immersive Monet."
Photo by Patrick Hogdon
In fact, “Impressionist” was considered a derogatory word in the art world, describing the purported rushed and unfinished look of the paintings. Themes and inventive depictions of light, nature, and then-contemporary topics were dominant. One of the more effective sections of the Immersive experience is a graphic bombardment of French newspaper and magazine headlines about the artists and their exhibitions, cut fast to a cacophonic score.

It certainly impressed a couple of media preview attendees a bit closer to French art and culture than most. “I liked it because it combined traditional Impressionism art with Modernism, and the music really [aided] the immersive experience. Along with the red wine!” laughs Bettina Gardelles, Cultural Attaché for the French Consulate General of Houston.

“And I think this is great for children because it’s different than what they would see going to a museum. There’s been a lot of enthusiasm in [Houston’s] French community for this,” adds Jane Buckner, the Consulate’s Press Officer.

Scene from "Immersive Monet."
Photo by Patrick Hogdon
“I think Americans know more about Impressionism than the French themselves!” Gardelles adds. “They were also more ready to buy the works, and that’s why a lot of them are in this country.”

Co-producers Impact Museums and Lighthouse Immersive are also the creative force behind Immersive Frida Kahlo and the original Immersive Van Gogh. The latter will continue to run concurrently with the Monet experience in the same venue of Lighthouse ArtSpace Houston.

Bereson hints that the company is currently working on other Immersive experiences outside of paintings that include sports, music, and even the riches and treasures of King Tut. But back to Monet, Bereson says her personal favorite segment is the one which takes viewers up in the skies above France on a hot air balloon ride.

“I know that might sound strange, but it’s really fun,” she sums up. “And that’s what I love about this, it makes you experience the art rather than just look at it.”

Immersive Monet & The Impressionists runs through August 14 at Lighthouse ArtSpace Houston, 1314 Brittmoore. For information and tickets, visit ImmersiveMonet.com. $29.99 and up.
California Privacy Policy California Collection Notice
Do Not Sell My Info
Use of this website constitutes acceptance of our terms of use, our cookies policy, and our privacy policy The Houston Press may earn a portion of sales from products & services purchased through links on our site from our affiliate partners. ©2022 Houston Press, LP. All rights reserved.