Reviews For The Easily Distracted:
Minions: The Rise Of Gru 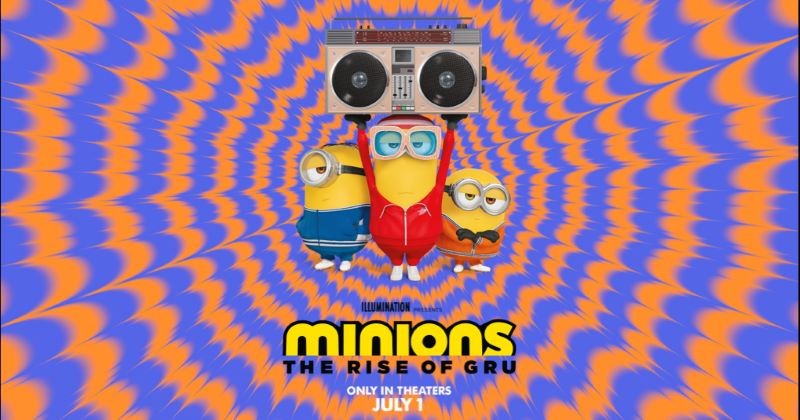 Describe This Movie In One That Mitchell and Webb Look Quote:


FRITZ: Hans, are we the baddies?

Rating Using Random Objects Relevant To The Film: 2 bitter yellow pills out of 5.

Better Tagline: "I hope Michelle Yeoh got a dump truck of money for this."

Not So Brief Plot Synopsis: Young Felonious Gru (Steve Carell) is as excited as one can be for his audition to join the Vicious 6, the world's foremost assembly of supervillains. Sadly (and predictably), the audition goes poorly. To prove himself, Gru steals a mystical stone crucial to their plans, leading Vicious 6 leader Belle Bottom (Taraji P. Henson) to pull out all the stops to hunt the wannabe bad guy. Gru's only allies? Ex-Vicious 6 member Wild Knuckles (Alan Arkin) and his faithful Minions.
"Critical" Analysis: As with just about everything else, when it comes to the Minions, there are two types of people: those who are perplexed at the appeal of their unintelligible tomfoolery, and those who appreciate the nuanced humor involved in repeatedly de-pantsing ambisexual homunculi.

Minions: The Rise of Gru is the second movie focused primarily on the yellow hench-things, and the fifth one overall in the Despicable Me franchise. Concentrating on the Minions, however, means we can avoid messy emotional entanglements concerning Gru's erstwhile girlfriend Lucy or the Girls, Gru's three adopted daughters, two of whom are voiced by actors (Miranda Cosgrove and Elsie Fisher) who probably won't be back for the next DM movie.

Unlike the first Minions, TRoG leans heavily on Steve Carell's return to the anchor character and his attempts to ascend the ladder of supervillainy. This would — on paper — seem like a good idea. Who wouldn't enjoy watching Gru and his loyal pencil erasers assume their rightful(?) place among the ranks of the world's worst?

Unfortunately, The Rise of Gru doesn't do much to answer the big question plaguing the entire series, namely: what constitutes a "villain," exactly? We're told Gru is one, because he dresses like a more suave Uncle Fester and the Minions gravitated toward him just like they have terrible figures throughout history. Here, he's just a kid. And at the outset, as he does things like taunting a fitness club with ice cream, we realize he's not so much a supervillain as he is a little asshole.

And not that anyone cares, but is Gru human? He's 11 years old here, but is basically to be the same age he was in the first Minions, which took place almost 10 years earlier. Yes, this is a cartoon about gibberish-spewing ovate goblins where humans morph into giant Chinese New Year monsters, but one does want a hint of narrative consistency.

Then again, who needs any of that crap when you have animated ass? Director Kyle Balda and screenwriter Matthew Fogel must have noticed how well those cheeky shots played in previous installments, so now each of the three main Minions (Kevin, Stuart, Bob) get their time to moon the audience, as does Gru himself.

Bad news, though: the fart gun does not make an appearance. Good news? It's replaced by a fart grenade, which Gru uses to get him and the Minions in a sold-out screening of Jaws (one assumes the same technology wasn't necessary for Jaws 3D).

A star-studded cast of villains, not that you'd know from hearing them speak.
Universal Pictures
Joining in for the hopefully sizable paycheck are Michelle Yeoh — playing kung fu Master Chow — and RZA as a biker who aids newest Minion Otto on his quest to retrieve the Vicious 6's stone. It's further testament to the amount of money this franchise has made for Illumination that they can secure voice talent like Jean-Claude Van Damme ("Jean Clawed"), Lucy Lawless ("Nunchuck"), and Danny Trejo ("Stronghold") to flesh out the Vicious 6 and give them each less than a dozen words of dialogue. Hell, Trejo doesn't even speak.

But there's stuff there for the adults, or adults who remember the '70s, I guess. Wild Knuckles looks like one of the Fabulous Furry Freak Brothers, and Kevin, Stuart, and Bob dress for the climactic villain battle in Bruce Lee's yellow jumpsuit from Game of Death (or Uma's from Kill Bill, depending on your vintage). Repurposed versions of songs like "Shining Star," "Funkytown," "Fly Like an Eagle," and "Black Magic Woman" will also help the grown-ups zone out through the proceedings.

Because what passes for a story here won't do much to engage you, unless watching a quartet of sexless and apparently immortal ... things getting the shit consistently kicked out of them does the trick.

Ultimately, it doesn't matter. With $3.7 billion in box office, the Despicable Me series is the most profitable animated franchise of all time, surpassing Shrek and the Toy Story movies. The Rise of Gru will only beef up that total (to say nothing of the 4th DM movie coming in 2024),