Which Actors Have Completed the Disney Trifecta? 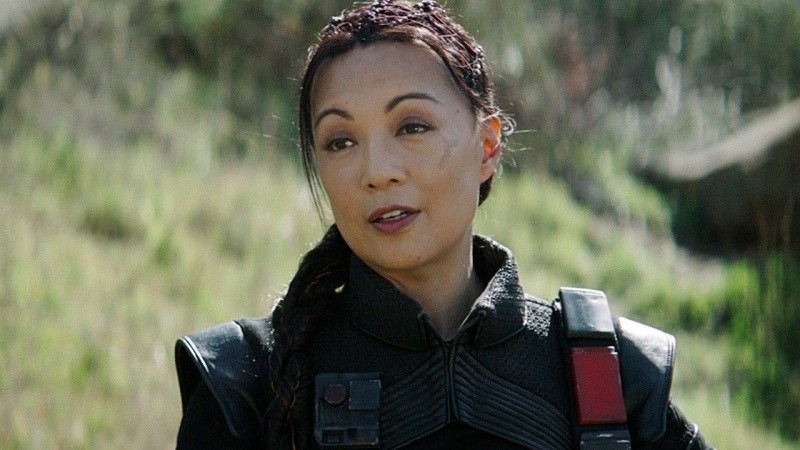 Screencap of Ming-Na Wen in Book of Boba Fett
Ming-Na Wen is one of the actors to make the Disney Trifecta.
With Disney controlling so much of modern popular culture, it’s unsurprising that some actors work for The Mouse repeatedly. This has led to a select few completing what I’m calling the Disney Trifecta. To accomplish this, an actor must appear in a Star Wars film or television show, as a Marvel superhero or villain, and in a Disney or Pixar animation vehicle, or a live action remake of one. It’s not exactly an EGOT, but it is interesting to see who has participated in all three of some of the biggest parts of entertainment.

First among equals is Ming-Na Wen, who is the only person on the list to play a Disney Princess (Mulan), a role she has reprised in several spinoffs and video games. She also starred as the Melinda May aka The Calvary on Agents of S.H.I.E.L.D. in all seven seasons, an original creation for the television show. Lately, she portrays the bounty hunter Fennec Shand in The Mandalorian, The Bad Batch, and Book of Boba Fett.

Unsurprisingly, the literal top movie star of all time makes the list easily. Samuel L. Jackson has starred as the superhero Frozone in the Incredibles films, Mace Windu in the Star Wars prequels, and Nick Fury in Marvel. While Wen gets extra points for being a Disney Princess, Jackson does pretty well for being both a Jedi and a legendary figure from Marvel comics who redefined the character by his portrayal.

In an interesting quirk, most of the people who score a Disney Trifecta are BIPOC. Lupita Nyongo has portrayed Raksha in the live action remake of The Jungle Book directed by Jon Favreau (more on him in a minute), as Maz Kanata in the Star Wars sequel trilogy, and Nakia in the Black Panther films. Look for her as a potential successor to T’challa after the death of actor Chadwick Bozeman.

Taika Waititi is one of modern cinema's outstanding talents, shining both in front of the camera and behind. As a voice actor, he’s appeared as Mo Morrison in the new Buzz Lightyear film, as IG-11 in The Mandalorian, and as Korg in various Marvel movies. With the later, he’s turned a very minor comic book character into something of a fan favorite. Waititi also almost makes a double trifecta on the production side, having directed episodes of The Mandalorian and the latest two Thor films. Unfortunately, he’s outclassed there by one man.

Jon Favreau has an incredible filmography. As an actor, he makes the Disney Trifecta for a minor voice role in The Jungle Book and Lightyear, two different characters in Star Wars (Paz Vizsla and Rio Durant), and in Marvel as Happy Hogan. He’s also the only person to direct for all three, having done The Jungle Book, Iron Man, and The Mandalorian. While Favreau rarely has the highest profile in roles, he makes up for it by doing a lot of them.

Donald Glover makes the Disney Trifecta easily, but the actual results are mixed. He played the adult Simba in the CGI Lion King, a young Lando Calrissian in Solo, and the man who would later become the Prowler in Spider-man: Homecoming (he voiced the same character in a main role in Sony’s Into the Spider-verse). It would be nice to see someone as talented as Glover get more work in bigger and better roles.

Now that the Netflix Marvel shows have been re-canonized into the MCU, Rosario Dawson makes the list. She played the fairy Nyx in the Tinkerbell films, Anakin Skywalker’s former apprentice Ahsoka Tano in The Mandalorian and an upcoming spin-off, and the Marvel hero Night Nurse in multiple seasons of the Netflix Defender shows.

It’s kind of strange the way Woody Harrelson makes the list. He had a major role in Solo, so no problem there. He played the villain Carnage in the Venom films, which are now MCU-adjacent. The weirdest one, though, is that he was in a fairly obscure Disney mix of animation and live action called Disney’s 60th Birthday that aired on NBC in 1988. A joint venture between Disney and NBC back when The Mouse was getting kind of desperate for ratings, the television movie featured various NBC sitcom characters, including Woody from Cheers.

No actor has even come close to as many different roles in the Disney Trifecta as Alan Trudyk. He’s been in Wreck-It Ralph, Frozen, Big Hero 6, The Good Dinosaur, Zootopia, Moana, Rogue One, Deadpool 2, Lego Star Wars, the live-action Aladdin, and Encanto. He also played the Marvel serial killer Arcade in the M.O.D.O.K. series, which isn’t MCU but is still neat.

When you’ve had over 600 roles, it’s probably not surprising that you’d make the Disney Trifecta. James Hong appeared in Mulan, Star Wars Rebels and Visions and, appropriately enough, as fellow Trifecta member Ming-Na Wen’s father in Agents of S.H.I.E.L.D.

The former Doctor Who recently entered the Trifecta by playing the role of Scrooge McDuck in the Duck Tales reboot. Before that, he starred as The Purple Man in Jessica Jones, and he had a minor part as Huyang in the Clones Wars series. Fun fact: Disney tried to acquire the rights to Doctor Who in the 1980s. If they had been successful, Tennant might be the only actor to have completed a Quadfecta.

Or not because Richard E. Grant is here, too (he was a Doctor Who villain). Grant has played bad guys in Logan and Rise of Skywalker, but took a break to be a fairly sympathetic character in the awful Disney Nutcracker film.

Last but not least is Donnie Yen. He makes the Trifecta on a technicality. He starred as a commander in the live action Mulan and Chirrut Îmwe in Rogue One, so his Disney and Star Wars roles are covered. His only Marvel role, though, is as a vampire in Blade II, where he also choreographed the excellent fight scenes. How the original Blade trilogy will work with the new reboot Marvel is doing is still up in the air, but for now we’re including Yen as a presumptive member of this elite class of actor.
California Privacy Policy California Collection Notice
Do Not Sell My Info
Use of this website constitutes acceptance of our terms of use, our cookies policy, and our privacy policy The Houston Press may earn a portion of sales from products & services purchased through links on our site from our affiliate partners. ©2022 Houston Press, LP. All rights reserved.