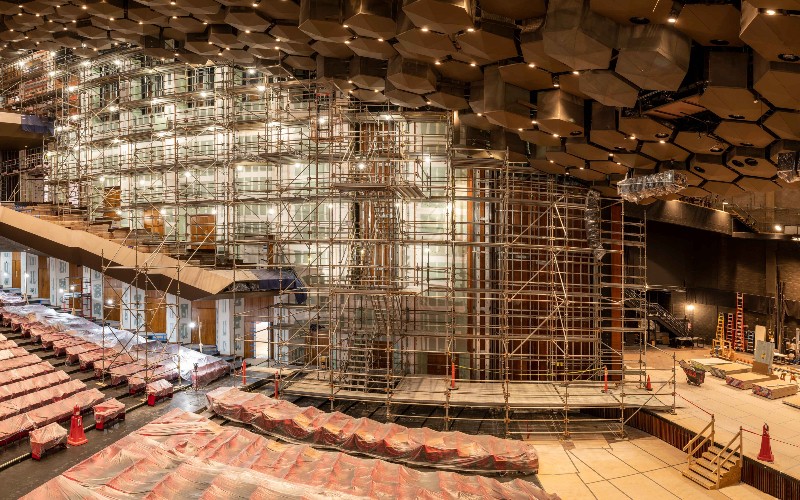 Photo by Paul Hester
Scaffolding decorates the audience chamber as Jones Hall undergoes a facelift.
Houston’s Theater District’s oldest building is getting a tune up. Jones Hall, the award-winning architectural stunner that opened in 1966, is undergoing a series of renovations that will breathe new life into the property benefitting artists, patrons, and the city alike. The Foundation for Jones Hall is spearheading the $50 million initiative to sculpt the "dean of downtown performance venues" into a 21st century space.

Once considered a marvel of its day, Jones Hall has housed many of Houston’s storied arts organizations and has welcomed a menagerie of famed talents through its doors. It remains the home of Houston Symphony and Performing Arts Houston; however, the needs and preferences of audiences and performers have evolved over its multi-decade history. So, too, must the hall.

“Jones Hall was one of the most technologically advanced theaters in the world when it was built. When I think about Jones Hall, I also think about Houston. Houston as a city is entrepreneurial. It's got big personality. It's generous and more than a little quirky. We have a beautiful but young history of builders, big business, of arts, and also of terrific philanthropy and generosity. And I think Jones Hall tells that story,” said Meg Booth, Performing Arts Houston CEO. “What a beautiful piece of history to be able to renovate and improve for all the citizens of Houston.”

Due to the busy performance schedule of the hall’s two resident companies – as well as guest organizations that rent the building – a series of four summers provided the most suitable time frame to begin the transition to a more modern performance space. The renovation – scheduled to last through 2024 – will come in two major phases. The first phase mostly tackled more of the behind-the-scenes refurbishments.

In summer 2021, the focus was on acoustic work, including custom construction with sidewall and alcove “infills,” using metal framing with four layers of sheetrock for acoustic density. This was covered by a wood veneer finish. The infills corrected echoes and sound delays that affected musical performances and allowed sound to be evenly distributed throughout the hall.

“One of the challenges with Jones Hall for musicians and audiences has always been the acoustics to some extent. While they've been good, they've been a little challenging for the musicians on stage and somewhat variable depending on where you're sitting in the hall. There are some spots that are terrific and other spots where it's a little bit more compromised,” said John Mangum, Houston Symphony’s executive director and CEO.

“The changes significantly improve the acoustic experience and help push sounds happening on stage out into the house, and they also improve the experience of the performers on stage by being able to hear each other from different locations on stage,” he added. 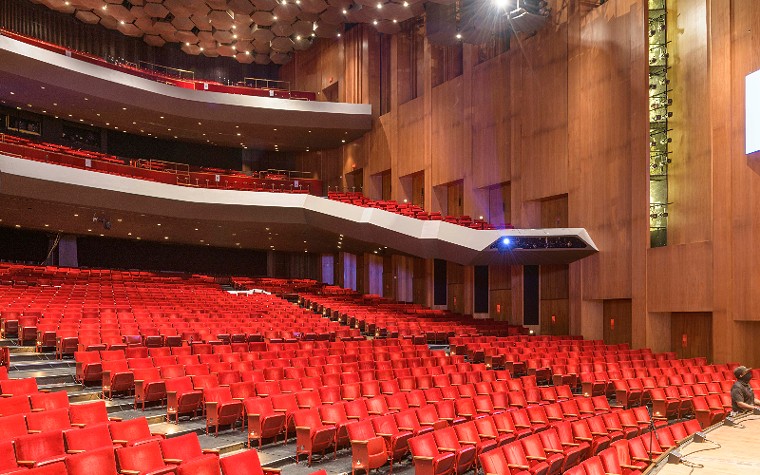 New seating arrangements will improve the audience experience as the refurbished Jones Hall.
Photo by Paul Hester
This summer heralds additional work, including refinishing the stage floor and rebuilding of orchestra pit floors and the area where they meet the stage; replacing hydraulic lifts for the orchestra pit with a new lifting system; replumbing and redirecting cable and conduit, while removing electrical equipment to further modernize infrastructure; and replacing the audio network, which consists of the equipment and data network that support amplified performances, to further revamp acoustics in the hall for musicians and patrons for superior sound.

The current plan will also add more backstage restrooms, upgrade the locker and changing rooms, and double the size of the greenroom.

Most of that work is “behind the curtain” work (the curtain is also being replaced, by the way) in order to set up the property in an intelligent way to continue more improvements, but starting next summer, more demonstrable work will take place that directly impacts the hall’s visitors.

“A big element of the patron experience is going to be the new seating and new circulation. Changes in the lobby and the flow of people will create more accessible seating for wheelchair bound patrons and new seats throughout the hall,” said Steve Friedlander, president of theater consultant group Auerbach Pollock Friedlander. “Completely new seats are going in which should be much more comfortable and attractive while still maintaining pretty much the same capacity as Jones Hall has today.”

In 2020, two new aisles were created on each side of the center orchestra section to improve accessibility and flow through the performing hall, but the seating layout will be rejuvenated in 2023.

“Originally the seating configuration in Jones Hall was what we what we refer to as a continental seating arrangement where there are only aisles at the far sides of the of the seating plan. So, you would come in one of the many doors and then walk all the way across in front of many seats to get to your seat. Back when Jones Hall was built that was seen as a as a good thing. Over the course of time, tastes have changed, and we now feel that seating layouts with intermediate aisles, which is more of a European model, will make circulation easier,” Friedlander said.

“Instead of going into multiple doors, you'll go into fewer doors, and you'll go across on a major open aisle and come down the intermediate aisles to get to your seats. That allows us to close off some of those doors, which also helps reduce the noise from the lobby coming into the room.”

Soundproofing the building's other areas is another element of the updates.

“We will be sound-isolating the loading dock. Currently, the dock opens directly onto the stage space. Having its own isolated space after the renovation is completed will allow us to load in or load out a show while we're rehearsing and performing another show on the stage. It will make that turnaround time between shows more efficient,” Mangum said. 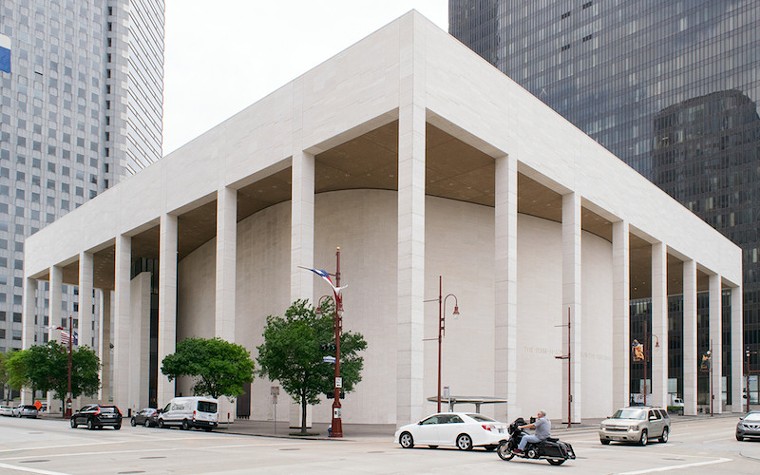 Jones Hall is home to the Houston Symphony and Performing Arts Houston.
Photo by Patrick Feller via Flickr
The finishing touches by 2024 will expand the lobby and restrooms. Expect expanded terraces in the lobby that will add room during intermission and create a space for smaller performances, receptions and other activities to enhance the goings-on of groups utilizing Jones Hall.

Additionally, the restroom facilities will be expanded, and new, relocated pathways will ease access to and from them. Further, the scheduled changes to the building reflect more accommodations in compliance with the Americans with Disabilities Act, making the building more user-friendly to all.

While much is taking place inside the building, the group took special care to not change Jones Hall's edifice which has long served as a hallmark of Houston’s arts and culture scene.

Booth sums up the building’s significance eloquently, saying, “Jones Hall, being one of the oldest theaters in Houston, has such a special heart to the citizens of this city and to this community. The stories that I've heard of first dates, wedding proposals, the number of schools that held graduation ceremonies in this building, the mayoral inaugural celebrations that took place in this building…and then of course, the arch where Jones Hall gives us the ability, just as human beings, to laugh and cry together and to simply feel good celebrating the artistry of human existence…it is such a magical place. It is rewarding to bring it back to the glory that it once had and deserves to continue to have for many, many generations.”

The multi-phase renovation plan is funded with private donations from the Foundation for Jones Hall’s capital campaign, “Overture to the Future,” which has already raised more than $25.5 million in support of the projected $50 million renovation total in less than one year. Donors to date include an anonymous donor, Houston Endowment, the Robert and Jane Cizik family, Janet Clark, Nancy and Chuck Davidson, the Shirley and David Toomin family, and the City of Houston. Jones Hall is owned by the City of Houston and managed by the Houston First Corporation, with Foundation for Jones Hall managing backstage operations.

Jones Hall for the Performing Arts is located at 615 Louisiana Street. For more information, visit houstonfirst.com/venues, houstonsymphony.org, performingartshouston.org, or visithoustontexas.com/theater/venues/jones-hall.
California Privacy Policy California Collection Notice
Do Not Sell My Info
Use of this website constitutes acceptance of our terms of use, our cookies policy, and our privacy policy The Houston Press may earn a portion of sales from products & services purchased through links on our site from our affiliate partners. ©2022 Houston Press, LP. All rights reserved.