The event was held at Hugo Ortega's fine dining coastal Mexican restaurant, Caracol. The nationwide chef series was first held in New York City July 15 before coming to Houston July 19.  The event will move to  Miami and Denver over the next few months with different chefs.

Moderated by Chef Hong Thaimee, the theme for the series is American Dream: Building Your Business from the Ground Up. Thaimee is the owner of Thaimee Love, a 30-seat Thai restaurant in New York City which shares a kitchen with its take-out concepts Pad Thaimee and Thaimee Blossom. Born in Thailand, she left the country after the 2004 tsunami and moved to New York City, according to Zagat, so she was the perfect choice to host a discussion with two female chefs about the American dream. Three chefs, three culinary points of view.
Photo by Lorretta Ruggiero
Thaimee was an engaged interviewer, drawing personal stories from Grumman and Garcia about their successes, failures and future dreams. She jokingly said she learned her interviewing skills from "Oprah." She began with Garcia, who explained how her culinary career was ignited by working in her family's restaurant. Garcia's parents were both in attendance that evening and Top Chef viewers will remember that her father, Joe Garcia, appeared on the episode filmed in Galveston.

Grumman, from California, came to Texas by way of Austin, following a love interest. She came to Houston to take on the role as executive chef at the C. Baldwin Hotel in 2019, a job she left in 2021 in order to compete on Top Chef. Currently, she has branded herself as The Fierce Chef and operates a bread business, Sasha's Focaccia. She has begun shipping her products nationwide. Though she enjoys going back to California to see her friends and family, Grumman said of Houston in the interview, "I have incredible friends here. I'm always happy to come home and I feel like that's a pretty good indicator that Houston is home."

During the discussion, Thaimee posed a question to the chefs, "What is American food?" Both Grumman and Garcia were quick to champion the diversity of Houston's cuisine and the nation's immigrant history. Garcia said "Growing up, I couldn't really see the difference of oh, this is Mexican food or this is Asian food. For me, it was very organic. Like, oh this is what we eat in Houston." When she mentioned that people often say "pho is the dish of Houston," Thaimee chimed in, "of which you have the best." The NYC chef also divulged that she had eaten at four Houston restaurants that day, prior to dinner at Caracol. She was particularly effusive about Bellaire's Chinatown. 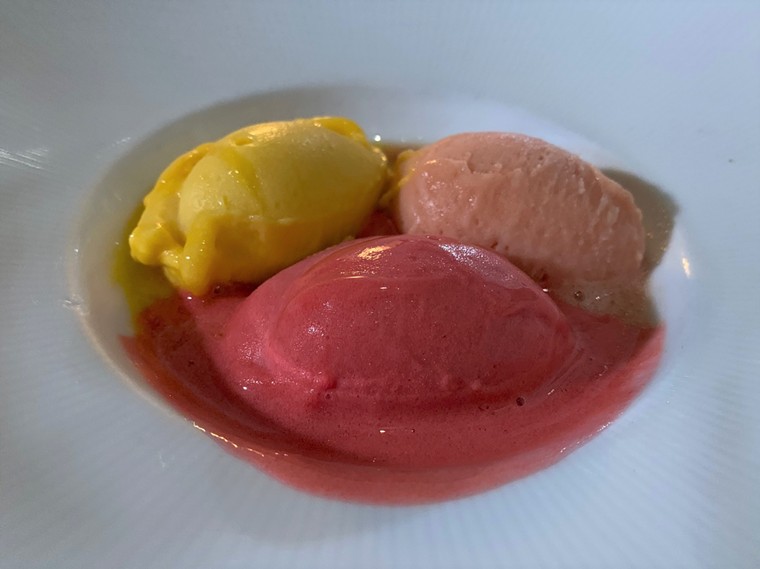 The sorbet trio was a delicious finish to the evening.
Photo by Lorretta Ruggiero
During the evening, attendees were treated to a four-course meal from the Caracol kitchen which included homemade chips and salsa plus wood-roasted Gulf oysters topped with chipotle butter and toasted breadcrumbs. The pork taquitos had a vibrant avocado-tomatillo salsa that gave a freshness to the crispy fried tortilla. For an entree, I opted for the cast iron-cooked redfish with another tomatillo-avocado salsa, much thinner than the taquito version and a little spicier. Chef Garcia expressed her happiness with the pan-roasted duck served with fig mole. While the majority of guests ordered the churros for dessert, I wanted something refreshing and light, so I chose the sorbet trio. It was a wise decision and despite being full, I ate all three quenelles of fruity sorbet, especially enjoying the mango version.

While we ate our last course, the conversation continued. Both Grumman and Garcia talked about their travels and the effect that other cultures have had on their culinary styles. Garcia said that seeing what can be done in other cultures affects her own style. When she mentioned that here in America the culture can be cutthroat, Thaimee asked, "Why does it have to be cutthroat?" Garcia replied, "Because we're insecure. People don't see that there is room for everyone."

While Garcia is a Houston native, her heritage is Mexican and Salvadoran. She blends that background with her passion for Southeast Asian food, having worked under Chef Anthony Ricco at Jean George's Spice Market, a fact she shares in common with Thaimee, who also worked with Ricco at Spice Market. Garcia's travels to Thailand also influenced her cooking style.

Sasha Grumman (standing), Evelyn Garcia (center) and Hong Thaimee take a quick break.
Photo by Lorretta Ruggiero
Grumman credits her time in Italy at culinary school, mixed with her Sicilian roots, for her gastronomical direction. However, despite heading to the beach occasionally when working in Rome, her job was pretty tough. She said, "A lot of people don't know that Roman food is a lot of seafood. The beach is only an hour away. My job was 14 hours of cleaning, deveining and putting shrimp on tiny little skewers. My fingers were destroyed, but I loved it. I loved the structure and the movement of the kitchen."

As women, the chefs also talked about their difficulties rising in a world once heavily dominated by men. And they each had different approaches. Garcia said that she put up a wall around her, ignoring the comments, keeping her mind focused on her job. Grumman was more extroverted in her dealings with the boys club of the kitchen.

Both Grumman and Garcia have been very busy since their Top Chef appearances, doing pop-ups and events throughout the city. Garcia is partnering with Chef Henry Lu, who was also at the BentoBox event, to open their restaurant Jun at 420 E. 20th in the Heights, hopefully by the end of the year. Grumman one day hopes to get some land and open a culinary getaway modeled on her experiences in Italy.

With bright futures ahead for these culinary superstars, Houston is the lucky city that Grumman and Garcia call home.
California Privacy Policy California Collection Notice
Do Not Sell My Info
Use of this website constitutes acceptance of our terms of use, our cookies policy, and our privacy policy The Houston Press may earn a portion of sales from products & services purchased through links on our site from our affiliate partners. ©2022 Houston Press, LP. All rights reserved.