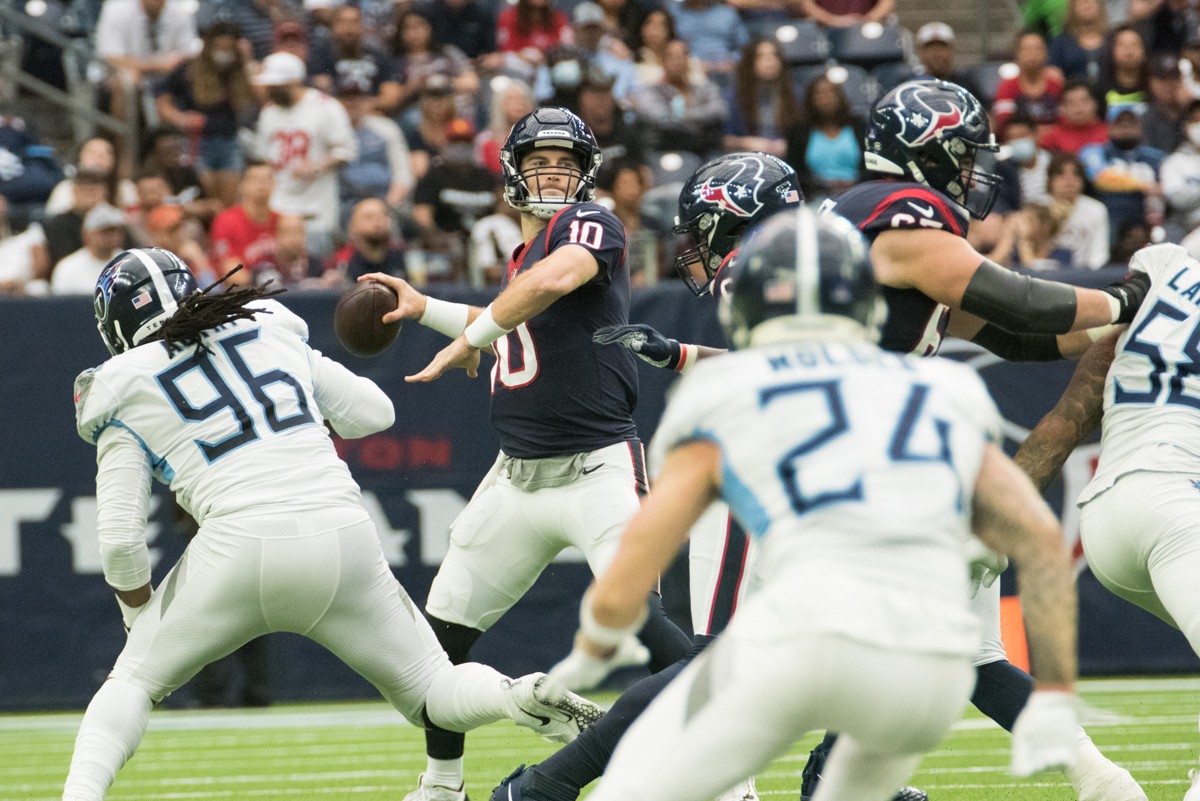 Photo by Jack Gorman
Lovie Smith said Davis Mills would get his vote as captain of the Houston Texans.
For the 21st time in team history, the Houston Texans kicked off training camp, amid sweltering heat and a somewhat tepid crowd on Friday (Saturday's crowd was much bigger and seemed louder, too), with hope that they've bottomed out in the drama department and are headed upward in the "watchable football" department.

Training camp this season, in the first year under new head coach Lovie Smith, seems to be a much more efficiently run ship, in that the team has almost no down time during practice, and Smith was able to get all the work done that he deemed necessary in just 90 minutes on Days 1 and 2. We will see if the coaching staff decides to run longer this week, as Monday, Tuesday, and Wednesday are all slated to be padded practices, an environment that lends itself much more to intense player evaluation.

For now, with players running around in just jerseys, shorts, and helmets (and some goofy extra outer layer of helmet padding on the heads of the offensive and defensive linemen), we are left evaluating some less physical (but still important!) endeavors around training camp. Here we go:

The most popular noun in the building is not a person, it's an item.
With all due respect to general manager Nick Caserio, whose approval rating right now is through the roof, according to this fan survey from Rivers McCown, the most popular noun in the building for the Houston Texans is the scintillating new Battle Red helmet, which the team rocked for the first time on Saturday at the Day 2 practice. Here was an informal video survey of the players on what they think of the helmet:

As you can see, the Battle Red helmet's approval rating is roughly 100 percent, give or take zero percent. By the way, the best parts of that video were Texans sideline reporter John Harris gruffly saying "He won't wind up in the video anyway" and then winding up in the video, and then tackle Laremy Tunsil eating a giant breakfast sandwich as he walked to the practice field. Let the narratives begin!

The team has put all of its 2022 eggs in the Davis Mills basket
Lovie Smith not only included effusive praise for Mills in his opening statement at camp, but he went on to say that Mills would get his vote right now as captain of the offense. Here is an audio cut-up of Smith's various praises for Mills on Friday:

For what it's worth, it was hard to get a great gauge on Mills' progress as a player in the two practices this past weekend. Until there is a padded pass rush facing off against a padded offensive line, any accurate assessment of offensive play is a little tricky. There were a LOT of check downs from Mills, which can be read as the defense doing its job in coverage, Mills being super careful with the football, or both. Of all the developments in camp, seeing if this team's strong faith in Mills is real or a case of "love the one you're with" is at the top of my list.

Brandin Cooks is the real deal
When the career of Brandin Cooks is said and done (and we are still a long way off from that, but stay with me here), it will be fascinating to see how he is viewed in Texans' history. He was brought here at one of the worst possible times, under the worst possible circumstances — three weeks into the COVID pandemic, three weeks AFTER the team traded DeAndre Hopkins, with Cooks viewed largely as a Jack Easterby "culture" acquisition. So it is admirable that Cooks has thrived in these two seasons (1,000-plus yards each year), and at camp on Friday and Saturday, he was catching everything in sight. Furthermore, the team locked him in for two more seasons, through 2024, so if this thing gets turned around, and the Texans start winning again, Cooks will be viewed as a catalyst for that. His statistical ceiling is probably still just "third best receiver in franchise history," but if he is part of pulling the Texans out of the post-Watson quicksand, he will be beloved here.

This rookie class is already generating a lot of conversation
Let's start with the conversation that we all hoped we didn't have to have — wide receiver John Metchie III's leukemia diagnosis. A week later, everyone still seems to be in positive spirits, so that's good. Metchie addressed the team before the first camp practice, which had to be very emotional, as Metchie is already very popular among his teammates. As for the rookies who were able to get on the field, Derek Stingley and Jalen Pitre made positive impressions in the secondary. Stingley, who is recovering from a foot injury during his final season at LSU, should be ready for the opener against the Colts. Guard Kenyon Green was running with the second string, which generated a lot of concerned conversation. For what it's worth, Lovie Smith doesn't seem too concerned.