How The Wolf Survived: The Timelessness of Los Lobos

Photo by Piero F. Giunti, courtesy of Red Light Management
Los Lobos
Los Lobos' latest Grammy-winning album, Native Sons, features some classics. They're songs we hope to hear when the band performs at Heights Theater August 10. Steve Berlin is the band’s saxophonist, a multi-instrumentalist and producer who understands the essence of a good song. There should be a timelessness to it and that’s the aesthetic Los Lobos has aspired to over its nearly 50-year history, he said.

Native Sons features one original song and 13 covers of Los Angeles bands, acts like the Beach Boys, Thee Midniters, Jackson Browne and the Blasters, the outfit Berlin left in 1984 to join Los Lobos. Those groups were instrumental to the East L.A. band’s foundation. We were excited to hear “The World is a Ghetto” by WAR and Buffalo Springfield’s “For What It’s Worth” on the track listing and asked if those songs were chosen for inclusion to address current world events.

“You can’t be an artist and pretend that we’re not living in challenging times. By all means, there was a conscious choice,” Berlin said of the song selections. “Obviously, we’re choosing covers, we’re not writing the lyrics, but we had the same thought, these songs have the same resonance now that they did then, if not more so now just because the moment that we’re in seems so challenging.”

It's not hard to see the factions in the country. It’s on the never-ending news cycle, our social media feeds and even in the audiences Los Lobos have played to recently. Are there songs that address social issues in the band’s catalog?

“I’d like to think so. We try not to be particularly overt about our voices,” Berlin said, but noted Los Lobos has a track record of supporting political candidates and causes. “I think musically it’s always interesting to me that people sort of interpret songs the way that they want to and I think that’s important, that everybody should hear the song for what it is and not necessarily what the author had in mind. Sometimes it’s a completely different thing. It’s definitely in the process, but we try not to make it, ‘This is our song about global warming.’ We’re never quite that overt.”

The band formed in 1973 and still features most of its founding members, guitarists and vocalists David Hidalgo and Cesar Rosas, drummer Louie Pérez and bassist Conrad Lozano. They leaned on their roots and introduced listeners to their brand of Mexican folk rock at a time when punk music was breaking. Back then they played shows with bands like Circle Jerks and Public Image Ltd., so we asked whether Los Lobos considered any punk songs for Native Sons.


“There were a few on the list,” Berlin said. Because of the lockdown, the band recorded the album in a much different fashion than usual, working intermittently on it for close to a year. “One day I counted up the songs and we had 14 songs already. Had we been keeping an eye on the list along the way I think we probably would have figured out a way to do a punk song just because it was such a huge part of our development as a band.

“The other thing too, for us, is finding something we could do without sounding silly,” he added. “We’re not really a punk band so we’d need something that was translatable to the sound and the people that we are now. We wanted to make these songs sort of our own as well. There were a couple on the list but we never really got too far with it.”

We can respect the artist’s take, but it’s hard to imagine anything Los Lobos related as “silly.” It’s not just because they’re a veteran band or because they’ve carried the torch for Latin rock acts for so long, but chiefly because they’re so musically adept. Their musicianship makes it hard to fathom they’d create anything that might sound “silly.”

“The one thing about being around as long as we have is we’ve outlived almost every trend, every flavor of the month, every ‘bubble,’ if you will,” Berlin noted. “When Ricky Martin was happening it seemed like the whole world was turning Latin. That kind of somewhat faded a little bit. I think the overriding stuff is to make music that has timelessness built in. If you follow trends, nothing will make you seem sillier or less relevant than trying to chase something that seems like it’s happening in the moment. A lot of this stuff just comes and goes. All of it comes and goes, really. The only thing that really remains is quality work. We just try to make the records that make us happy.”

With Los Lobos, maybe the job is made simpler since it’s roots music, planted from a seed long ago but still bearing delicious fruit for listeners. From their breakthrough full-length debut How Will the Wolf Survive? to last year’s love letter to L.A., there’s a seamlessness to the discography.

“If you think about it, the thing with Native Sons, all those songs still sound really good, right? That’s the point. Even though they’re 50, 60 years old, they still resonate, they’re still solid. They don’t sound like something that was silly and of that particular moment. They’re still powerful songs. I think that’s really what we strive for, trying to get somewhere close. We’re not saying we’re the equal of Buffalo Springfield or WAR or anything like that, but we hope to be in the conversation somewhere, I guess.”

The album is a loving homage to the bands that inspired Los Lobos. Looking around now, does Berlin see his own band’s influence on new acts?


“Yeah, to a certain extent, I think, especially in East L.A. where the guys grew up,” Berlin said, though he noted the newer bands lean more on R&B than Los Lobos’s blend of folkloric, rock, blues and country music. “If the question is will there be another Los Lobos of the bands that are out there, I don’t know. We were the product of a specific set of influences.

“We kind of grew up, coming of age listening to what is now called classic rock. We were listening to it the first time,” Berlin said with a laugh. “I think that range of influences created us. I don’t think bands starting today would have the same influences. I do want to stress I’m excited about a lot of the young bands that I’m hearing, specifically from East L.A. and from South Central. There’s some stuff happening in L.A. that’s exciting and that wasn’t the case as recently as four, five years ago, I don’t think.”

The tour for Native Sons stretches into 2023 and the band performed some hailed shows recently with Tedeschi Trucks Band. Even with 50 years of tours to cull from, touring in 2022 is probably most difficult, Berlin said. Los Lobos doesn’t need news stories or graphics from the CDC to know the country’s present response to the ongoing threat of COVID. They just look into the crowds of the cities they’re playing to know.

“I would say this – right now, there’s a set of challenges that no one’s ever dealt with before. There weren’t touring bands in 1919, the last time we had a pandemic, so certainly going, touring, being in crowds, the tour that we’re on right now had a couple of COVID scares. People got sick. It’s a challenge. You’ve just got to be smart.

“It’s kind of interesting, as you go around the country – the south in particular, they’re over it. Not a mask to be seen anywhere. As we move west, people are a little bit more conscious. We’re in Denver right now, going to California I have a feeling we’ll see a lot more people masked in the crowds. It’s definitely not gone away. As much as a lot of us would like to think that it’s done, it’s most definitely not, so we’ve just got to be careful and conscious.

“It’s a really interesting time. We’re happy that we’re able to do it, we’re happy that people are coming out,” he continued. “There was a time there, certainly in the beginning of the pandemic, we were wondering if we’d ever tour again, if it would ever be safe again. It’s definitely a unique moment in history and we’re just trying to do the best we can to keep our fans safe and keep each other safe and still get to share music live. We’re happy that it’s happening, but we’ve really got to be careful. It’s scary. It’s not going away yet.” 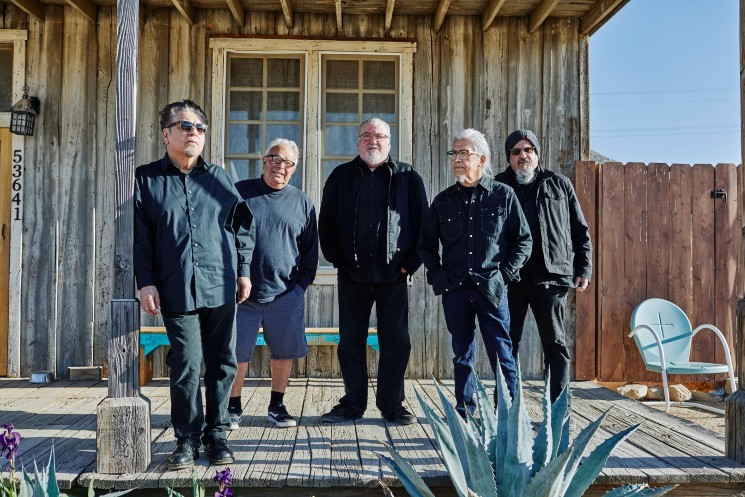 “Honestly, awards, they’re always lovely when they happen but we spend literally zero time thinking or worrying or concerning ourselves about it,” Berlin said. “What we’ve learned is you hang around long enough, good things could happen. Sometimes with us they have happened. We don’t have any control over that, we’re certainly not lobbying for it.”

We ask Berlin if he minds if we lobby for it. After all, Los Lobos’s fan base includes many Chicanos who heard cumbias and norteños in their households but not in the mainstream, not on radio or at the high school dance and certainly not on MTV. Los Lobos did that. Their rich music has endured and has been lauded. What we’re talking about is legacy and a measure of legacy for rock acts is inclusion in the Hall, founded by some of the very people who’ve championed Los Lobos over the years. Their inclusion could also address a shameful dearth of Latinos in the Hall. It would recognize the band’s timelessness.

“I’m serious, we spend zero energy on it. Like winning the Grammy this year. I was the only one that went because the guys thought we had no chance. They didn’t really think it was possible,” Berlin said. “Trust me, it’s a wonderful thing, it was a wonderful surprise, and if we get in the Rock and Roll Hall of Fame, that’s going to be wonderful. You know, we’re getting a Hispanic Heritage (Foundation) Award this year, that’s wonderful. We’re honored that people wanna honor us.

“As far as the Rock and Roll Hall of Fame, I mean, you know, one day maybe,” he added. “If it doesn’t happen it doesn’t happen, it doesn’t detract from the work or how we feel about what we’ve done. We know that we’ve done good stuff. We stand behind and we’re proud of everything we’ve done and I think that’s all you could ask from a 50 year career in the music business. I don’t think we made too many musical mistakes. Certainly, we’ve made our share of mistakes, but not that many musical ones. I think that’s the only thing we’ve ever asked from the world at large, is to let us do what we wanna do and we got that, so we’re happy.”

Los Lobos, Wednesday, August 10 at Heights Theater, 339 W. 19th. With special guest Nuevo. Doors at 7 p.m. for this all ages show. $38 and up.
California Privacy Policy California Collection Notice
Do Not Sell My Info
Use of this website constitutes acceptance of our terms of use, our cookies policy, and our privacy policy The Houston Press may earn a portion of sales from products & services purchased through links on our site from our affiliate partners. ©2022 Houston Press, LP. All rights reserved.