When we were young, most of us were preoccupied with image. The clothes we wore provided us an outlet to express ourselves, and many of us did so through Converse, studded belts and dark eyeliner — much to the chagrin of our parents.

Similarly, My Chemical Romance — one of the most celebrated emo outfits ever and arguably the biggest act to rebuff the genre — once went to great lengths for the sake of presentation. Each of the band's studio albums showcased a new sound, and that change was reflected in the group's onstage stylings.

MCR's reunion tour was supposed to come through Toyota Center in 2019, but it was delayed (and delayed again) due to COVID-19. Two and a half years removed from the height of the pandemic, the New Jersey rockers finally made it to the Bayou City.

The arena was packed to the gills with fans of all ages. Folks in their 40s who might have seen MCR in its infancy rubbed shoulders with kids who could have been in kindergarten when the band last released a proper record.

As the saying goes, emo's not dead. 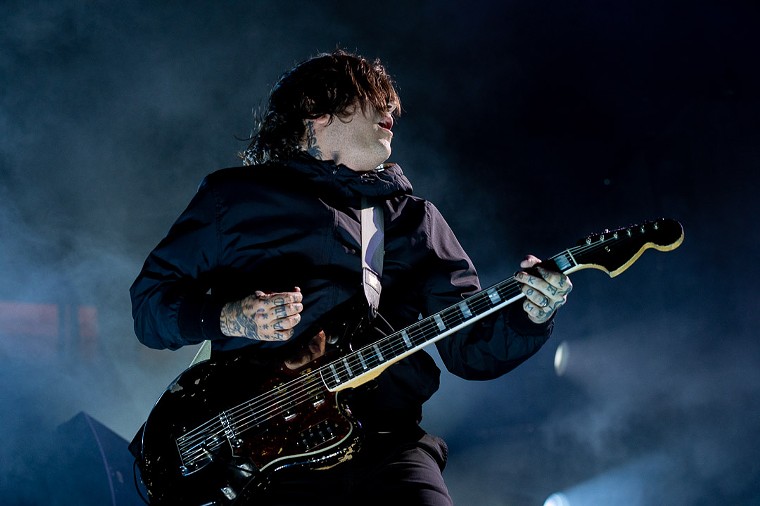 Frank Iero
Photo by Jennifer Lake
MCR’s set began with their latest single “The Foundations Of Decay,” a brooding callback to the group's debut record I Brought You My Bullets, You Brought Me Your Love. “Bury Me In Black," a beloved deep cut, came next, followed by the breakout single "I'm Not Okay (I Promise)."

Reunion tour set lists typically read like Greatest Hits albums, but not this one. Yes, “Helena” and “Welcome To The Black Parade” made the cut, but fans weren't twiddling their thumbs waiting for those tracks. Instead, just about everyone in the crowd, young and old alike, could be seen singing, dancing and moshing to "Vampires Will Never Hurt You" as if it were currently charting on Billboard.

Tuesday night felt like a victory lap for MCR. From the aggressive punk stylings of “Our Lady Of Sorrows” to the danceable poppiness of “Planetary (GO!)”; from the ominous ragtime of “Mama” to the anthemic optimism of "The World Is Ugly," the band's range was on full display, absent the extravagant outfits and all that eyeliner.

And while I wouldn't mind if the glitz and glam came back too, the band's image just doesn’t feel nearly as important anymore. We've all grown up a lot in the last few years, so as long as MCR continues to perform with the kind of aggression and passion they brought to Toyota Center on Tuesday night, this reunion tour could be the beginning of a new chapter.

Only this time, hopefully the next chapter won't be delayed for two years.