Bob Dylan Gets Tangled Up in Tunes, In the Best Possible Way

Photo by Jim Summaria. Creative Commons.
Bob Dylan onstage with The Band in 1974. Dylan's new book, The Philosophy of Modern Song, examines over 60 tunes by artists ranging from Johnny Cash to Little Richard to Nina Simone to Willie Nelson.
What to say about Bob Dylan’s literary output? He won a Nobel Prize in Literature in 2016, but that was for his lyrics. In fact, the Nobel committee recognized Dylan "for having created new poetic expressions within the great American song tradition." No, I’m talking about books here, words written for the page. 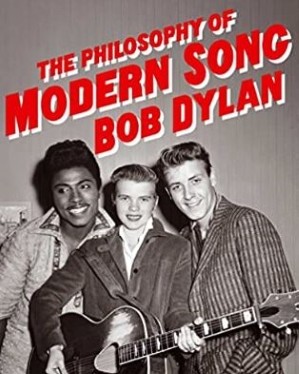 Book cover
There’s Tarantula (completed in 1966, published in 1971) a collection leaning heavily on stream-of-consciousness prose with little in the way of punctuation. Maybe the manual typewriter Dylan employed was missing some keys. And of course there's also Chronicles: Volume One, a “memoir” that stretches the boundaries of that particular term. When the book was released in 2004, some critics questioned its veracity. Some other critics chided their colleagues for missing the point, noting that Dylan is, if nothing else, a prankster of the highest order.

Which brings us to The Philosophy of Modern Song (Simon & Schuster, 352 pp. $45), a collection of short essays on 66 popular songs, ranging from “Tutti Frutti” to “Gypsies, Tramps, and Thieves.” The Eagles’ “Witchy Woman” is even in there – I shit you not.

Many entries include not only a focused essay on the song in question but a sidebar exploring a related tangent. Dylan’s musings on Carl Perkins’ “Blue Suede Shoes” are followed by a discussion of songs about shoes. “There are more songs about shoes,” Dylan tells us, “than there are about hats, pants, and dresses combined.”

Dylan’s “Theme Time Radio Hour” was a show that ran on satellite radio for three seasons, beginning in 2006. Dylan would pick a theme for each week’s show (e.g. “Weather,” “Mothers,” “Coffee”) and curate a playlist that gave him a framework upon which to hang pop culture history, snippets from old radio shows, and, of course, deep thoughts. Reflecting on an artist who passed on at a young age, Dylan says, “Some people die too soon. Others, you’re kinda hopin’.”

In the “Spring Cleaning” episode of TTRH, Dylan plays music by Howlin’ Wolf, Eric Dolphy, George Jones, and Igor Stravinsky, reads a poem by Sylvia Plath, and inserts housecleaning tips between tunes. The listener is sternly told, “Remember, don’t store your brooms on their bristles. It will destroy their shape and diminish their effectiveness.”

Bob Dylan received a Medal of Freedom from President Barack Obama in 2012.
Photo by Bill Ingalls. Creative Commons.
The Philosophy of Modern Song has much in common with “Theme Time Radio Hour.” From the start, Dylan demonstrates that his tastes are catholic, his knowledge immense, and his point of view singular. Case in point: Dylan’s analysis of “My Prayer” by the Platters. After mentioning songs by Garth Brooks (“Unanswered Prayers”), Dionne Warwick (“I Say a Little Prayer”), and Bon Jovi ("Livin’ on a Prayer"), Dylan praises the Platters’ lead singer, Tony Williams.

Dylan notes that, like many great singers, Williams crossed over from gospel to secular music. “He took his spirituality with him into the pop world,” Dylan writes. “You couldn’t picture this guy getting shot, bare-naked, in a motel room.” Then, picking up on the fact that “My Prayer” was based on a classical melody, he lists other examples of this approach, like Eric Carmen’s “All by Myself,” which borrows (steals?) from Sergei Rachmaninoff’s Piano Concert No. 2.

The book is visually stunning, printed on a substantial paper stock and illustrated with publicity shots of recording artists, vintage print ads, sheet music, movie stills, comic book covers, and other goodies. Not to mention lots of photos from the ‘50s and ‘60s showing people shopping for records. Many of the photos in the book are black and white, and more than a few could have come from Robert Frank’s landmark photography collection The Americans, portions of which were featured on the cover of the Rolling Stones’ Exile on Main St. Dylan is possesed of a keen aesthetic with regard to visual art (hey, he is a painter), not so far away from Warhol, Lichtenstein, and Rauschenberg.
And boy can Dylan turn a phrase. Not exactly a surprise, but it is a joy to come across passages like:

“The Platters…carry their sound with a cooler-than-thou looseness, offhand and urbane, exuding hipness the way James Dean exhaled cigarette smoke…”

“This song [“Keep My Skillet Good and Greasy”] melts everything down, browns it up and deep-fries it.”

“Another way to measure a songwriter is, are their songs still being sung? Townes [Van Zandt’s] are. Every night – in small clubs, in lonely bedrooms, and wherever the brokenhearted watch the shadows grow long.”

“Stephen Foster is the counterpart to Edgar Allan Poe. This [“Nelly Was a Lady”] is one sweeping song that is designed to make anybody who's ever lived a life just lie down and weep. This song will stay in your head long after you have forgotten the story and every time you hear it a tear will roll down your cheek.”

“Earnestness should not be confused with simplicity.”

Little Richard is one of the few artists to be featured twice in Dylan's new book The Philosophy of Modern Song,for "Tutti Frutti" and "Long Tall Sally."
Photo by Robbie Drexhage. Creative Commons.
The songs in the book do not appear to be in any particular order. But maybe there’s some sort of Dylanesque logic at work here. Or it could be that he wrote each song title on a piece of paper, threw them up in the air, and let chance dictate the sequence, much like a William Burroughs cut-up poem.

In his essay on “Black Magic Woman,” Dylan writes, “E.B. White had a saying about humor that seems applicable to music: Analyzing humor is like dissecting a frog. Few people are interested, and the frog dies of it.” Dylan has a point, but in this case, the musical analysis is welcome, and the songs seem to have survived the experience.
California Privacy Policy California Collection Notice
Do Not Sell My Info
Use of this website constitutes acceptance of our terms of use, our cookies policy, and our privacy policy The Houston Press may earn a portion of sales from products & services purchased through links on our site from our affiliate partners. ©2023 Houston Press, LP. All rights reserved.