Keep It Casual: Houston Summer’s Best Food and Drink Is All About the Chill Factor. 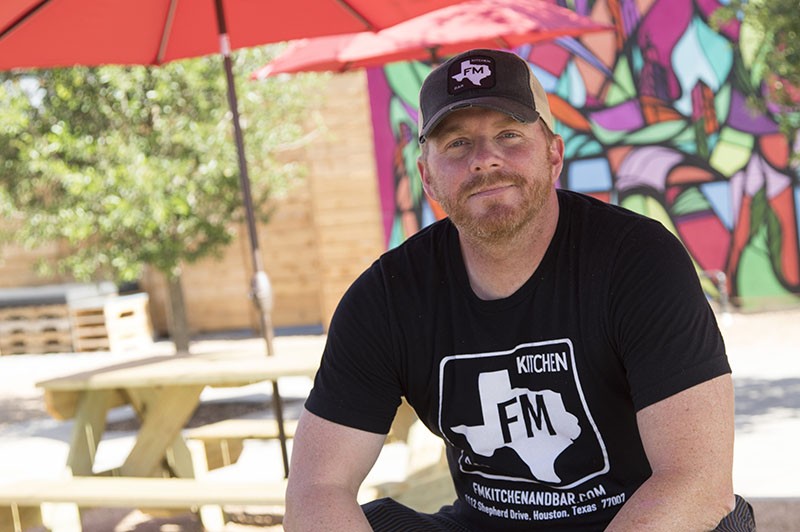 Photo by Troy Fields
Chef Ryan Hildebrand shifts gears with the casual new eatery FM Kitchen and Bar.
Your cutoffs are drenched and the shirt on your back is Rorschached with a sweat blob the shape of California. The sun is sinking in the sky, the throat dry, stomach doing its groaning thing. You aren’t going home to change or shower, but forging ahead. You need beer, a cocktail, a plate of food, maybe a friend or two, a seat at a picnic table where nobody will judge you for the fact that the pits of your shirt won’t dry out.

Such is the summer, and the best new spots in Houston right now are quite aware of your need to keep casual and play it cool. In fact, the best new places to eat this summer are actually just awesome bars, albeit bars with the added bonus of chef-driven food and, in some cases, a full-on beer garden.

In terms of trends, this isn’t solely a Houston phenomenon. Beer gardens have been popping up in droves from New York to San Francisco for years now, but Houston does have a deeper tradition of the beloved porch-hang than most cities, with its rich history of neighborhood icehouses, though it’s a legacy that’s steadily changing as the city’s demographics do. In 1998, The New York Times reported on the dwindling icehouses of Houston, along with a new customer base that included “a diverse group from construction workers to downtown office workers with cellular phones.”

By 2014, local food writer Nicholas Hall wrote of the modern icehouse: “Mutability is really its defining character” — the ability, that is, to change, to bring the neighborhoods what they want. In 2017 that seems to still ring true, but now it appears to be bleeding over into Houston’s dining scene more than ever before.

“Even if you’re talking about people with money to spend in Houston,” chef Ryan Hildebrand of newly opened FM Kitchen and Bar says, “it’s still oil money. It’s people who might do a high-end steakhouse a couple nights a week, but the rest of the time they want this.”

This being a casual affair, preferably outdoors.

“I’m not sure it’s necessarily a trend,” Better Luck Tomorrow’s Terry Williams even notes. “We’ve had places like Little Woodrow’s doing that sort of thing for a while. I think a lot of spots doing that have just opened all at once.”

Even so, nothing is more perfectly suited for summer dining and drinking than these five new spots, where you can relax inside or out.

There’s been a big shift to more casual dining,” Hildebrand says. It’s a sunny, breezy day in his brand new restaurant, FM Kitchen and Bar in the Heights. In fact, it’s opening day, but the chef is calm and collected. A woman and her two young kids trickle in, looking for lunch. “You can see it all over America. In New York, and definitely here in Houston.”

Hildebrand closed his fine dining establishment, Triniti, in January 2017 to the shock of the dining community and the restaurant’s regulars, but if there’s any inkling of regret, it remains rather untraceable when he speaks of its closure, shrugging it off with a smile and a kitchen towel slung over his shoulder. He has on an FM Kitchen apron with an FM Kitchen shirt underneath, no button-up required.

Smoked pork ribs are an early favorite among guests of FM.
Photo by Troy Fields

It’s a far cry from the tasting menu at Triniti, a spot that he in fact first turned to New York for inspiration in opening. Chef Daniel Humm’s highly acclaimed 11 Madison Park and Jean-Georges Vongerichten’s ABC Kitchen were two major influences. There weren’t really restaurants in Houston doing that sort of seasonal-tasting, menu-driven dining at the time, he says. “In a way, we were one of the first spots like that to open. When we opened it was just Tony’s and Mark’s. Then within 12 months came Underbelly, Pax, The Pass, Uchi. They just kept coming.”

They still do — high-end dim sum eatery Yauatcha opened just last month in The Galleria, and an upscale Israeli steakhouse, Doris Metropolitan, was announced for the Triniti space itself — and Hildebrand is quick to point out that Triniti’s closure may not be the harbinger of doom that some people want it to be, emblematic of some fine dining bubble that’s about to burst.

“Honestly, we got hit hard by that road construction on Shepherd,” he says. “It was bad. Once you’re off people’s radar, that’s it.”

Hildebrand decided to turn his attention to the FM Kitchen space, which his business partner owns, and bank on a more casual concept that’s family friendly. “Even at these Michelin-starred places in New York you’re now seeing chefs leave to go make pasta or something,” he jokes.

That doesn’t mean preparing a menu of comfort food favorites isn’t as difficult as busting out a nightly tasting menu. “People have ideas about what a burger or fried chicken is. It has to be executed perfectly. There’s a lot that goes into prep.”

His burger actually garnered attention during its debut on Triniti’s bar menu, and in fact, Hildebrand had originally planned to open a burger restaurant inspired by Shake Shack, but realized that FM could allow for much more. The menu reads like the best hits for day drinking accompaniments — queso, frito pie, tots — and the bar itself is ready for high volume with both beer and cocktails on tap, and affordable wines at $7 a glass.

The space is a former graphic shop that was more recently known as a graffiti landmark. Colorful bricks salvaged from the building’s previous life line the entrance and walkways. There’s a graffiti mural in the yard. Another heading to the bar area, and the restaurant space itself has huge warehouse-style windows that roll open, which give it all an open, laid-back feel.

FM Kitchen will likely be known for much more than its burgers. Wonky Power Records is booking live music and DJs for the weekends. Even now, a toddler makes a break for the yard, aiming for the cornhole beanbags.

“I look at it this way,” Hildebrand says. “I live in Oak Forest. I have kids. There are a lot of people who want to bring the family and enjoy some drinks and food. It’s a thing now.”

If you’re not into that family thing, there’s still another gem to look forward to here.

“The smoked ribs are an unexpected hit,” Hildebrand says.