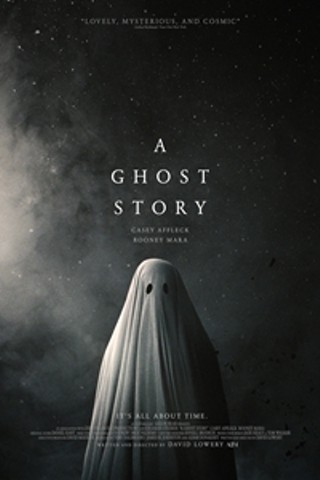 "Every love story is a ghost story," David Foster Wallace wrote, more than once. That evocative observation is probed in David Lowery's A Ghost Story, a film that occasionally reaches a similar level of eloquence.

Lowery's fourth feature reunites Rooney Mara and Casey Affleck, the leads of his second, the dolorous, stiff neo-western Ain't Them Bodies Saints (2013). In A Ghost Story, they play a couple, identified only as M and C. We first see the pair cuddled on the couch, their affectionate murmurings interrupted by a flash of ectoplasm on the wall. The spouses don't appear frightened, though, perhaps feeling that the cocoon of their intimacy provides unbreachable protection.

The opening -- and best -- scenes of A Ghost Story are animated by such moments of deep conjugal closeness. But too soon Lowery switches from the specific to the cosmic, as the screen fills with the star-filled heavens. A Terrence Malick epigone, Lowery also relies too heavily on that elder filmmaker's fondness for crepuscular light and time-toggling, impoverished signifiers of what Malick likes to call "life's journey."

An extremely unsophisticated device, however, proves strangely potent, at least initially: a white sheet in which eye holes have been cut out. This simple ghost costume adorns Affleck's character after Mara's identifies C's body at the morgue. M moves out, others move in, time rewinds and advances and doubles back again, Kesha makes a cameo: The ghost bears witness to it all and even makes a friend, a fellow sheeted spook, haunting the next house over. But after this meeting of wraiths takes a cloying turn, I found it difficult to continue suspending my disbelief. Lowery, in a way, had given up the ghost.
By Melissa Anderson

A Ghost Story is not showing in any theaters in the area.